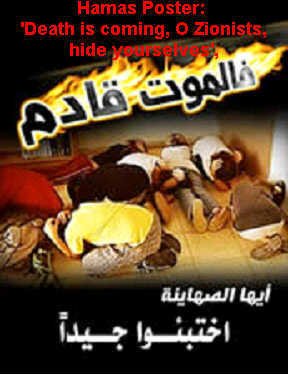 Maybe I get it now. I think I understand at last. There is a reason that the UN and the world howls with outrage when Israel defends itself against random attacks against its civilians by attacking the people who actually did it while the world seems to cheer on the Muslim attackers. I mean we all know most of the usual reasons. The UN has been badly corrupted by Islamics both in terms of oil money and influence and in terms of raw number of votes in the UN and so on but what about the average guy?

Well we also know that leftism and moral/cultural relativism have warped any common sense notion of values out the proverbial window. But even so, if we saw a poster like this anywhere in Israel we pretty much know what would happen. MASSIVE media campaigns all over the Islamic and western world.

So I have to wonder, what is the real reason for the double standard and then it occurred to me.

Maybe the left as well as all the other reasons listed plus several more that are not, are doing what we all do with say; dogs.

If a dog doesn’t urinate on your carpet after being alone for a few hours and you let it out and it pees outside we are all full of praise for it. I mean we clearly have a different set of standards for the behavior of a dog and will be wonderfully proud of it for things that would be scold worthy or banal even to the most mentally handicapped humans. Perhaps the problem is the left secretly have such a low low opinion of Muslims, Islam and Arabs that they feel that Western nations should have to hold a much higher standard when reciprocating.

If Palestinians launch a number of rockets randomly and without warning or even stated reason at Israel hoping to kill as many Israeli’s as possible and disrupt life and the psychology of life there as they can, well what do you expect right? its who they are. And when the Israelis reciprocate not by attacking random civilians for the pure horror of it but by careful calculations as to who did the attacks who planned them and where is the equipment stored to make them and then attack those, the world is full of moral outrage.

Wow. If I was Israeli I would be so proud.

The world holds me, I would think to myself, to a higher standard than they have to any other group in the history of civilization itself.

‘They must therefore think, that I am worthy of such a standard.’

All fine and good. Of course Israel has done so far an admirable job of living up to this higher standard and I would want no less from them. Israel is supported by the US and many western nations precisely because of this standard. Its what civilization demands of us.

However I think its time for the western left to stop being such cowards, racists and cultural relativists. Demand the same standard of raw humanity from the Muslim and Arab nations. Demand that women are treated as well and given as much freedom as they are in Israel. Demand that Muslim nations treat their minorities with equal rights before the law. Suggest to the US government that the new Iraqi constitution which denies the right of return to Jewish peoples who have their ancestry in Iraq for hundreds if not thousands of years is not the kind of document we would want to be fighting to protect.

In other words, if Muslims and Arabs are in fact equal to all other people in deserving of respect, then they are equal in what we expect from them.