I think the Americans might want to speed up that fence they are trying to build.

FOX NEWS… TEHRAN, Iran  —  Iran’s Mahmoud Ahmadinejad and Venezuela’s Hugo Chavez railed against the West on Saturday, pledging to deepen their ties and stand together against the United States and world powers the two perceive as imperialistic. 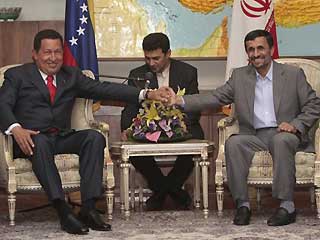 Chavez is on an 11-day tour that has taken him to Libya, Algeria, Syria and Iran. The leftist Venezuelan leader is also to visit Belarus, Russia and Spain in the trip he has described as a bid to build a “multi-polar world” and counter U.S. influence.

After landing in Tehran late Friday — his eighth visit to Iran so far — Chavez said Iran is “a true strategic ally, a staunch ally” to his country and defended Iran’s right to a nuclear program.

He praised Iran for standing up to alleged attempts by “Western forces” to destabilize it after the June presidential election that brought his ally Ahmadinejad a second term in office. These attempts have failed, Chavez said, and “Iran has been strengthened.”

During Chavez’s meeting Saturday with Ahmadinejad, Iran’s English-language state Press TV quoted the Iranian president as saying their two countries have “important missions to help the oppressed and revolutionary nations and to expand the anti-imperialist front in the world.”

“Time has passed for arrogant powers to have influence on revolutionary nations,” Ahmadinejad said.

Chavez and Ahmadinejad — both well-known for their anti-U.S. rhetoric — have forged ties in everything from finance to factories. Iran now manufactures cars, tractors and bicycles in Venezuela, and the deepening relationship has provoked concern in Washington.

Speaking to Venezuelan state TV on the phone from Tehran, Chavez defended Iran’s “sovereign right” to pursue a nuclear program, which the West fears masks nuclear arms making. Tehran, despite three rounds of U.N. sanctions over its failure to halt uranium enrichment, persists in the pursuit, insisting the program is only for peaceful purposes.

“There isn’t any proof that anybody can show that Iran is building an atomic bomb,” Chavez said. “We’re certain that Iran won’t give in to any blackmail.”

He said that Venezuela will also likely face such accusations in the future, as it is looking to develop “nuclear energy so that the Venezuelan people can also count on this marvelous resource for peaceful purposes.”

He also said that a newly founded Iranian-Venezuelan bank, based in Caracas, now has its first $200 million of capital and that the two countries are also discussing plans to tap crude and gas together in both Venezuela and Iran, and to jointly build two ethanol plants.