Although this article was posted by one of our other European authors, I felt it was worthwhile to post a brief forward to the article he posted.

In fact the Turks where the people who invented the idea of the final solution more or less as it was carried out in Germany under Hitler. The Turks informed the remaining Christians of Constantinople sometime during or after WW1 that they where to be sent out of Istanbul as the Turks call it, to be re-situated in Christian friendly lands. When they boarded trains and cattle cars they where taken to remote locations within Turkey and slaughtered as German officers looked on and reported back home.

The total number of murdered, in the order of one point five million peoples.

Anyone interested in details should consider purchasing the excellent comprehensive history of Islam, ‘Farewell Israel’ 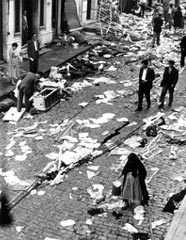 “Special Edition to commemorate the Pogrom of September 1955”“Ta Septemvriana”

“The events of September” or “Septemvriana”as they are known to the ethnic Greek inhabitants of Constantinople (Istanbul) to describe the pogrom that took place in that city fifty years ago on the 6-7 September 1955. On that horrific night, at least as intense as the Kristallnacht of 1938 in NAZI Germany, a Turkish Government orchestrated pogrom set out to physically destroy everything Greek in Constantinople. Wave after wave of frenzied mobs systematically destroyed: