Friday night’s campaign event in Munich, just two days before the election, was less than jubilant for the chancellor – see our videos posted eaerlier today.
We have translated an excerpt from a report of the event from Münchner Merkur. 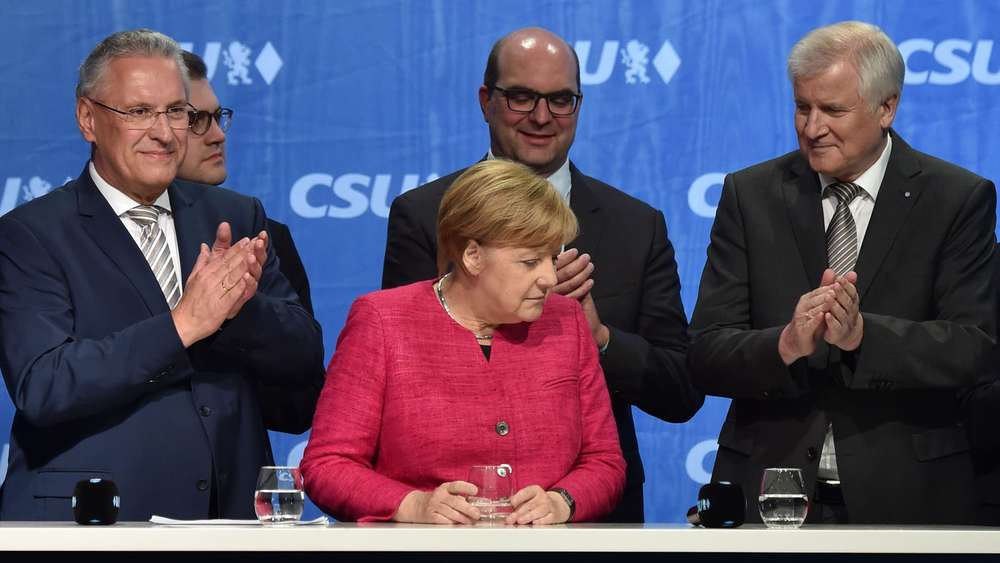 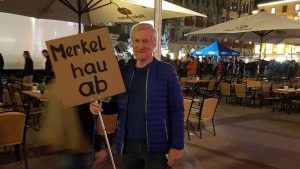 Merkur then go on to interview citizens at the event, like Helmut Strobler, a 72 year old local, who says: “These refugees all come to Germany because they know here they receive the highest social benefits. And I oppose that. We have had a lack in affordable housing for ten years now. And now we have one million more people. Where are these people supposed to live?”

Estranged Allies – Merkel and the CSU

In Munich, Angela Merkel was on foreign turf. She is the head of the CDU. But the CDU is not listed in Bavaria. The dominating party of Bavaria is the CSU, a conservative party leaning sligthly to the right. Their support is needed by the CDU, Angela Merkel’s party, to secure their dominating position in the German Bundestag, just as the CSU need the support of the CDU to extend their influence beyond Bavaria. The alliance of these two parties is called “The Union”.

Merkel’s turn to the left shook the relations within the Union. Currently, in the election phase, there is a ceasefire between the two estranged allies. Just how far CDU and CSU have drifted apart was visible though in the speeches given tonight by Merkel and Joachim Herrmann, the CSU candidate and Bavarian Interior Minister. (The following account of the speeches follows Merkur’s report, but we have slightly condensed it and re-arranged it in chronological order:)

6.58 PM: Angela Merkel speaks. Loud whistles and booing. The applause of the CSU followers fades markedly.
6.59 PM: Merkel to the protesters of Munich: „You can’t shape Germany’s future with whistles and shouting.“ Some in the audience flip the bird. Merkel needs to speak loudly, to get throught he whistles.
7.03 PM: The protests are louder than the church bells
7.06 PM: Merkel thanks everyone who helped in making the German reunification a success. Loud booing. The chancellor is almost yelling into her microphone.
7.15 PM: The CDU’s official twitter account posts a photo that suggests a completely different atmosphere than currently prevailing in Munich. Here, the chancellor Angela Merkel is still massively whistled.
7.17 PM: There is a confrontation between police and AfD followers. One man is arrested.
7.19 PM: In her speech, Merkel presented central election promises of the Union, like lower taxes, more investments in education, and an expansion of digitalization. She confirms that she wants to focus on familiy politics.
7.21 PM: As at every election rally, in Munich, too, Merkel thanks everyone who helps refugees. And as usual, the chancellor stresses that a situation like in 2015 must not repeat. But the protest is not ceasing.
7.27 PM: Merkel: „Everyone is proud of their own culture, their own dialect. It is our strength that we are so difficult and still united – we have many roots.“
7.33 PM: CSU candidate Joachim Herrmann speaks. He were happy about “most” guests. In a democracy, it is the majority that counts, not the volume level. Applause, but also whistles and boos.
7.35 PM: The CSU interior minister stresses Bavaria’s achievements in inner Security. The Union wants to make Germany the safest country in Europa.
7.37 PM: Joachim Herrmann wants an upper limit on refugees, and border controls. But the chancellor has got a different opinion on this. She repeatedly stressed that there will be no upper limit, and no border controls with her.
7.38 PM: Herrmann shouts into his microphone to drown the whistles. He stresses that more rejected asylum seekers have to be deported.
7.39 PM: Herrmann: „Yes, we stand by the Christian character of our country.“
7.40 PM: Joachim Herrmann says it were unbearable when refugees rape women. He is, of course, alluding to the current case of Höhenkirchen-Siegertsbrunn. (see our report: 16 year old raped in the open street by 3 Afghan ‘refugees’, Sept. 16)
7.50 PM: The finale of the election campaign ends in Munich with the singing of the Bavarian Hymn and the German national anthem.
7.55 PM: At the closing of the election campaign Friday evening in Munich, the chancellor repeatedly complimeted the CSU politics in Bavaria – and CSU chief Seehofer complimented Merkel’s governing as „good years“. Both were in their speeches widely ignoring the conflict about an upper limit for refugees of 200,000 per year, which the CSU strongly demands, and Merkel clearly rejects.