1. Lawyer who collapsed at hearing in Ottawa yesterday, indicated he had several shots of the DNA adenovirus injections from Astra Zeneca. The AZ is similar to the Pfizer, but uses actual DNA as opposed to double stranded RNA to trick your body into making the toxic spike protein and then tricking your body into attacking the spikes you make after the shot with antibodies. Details at RAIR linked above.

He's on the jabba train pic.twitter.com/ZdXaJ3DvlP

There’s an eeriness about ‘do-it-yourself death pods’ that are supposed to make killing yourself ‘peaceful, even euphoric.’ 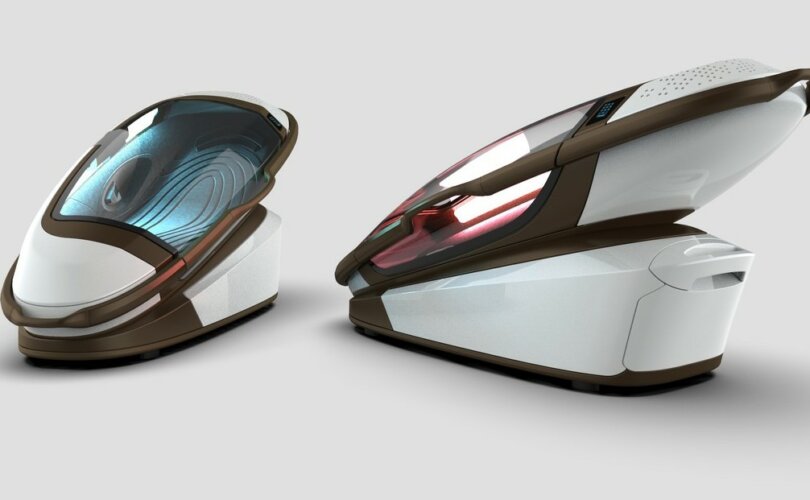 (LifeSiteNews) — The headline in the Scottish Daily Express succinctly summarizes the reaction to a recent invention by Australian Dr. Philip “Death” Nitschke: “Outrage as scientist backs gas chamber ‘death pod’ scheme for Scotland.” Nitschke has become notorious over the past several years due to his high-profile promotion of his “do-it-yourself death pods,” airtight capsule-shaped pods in which the suicidal can seal themselves and release a nitrogen gas that will knock them out in 60 seconds and kill them within 10. It is not as swift a death as the lethal injection method but does have the benefit of ensuring that other people do not have to be involved.

(Our objection is the same as lots of modern imposed attacks on the culture. From the metric system to Gay Marriage. While the arguments can be made compelling, at the end of the day its about pushing our culture away from everything sacred. From familial bonds, sexual practices, and the value and sanctity of life itself. Sorry, this is a bad idea.)

(Canada is being used as the cautionary tale for governments and rational journalists all over the world these days. Yesterday we posted a video where UK MPs specifically cited Canada as authoritarian in the Covid measures. Which it is. And still is. And will be more so soon)

In 1988, Canada officially became a multicultural country. “Did Canada culturally commit suicide?” a Catholic writer now wonders.
“Let’s not be surprised: for some years Canadian elites have dreamed of this scenario, hoping to make Canada a country of one hundred million inhabitants by the end of the century and they have just gone from dream to action”, writes Mathieu Bock-Coté, the sociologist star of French TV. “500,000 immigrants a year correspond to Canada’s vision of itself, a post-national country without an identity. The only identity is his cult of multiculturalism, which it presents as a celebration of diversity, which can even lead ot to pay homage to the niqab. Canada is engaged in an unprecedented ideological experience ”.

These days Canada is setting record goals in immigration history: bringing in 1.45 million immigrants by 2025 to help fill the labor shortage and demographic collapse. better than Italy with 1.4 births). However, it is a suicide). “Look, folks, it’s simple for me, Canada needs more people,” said Sean Fraser, minister of immigration. The new plan aims to accommodate 465,000 people in 2023, rising to 500,000 in 2025 and already 405,000 people are revenue last year, which was “the most we’ve ever had in a single year.” The New York Times explains that in the two largest cities, Toronto and Vancouver, 60 percent of the population in just ten years will be from ethnic minorities.

4. A woman in Brazil apologizes (under duress it sounds like) to a drug dealer for posting videos supportive of Brazilian President (cheated out of the election recently), Jair Bolsonaro. After she gives her confession, the dealer goes MAO on her and explains he will punish her anyway.

5. Dr. James Thorp MD published this PDF. Essentially a blanket condemnation of the use of untested gene therapies on pregnant women. He details exactly why he condemns it. Please download, read, and spread should you be so inclined. A sample below:

This IS the greatest disaster in the history of obstetrics and all of medicine. I testify that this unwarranted experimental gene therapy was NEVER indicated in pregnancy and was perpetrated unlawfully and with falsified data. Res ipsi loquitor. The facts speak for themselves. It was known by Scha?dlich et al as early as 2012 that lipid nanoparticles (LNP) concentrate in the ovaries of mice and Wistar rats. The FOIA request of the Japanese Pfizer biodistribution studies confirmed that within 48 hours the “vaccine” was immediately absorbed into the bloodstream and concentrated in the ovaries 118-fold by 48 hours and the trajectory would have risen even higher had the animals not been sacrificed at 48 hours. This experimental therapy may have permanently damaging effects on the human genome for multiple generations or perpetuity and makes diethylstilbestrol pale in comparison. It was incumbent upon the stakeholders to have excluded long-term effects prior to rolling this novel experimental gene therapy out. The long-standing golden rule of pregnancy has NEVER allowed unknown substances to EVER be used in pregnancy.

A preborn baby near term-limited (gametes or germ cells) for her entire lifetime – only one million ova (eggs). Men’s gametes (sperm) are continuously produced throughout life with estimates of over 20 million per hour. As argued in 2020, COVID-19 inoculations were NEVER necessary for pregnancy because there were ample data demonstrating that alternate therapies were available. Unfortunately, this truthful long- standing evidence was suppressed, altered, buried, and villainized by the medical- industrial complex for the sole purpose of paving the way for a lucrative experimental gene therapy masqueraded as a “vaccine”.

The narrative that the vaccine must be pushed in pregnancy is supported by many experts in part because of the long-held belief that pregnant women have diminished immune function to accommodate the fetus and are thus at much greater risk of dying from viral pneumonia. Maternal Fetal Medicine physician Beth Pineles in 2021 documents that pregnancy does not predispose to morbidity and mortality from viral pneumonia but lessens the risk.

Thank you all for your continued efforts to understand the events shaping our liberties today.

Please remember this when you watch tonight’s Tucker Carlson program One Reply to “The continuation to force the culture towards a cult of death: Links 2, November 10, 2022”