1. Curious motives for Palestinians to cheer for Russian attacks against Ukraine

Singers at a Palestinian wedding encourage Putin to increase attacks in Ukraine, forcing Ukrainians to flee abroad and making it possible for Palestinians marry Ukrainian women.

GUNTER: More falsehoods about the convoy are now being retracted

The CBC has retracted a second story it reported about the Freedom Convoy that turned out to be fake.

The first was the absurd allegation that somehow Russians were behind the scenes pulling the convoy’s strings in an effort to destabilize the Canadian government.

On the Jan. 28 edition of CBC’s Power and Politics, host Nil Koksal asserted, “there is concern that Russian actors could be continuing to fuel things as this protest grows or perhaps even instigating it from the outside.”

There was no Russian involvement, nor, as it turned out, any involvement by any other foreign power. Financial investigators couldn’t find a conspiracy by white supremacists, either – another of the Trudeau government’s biased allegations that the CBC swallowed whole.

A second CBC news story, that was corrected this week, involved allegations made by the Prime Minister’s Office (PMO) and by Finance Minister Chrystia Freeland, that the convoy could only have raised all the money it did (nearly $10 million, twice, on two different crowdfunding platforms), as quickly as it did, if powerful international interests were funnelling in large sums.

(I’d like to present three views on this. First, Johnny U. who posted this item to Reader’s Links:

Comment:
The mistake this reporter makes is believing the CBC was duped by the PMO. Given its history for propagandizing it deserves no considerations for plausible deniability.

Secondly, and not a contradiction but an augmentation to the above comment, what a friend of ours from UA might say about the CBC retraction if I were to extrapolate and interpret from his reasoning as I understand it.

The legacy media wants us to know that they are always in command of the narrative that includes when it appears to agree with us. Their message is that at no point will people be able to get ahead of a fabricated and weaponized narrative. If CBC for example, is putting material out there that agrees with what we all knew to be true, and maybe even doing it faster than we could have, which is sometimes the case, its not because of a change of heart, but in order to let us know the narrative is an engine which pulls our sleigh and way too fast for us to ever get off or more importantly, steer it.

Then my own take. Which agrees with the other two, but adds this:

At best the CBC is trying to do a tactical retreat. The damage they tried to do was successful and has already been done. They need to get back out in front by seeming to admit what was true, way too late for it to have any impact on the government’s plans to dismantle the protest or save any freedoms. So making these admissions now is like recharging a rifle. They are trying to suck back some credibility so the next time they attack truth and reality with a mass line narrative attack, right out of Mao’s little Red Book, they can be effective again. For proof of this, consider the difference between when it was easily known that there was no foreign funding of the Trucker protest. Answer to that would be one minute after the hack of all donors. Which was clearly done by a leftist anti-freedom activist, but ironically destroyed one of the mass line narratives. CORRECTION: SHOULD have destroyed the mass line narrative attack but in reality did not. CBC did not correct that story till the week of March 12.

The hack itself was on or before February 14 as was the leak of all the names of the contributors. This means the CBC correction is fully part of the weaponized information warfare machine which is now the sole nature of the CBC.)

Why does this keep happening? In France, a Muslim quoted Qur’an while raping his victim. A survivor of a Muslim rape gang in the UK has said that her rapists would quote the Qur’an to her, and believed their actions justified by Islam. Thus it came as no surprise when Muslim migrants in France raped a girl and videoed the rape while praising Allah and invoking the Qur’an. In India, a Muslim gave a Qur’an and a prayer rug to the woman he was holding captive and repeatedly raping. And the victim of an Islamic State jihadi rapist recalled: “He told me that according to Islam he is allowed to rape an unbeliever. He said that by raping me, he is drawing closer to God…He said that raping me is his prayer to God.” In India, a Muslim kidnapped and raped a 14-year-old Hindu girl, and forced her to read the Qur’an and Islamic prayers. In Pakistan, another Christian woman recounted that her rapist was also religious: “He threw me on the bed and started to rape me. He demanded I marry him and convert to Islam. I refused. I am not willing to deny Jesus and he said that if I would not agree he would kill me.” Rapists demanded that another girl’s family turn her over to them, claiming that she had recited the Islamic profession of faith during the rape and thus could not live among infidels.

5. Zelensky asks to address Yad Vashem – but is rebuffed

The report claimed that Yevhen Korniichuk, Ukraine’s ambassador to Israel, met with Dani Dayan, the director of the Yad Vashem Holocaust Memorial Museum, on Sunday, and forwarded a request from Zelensky, asking that the Ukrainian president be allowed to address the museum by video.

The address would feature Knesset Members, mayors from across Israel, and prominent Israeli public figures.

Dayan reportedly turned down the request, saying that while he identified with the plight of Ukrainians during the Russian invasion, the museum would be unable to host an event which would effectively be political in nature.

A senior Ukrainian official was cited as saying that President Zelensky hoped to use the address as a means of addressing Israelis and Jews worldwide.

Where does Ukraine get off feeling so entitled to make demands on the State of Israel? Because they were politically correct, elected their equivalent of Barak Hussein Obama?

In 2020 and 2021 – while Z was president – there were 17 UN resolutions against Israel.
There were only 7 against ALL the other countries combined.
Ukraine voted AGAINST Israel 13 times and abstained 4 times.

Thank you all for your contributions to this effort today and on the weekend. The stakes are clearly going up. But no matter what decisions we all make, knowing the truth is critical to making them for whatever interests we may have. Perhaps its time to watch Gone With the Wind again. There was something about Rhett Butler’s character that always fascinated me. He seemed to be the only charachter not driven by a narrative, and therefore, the only one with free will. Which allowed him to play the entire war like a poker game where he knew all the other player’s cards. At the end, (spoiler!) he decides to join the conflict not because its right or because he was on the winning side, but for reasons of emotional attachments, which at another level he eschewed. So at the end, knowing the truth may or may not mean people who know it make the best decisions from an ethical PoV. But its still better to know it. 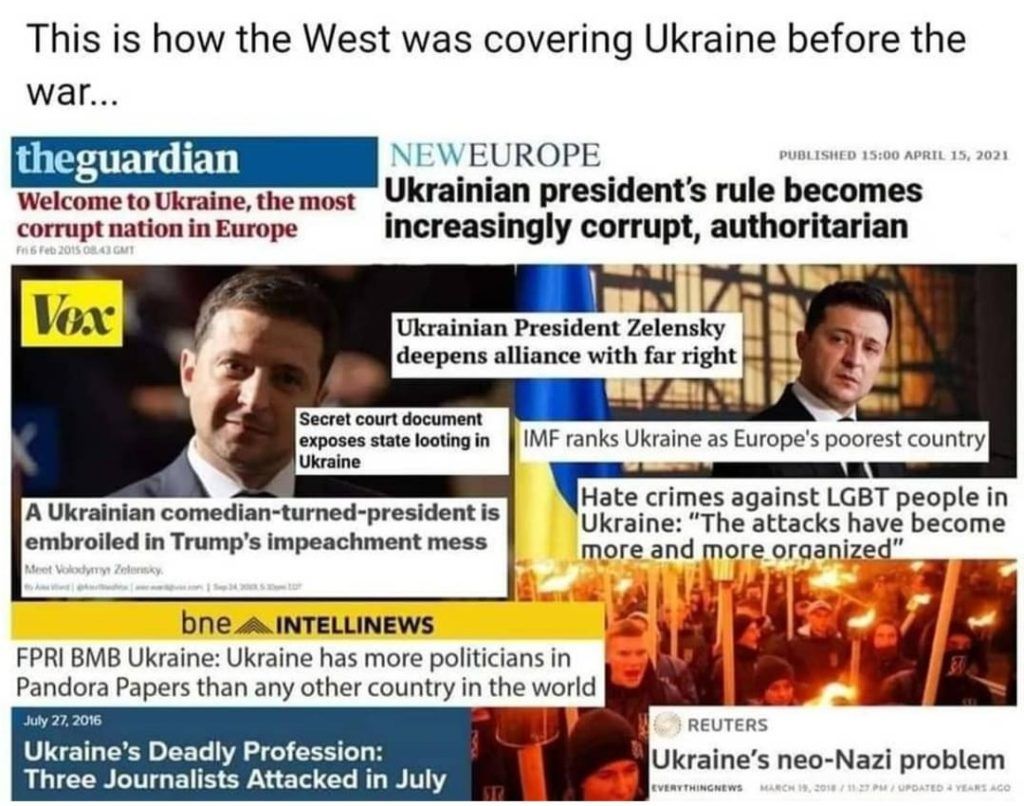