The following post is entirely by Kalloi, a Hungarian and highly skilled and knowledgable contributor to VladTepesBlog as well as the related Mastodon Pod. Please everyone follow him there.

I am sending a ton of videos from Ukraine. These are leftist in nature (against my best intentions) for two reasons: (1) they were collected by major leftist / globalist Hungarian media outlets (because they have the most resources so they are the quickest) (2) what we are witnessing now is just the kinetic Russian reaction to years /decades of serious assaults and abuse by the PTB against Russia and Russian people living in Eastern Ukraina; but THAT abuse was of course not in the news. It is much like the commie tactics against the Freedom Convoy in Canada: “annoy your victims to death and when they finally strike back in defense, call them Nazis so that you have an excuse to crush them”.

I guess the Marxist West desperately wants bloody pictures, but Russia seems to be executing a bliztkrieg by hitting mostly military targets with high-precision weapons, with overwhelmingly superior force.

I have attached my favourite photo: People are taking shelter, allegedly from expected Russian air strikes, in the underground facilities of the Kyev metro — and some of them seem to be wearing the NWO-muzzle (mask) even there. An impressive memento of the present era. 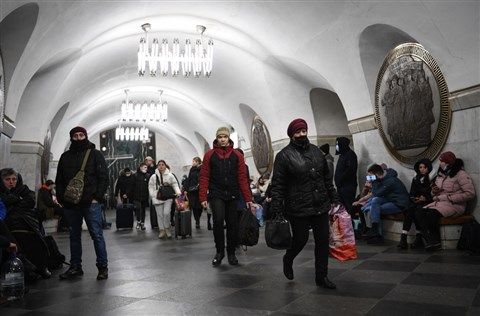 A cruise missile fired by the Russian army fell on Kiev #Ukraine#Russia pic.twitter.com/x0Cty5sDjX

There are many kilometers of traffic jams at the exit from Kiev, people are leaving the city, The Insider reports.#Russia #Ukraine #Kiev #Kyiv #RussiaUkraine pic.twitter.com/Rd8wIrTuG7

footage of outgoing fire in Belgorod, just across the border close to Kharkiv.#UkraineRussiaConflict #RussiaUkraineCrisis pic.twitter.com/uATayOLFRG

Currently situation in my city. That's Ivano-Frankivsk, 300 km from Poland, NATO state, and who what to tell me that would be different and we need to refuse from our wishes to become NATO member. pic.twitter.com/oSqkikQXxC

Major explosion after a Russian attack on a Ukrainian weapons depot in the city of Vinnytsia in Western Ukraine. pic.twitter.com/46kxpfxie0

These are some of the first images of Russian troops entering Ukraine, verified by The New York Times.

4 Replies to “A ton of videos from Ukraine”