1. This first item took some thought. But now that Dr. Robert Malone has posted it, that authority enough for me.

What if the largest experiment on human beings in history is a failure?

A seasoned stock analyst colleague texted me a link today, and when I clicked it open, I could hardly believe what I was reading.  What a headline.  “Indiana life insurance CEO says deaths are up 40% among people ages 18-64”.  This headline is a nuclear truth bomb masquerading as an insurance agent’s dry manila envelope full of actuarial tables.

People frequently write to Jill and myself. People we have never met.  They call, they arrive at the farm by appointment or unannounced, they fill our email in boxes with their inquiries. They all want something; time, attention, an interview.  Many want to tell us about their fear, illness, nightmares, or (what often seems like) outright paranoid conspiracies.  And then, over time, these fears and “conspiracies” keep getting confirmed.  As Jan Jekielek (a senior editor with The Epoch Times) recently said to me, it is getting harder and harder to tell which ones are mere conspiracy theories and which are true reality.

From The Center Square: Indiana life insurance CEO says deaths are up 40% among people ages 18-64

(The Center Square) – The head of Indianapolis-based insurance company OneAmerica said the death rate is up a stunning 40% from pre-pandemic levels among working-age people.

“We are seeing, right now, the highest death rates we have seen in the history of this business – not just at OneAmerica,” the company’s CEO Scott Davison said during an online news conference this week. “The data is consistent across every player in that business.”

OneAmerica is a $100 billion insurance company that has had its headquarters in Indianapolis since 1877. The company has approximately 2,400 employees and sells life insurance, including group life insurance to employers in the state.

Near the train station, he stabbed a woman in the stomach several times and then raped an 18-year-old girl a few streets further away.

The Czechs are furious. pic.twitter.com/e2Fti7CBd9

3. I have a lotta tabs open on a lotta browsers, sometimes for months trying to make sense of the contents. Sometimes, I don’t quite get what I’m looking at, and then an event occurs or another story happens that makes perfect sense of it, then i can post it. And sometimes, I just keep looking at it till I close it. This time, I can’t let it go. This story is so deeply an example of enemy propaganda, and how the state has turned against its citizens, I just have to post it and hope others make sense of it in the comments.

BRUSSELS/BANGKOK (Reuters) – Tens of millions of migrants may be denied COVID-19 vaccines from a global programme because some major manufacturers are worried about legal risks from harmful side effects, according to officials and internal documents from Gavi, the charity operating the programme, reviewed by Reuters.

Nearly two years into a pandemic that has already killed more than 5 million people, only about 7% of people in low-income countries have received a dose. Vaccine deliveries worldwide have been delayed by production problems, hoarding by rich countries, export restrictions and red tape. Many programmes have also been hampered by hesitancy among the public.

The legal concerns are an additional hurdle for public health officials tackling the coronavirus – even as officials say unvaccinated people offer an ideal environment for it to mutate into new variants that threaten hard-won immunity around the world. Many COVID-19 vaccine manufacturers have required that countries indemnify them for any adverse events suffered by individuals as a result of the vaccines, the United Nations says.

4. Cape Cod children aged one and six are left orphaned after their married teacher mom and project manager dad both die days after Christmas because of ‘medical conditions’

(“Died suddenly” appears to be code for vaxx deaths, as “Asians” in the UK is to Muslims, and “Youths” in France are to Muslims.)

Two Cape Cod children, aged just one and six, have been left orphaned after their parents both died suddenly just days after Christmas due to ‘medical conditions’.

Chris and Michele King, from South Sagamore, both passed away the week of December 27 and are survived by their two children: Six-year-old Josephina – JoJo – and one-year-old Miles.

Chris’s sister Nicole announced the couple’s death on the Bourne Residents Facebook page. ‘Our big brother, Christopher, and his wife, Michele, both passed away this week.

No further information on the couple’s medical conditions have been given, and it is unclear if they’d been ill in the run-up to  their deaths.

It also remains unclear which day of the week Chris and Michele died, or if they passed on the same day.

Bourne Police Lieutenant Brandon M Esip told The Enterprise that neither death was the result of a crime, but did not comment further. 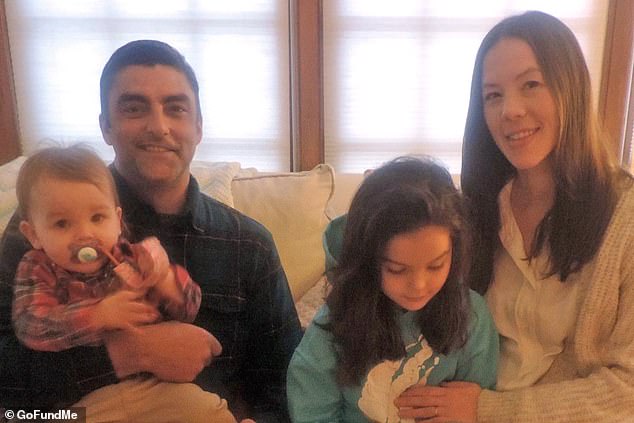 5. I know its past the holidays, but this is still pretty revealing. Anyone who has not watched the series called, “Dopesick” on how the various US federal health departments got a ton of Americans hooked on Oxycontin, or the movie, the Dallas Buyer’s Club, about how the same departments headed by the same guy, killed a lot of people with AZT may wanna do so before getting a “booster”.

Thank you M., Johnny U., MissPiggy, Sassy, PC., Yucki, and MANY more here and at our Mastodon pod.

(By the way, there is a chance that this mastodon pod experiment could bear real fruit. Hopefully I will have news within weeks.)

This is interesting. Youtube deleted our channel there something like 3 years ago now. But recently, within the past 2 weeks, I have been getting notices from the enemy propaganda people at Youtube, admonishing me for videos that were taken down with the channel! WTH right!?!?! So today I got another email from Youtube giving me polite hell for a video they took down with the channel back in or before 2019, so I thought I would restore it to Bitchute: