1. Putin’s Russia is a lot less communist than Canada. In fact it seems downright anti-communist

2. CORRECTION: German police pepper spray a baby. This is in Schweinfurt yesterday.

(People shout to the police: Shame on you, and the woman calls out for a Doctor.) 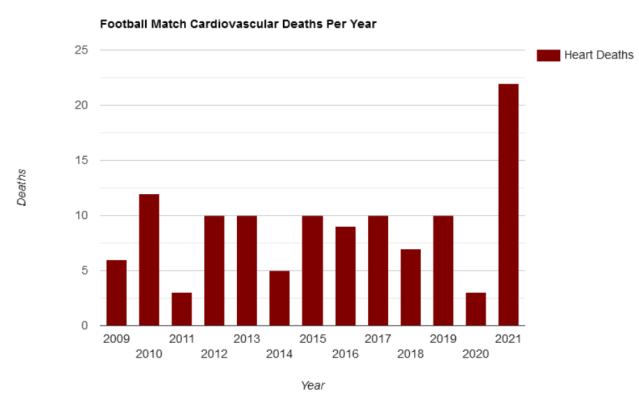 278% increase in Worldwide Heart Attack Deaths among Soccer Players in 2021 so far.

If there was no Covid ‘vaccine’ and all of these professional footballers were collapsing with heart issues at this current rate everyone would be alarmed and call for an investigation.

In other words, the fact that there is no investigation means we all know what is causing it but are not allowed to say.

OMICRON breaking through all prior forms of immunity both natural and vaccinated. MILD and BRIEF syndrome. Pulmonary involvement is rare but when it occurs is easily treated. Expect risk of hospitalization and death will be very low. https://t.co/B6of51FfNI pic.twitter.com/AxcLHxZ5SL

5. This is an example of communist rhetorical devices so perfect an entire essay could be done on it. And should be. Note the music in the background. This is clearly not meant to be good wishes for anyone. This is meant to be insulting, destructive to American traditions and beliefs, and a replacement for them which is utterly meaningless. From the mayor of Chicago.

The original lyrics to the song in the background. Did they just say, “just grab some generic Christmas music”? Or was this a deliebrate choice as its so specific to the exalted position of Jesus Christ?

Stephen Coughlin points out that Multiculturalism is a dialectic device with which to destroy all cultures. The video with Mayor Lightfoot is an awesome example of exactly that. Take the most important time of year to at least 2 religions, and wipe them out with health protocols while acting like the only day of significance is an utterly synthetic one.

But what is Kwanzaa anyway?

The man who created the holiday, Maulana Karenga, described the 2019 celebration as “An All-Seasons Celebration and Practice of the Good.” The problem with that statement is that Maulana Karenga is anything but good. He was convicted in 1971 of torturing two women who were members of US (United Slaves), a black nationalist cult he had founded.

A May 14, 1971, article in the Los Angeles Times related the testimony of one of the women regarding her torture:

“Deborah Jones, who once was given the Swahili title of an African queen, said she and Gail Davis were whipped with an electrical cord and beaten with a karate baton after being ordered to remove their clothes. She testified that a hot soldering iron was placed in Miss Davis’ mouth and placed against Miss Davis’ face and that one of her own big toes was tightened in a vise. Karenga, head of US, also put detergent and running hoses in their mouths, she said.”

6. This is a highly revealing interview with 50 year veteran pilot for Qantas airlines. Many solid points made which establish that we have left the planet of evidence based law and order.

Thank you all who posted to the Mastodon Pod, as well as the comments on this site and are trying to make sense of what is taking place across all of Western civilization.

12 Replies to “Six data points on the real nature of Western Civilization as of December 27, 2021”