1. As the pandemic raged, at least 75 lawmakers bought and sold stock in companies that make COVID-19 vaccines, treatments, and tests

Dozens of Republican and Democratic lawmakers on Capitol Hill have invested in companies that have a direct stake in the nation’s response to the COVID-19 pandemic, according to an Insider analysis of federal financial records.

In 2020, at least 13 senators and 35 US representatives held shares of Johnson & Johnson, the medical behemoth that produced the single-shot COVID-19 vaccine that more than 15 million Americans have received.

At least 11 senators and 34 representatives also held shares in 2020 of another COVID-19 vaccine manufacturer, Pfizer. Two representatives or their spouses held shares of Moderna during the same year that the world went on lockdown in response to the pandemic.

Lawmakers held these investments in COVID-19-minded companies as Congress was at the center of pandemic relief efforts. In 2020 and 2021, members of Congress voted on six relief bills together worth nearly $6 trillion. Congress also authorized more than $10 billion to help drug companies develop and distribute vaccines and forced health insurers to cover the cost of getting the shot.

(Before we jump to a Qui Bono explanation of events based on this, consider that the other possibility is that the government for other reasons decided that all roads must lead to the vaccine, and so they decided to make a little dough while they are at whatever other agenda is in play)

2. The interview of Dr. Peter McCullough is now live on Spotify. This is a great thing. But as you have to NOT use a VPN to watch it, and you do have to register an account, Ill pass for now. But bits of it are surfacing here and there and they are brilliant. Millions of people are tasting the Red Pill now.

3. The UK is not giving any details of the one alleged Omicron death they are using to justify the obliteration of individual rights.

5. First US soldiers get the boot for refusing Covid vax

Over two dozen US Air Force service members have been discharged for refusing to get vaccinated against Covid-19 – the first in the US military to be punished over President Joe Biden’s vaccine mandate.

The 27 airmen who had been discharged from the force for missing the vaccination deadline were “younger, lower-ranking personnel” and were serving their first term of enlistment, Air Force spokeswoman Ann Stefanek told the media on Monday.

Unlike others in the US military who have sought religious and medical exemptions from the mandate, the dismissed airmen did not seek any exemptions, she claimed.

Their reason for discharge was officially disobeying an order, however it is not clear whether they received honorable discharges.

Reports indicate that as many as 40,000 US military personnel have refused vaccination against Covid-19 or sought an exemption – roughly 3% of troops.

There are reports of a doctor who was arrested and forced into a mental health facility in BC. Rumour has it, he helped people get medical exemptions for the mRNA injections.

This is not without precident as a Covid authoritarian measure. It happened in Germany to a lawyer just for speculating in public about the authoritarian nature of Covid regs.

Here is a link to a related video of a phone call between that lawyer from inside, to her sister.

As for the British Columbia doctor, all I have is some images and claims. No links to anything I can even figure out how to post.

The doctor who was allegedly taken into a mental health facility, is called Dr. Mel. He was apparently medicated with IM Loxapine against his will. but I also have word that he has been released now. I have zero in terms of links or other forms of verification. At this point the best I can do is say that based on what has happened to other doctors in Canada and Australia who have attempted to practice real medicine as opposed to the top-down edicts of this current tyranny under the rubric of Covid19, it seems likely enough to post. Real medicine in this case, is probably giving exemptions to people who do not want the vaccine, and have a good reason not to take it. 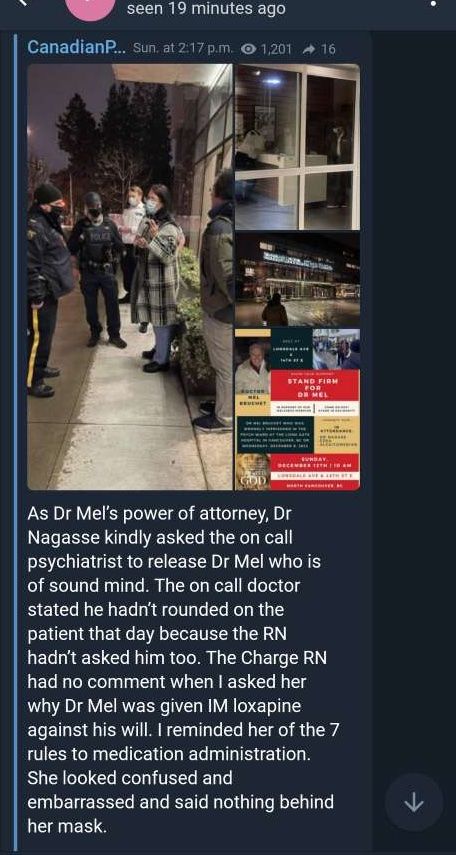 7 Replies to “Omicron, Peter McCullough, and did a Canadian doctor get forced into a mental facility: Links 2, December 14, 2021”