1. 17-Year-Old Healthy Hockey Player Passes Away in Canada Weeks After Jab — Father Is Devastated After Loss

A 17-year-old Canadian boy died from complications of the COVID-19 vaccine two weeks after receiving his injection.

Sean Hartman suffered multiple health problems after the shot and then passed away two weeks later. Sean Hartman is said to have suffered from “multiple” health problems “immediately” after the jab, including myocarditis, or heart inflammation. He received the COVID jab in order to be able to play hockey in an arena where the shot is required for entry.

(A gentle reminder. Neither the government nor the drug companies, nor the bureaucrats who forced them to get the shot nor the medical person who gave the shot or anyone in the chain will bear any consequences or responsibility for what happened to this young man or any of the people who suffered consequences from the shot. They will however, all be paid. Some of them a lot. But this man lost his son, and his son lost his life. I would bet odds that the government would use its paid thugs to stop this man should he decide to protest outside a vaccination centre though. Because the truth is anathema in a communist society, and increasingly, that is what we are becoming.)

(For most of the day, we removed this item from this post as there was issues with the security of that site that made it appear as though this may be a fraudulent site, or a phishing site to get critical details about RCMP officers who may be against the Trudeau fiat forced vaxx mandates. But it appears to be legit, and here is a link to an interview with the actual officer who started this site. There are still security issues with the site, and we would advise any RCMP officer NOT to provide their government ID numbers through this site as asked, until that is cleared up. Here is a second interview as well. Have not seen that one though. Watching the first one now, done with Keean Bexte.

For balance, not all police are paid state thugs. In fact in interviews I have done personally, I was informed that the reason Canada is not Australia is because police refused to obey tyrannical orders overall, so politicians retracted them as they don’t want to look bad issuing orders not obeyed. Which shows the politicians behind all this are not altogether stupid or naive. Groups like Stand on Guard for Thee are groups Canadians should be and can be very proud of, and support. And now, a new one was brought to the attention of this site.

We respectfully submit this open letter to express our most sincere concerns and resolute stand against the forced coercive medical intervention of Canadians, and against the undue discrimination experienced by those exercising their lawful right to bodily autonomy. We are not against vaccinations, but as law enforcement officers, we cannot in good conscience willingly participate in enforcing mandates that we believe go against the best interests of the people we protect.

As Canadians, our constitutionally-protected freedoms precede the government, and may only be temporarily limited if the majority of evidence justifies such infringements as reasonable, provable, and guided by law. If presented with all available evidence in a court, we firmly believe the government implemented mandates would not hold up under scrutiny.

As experienced investigators, we look past what information is provided and focus on how the information is presented. A proper investigation should be conducted as objectively as possible, and follow the principle that it is better to have questions that cannot be answered than to have answers that cannot be questioned. A complete investigation must include full disclosure of all the facts of the case, even contradictory evidence. Why, then, is there little to no tolerance for free and open debate on this matter? Many credible medical and scientific experts are being censored. Accordingly, we rightly have concerns about “the science” we are being coerced to “follow”.

As law enforcement officers, we already face higher levels of stress and mental illnesses due to the nature of our work. These have been compounded – considerably – by mandates that we believe are deeply unethical, threatening our livelihood, and dividing society.

As federal employees, what is being done to mitigate this stress? Moreover, what assurances are we given that the injections will not cause short or long-term side effects? What steps will be taken to ensure members are compensated for adverse side effects?

Police officers are expected to preserve the peace, uphold the law, and defend the public interest. We strongly believe that forced and coerced medical treatments undermine all three and, thus, contradict our duties and responsibilities to Canadians. We remain loyal to the Charter and Bill of Rights and ask you to send investigators to collect statements from medical professionals (and other reliable witnesses) who allege they have been silenced – putting lives at risk. Allow us to make this information publicly available to all so the public can scrutinize it and achieve informed consent.

The entire document is stunning. Please click through the link above and read it all.

These psychopaths will never stop, AND

they're getting kickbacks from Big Pharma:

"Instead of herd immunity being reached with 85% of residents with 2 doses of a COVID-19 vaccine…science table (now requires) when 95% have 3 doses." https://t.co/IrBkQE2b3f

5. The Rebel has a series of interviews of restaurant owners that refuse to submit to illegal discrimination. Here is a link to one, and another embeded below. Gotta say, some of these people are much better informed and much more reasoned than those who support the mandates.

Thank you all, Christine, M., Johnny U., Xanthippa, Kiki, Todd S., EB. and MANY more who are and have supported this effort in many ways, and in many more, supported what has become a dangerous fight just to know what is true and make informed choices about so many things. 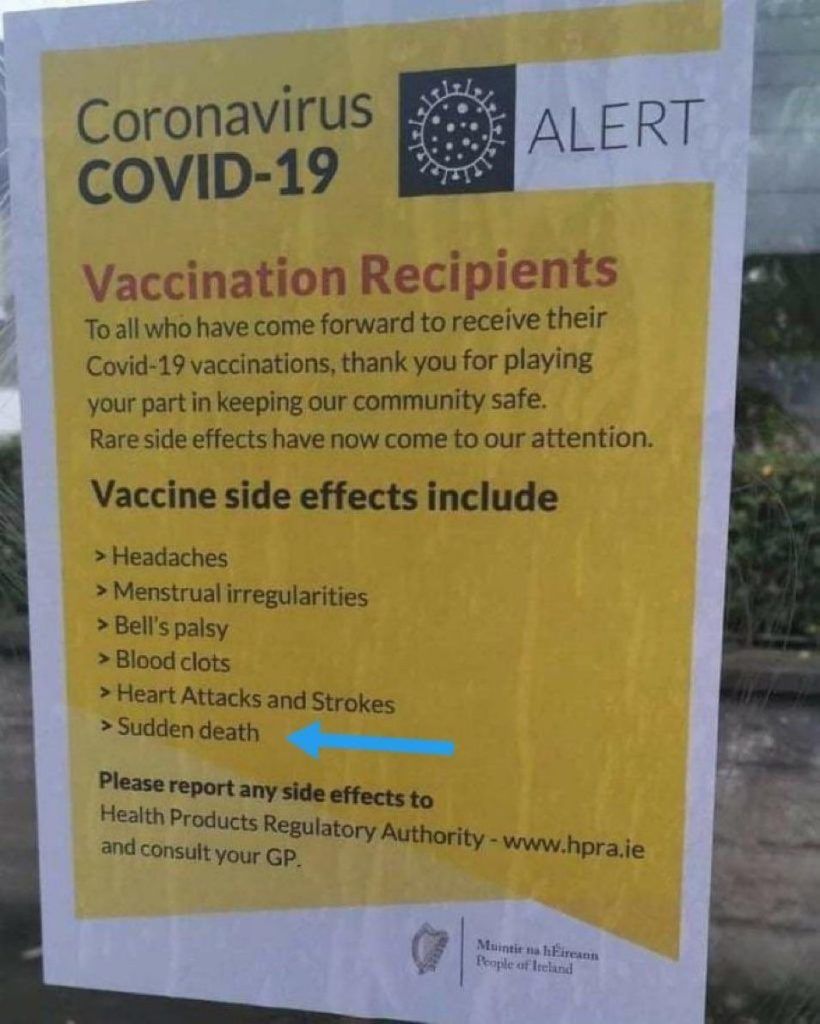