A student at an $80,000-a-year ultra-liberal Oberlin College in Ohio claimed in an op-ed that he was left ‘angry, scared, and confused’ because ‘cisgender men’ installed a radiator in his ‘safe space’ dormitory.

Peter Fray-Witzer, a student enrolled at Oberlin College, posted an article in Friday’s edition of The Oberlin Review in which he takes school administrators to task for giving him short notice about the installation.

Fray-Witzer writes that he asked a campus official if he could be exempt from having a radiator installed in his room so as to avoid the ‘intrusion.’

He also complains that he felt ‘mildly violated’ and ‘a little peeved’ when the contractors returned to his dorm room the next day to ‘check the insulation.’

(I used to be very for fiat currency. But increasingly I realize that the government’s ability to just invent money and direct its use, has led to all problems where there is a deviation from reality. When you can invent money, the consequences of bad policy is delayed to the point where it can do a staggering amount of damage.)

A hospital in Minnesota confirmed it temporarily shut down its emergency room and urgent care facility due to a nurse strike.

Allina Health, located in Plymouth, told The Epoch Times that due to the strike, emergency and urgent care services at its WestHealth location were suspended from Sunday morning until Wednesday.

“No other services on the WestHealth campus have been impacted,” Allina Health’s statement said before it redirected people to seek urgent or emergency care at its Abbott Northwestern Hospital Emergency Department and other locations.

The City of Plymouth also confirmed that the hospital’s emergency room and urgent care facilities were shut down, releasing a list of nearby locations for emergency services on its website.

(For sure the most important thing to do during a deadly global pandemic is to piss off enough of your medical staff who have worked overtime for 2 years with no special protection, to the point where they go on strike. Unless…)

3. UK GOVERNMENT DOCS: 70% of dead from Covid are FULLY VACCINATED

If you are double jabbed, don't listen to this ?pic.twitter.com/JK8EewL9Fj

(The editor took out the part after the google search where they selected the right thing to look at that document. Here it is! Look at Table 4 page 14! to try and find it. It is an extremely important claim, and while I trust both Joe Rogan and Alex Berenson, I subscribe to his substack, the UK data would be great to post to verify this claim. Here are a few more clips from that interview: 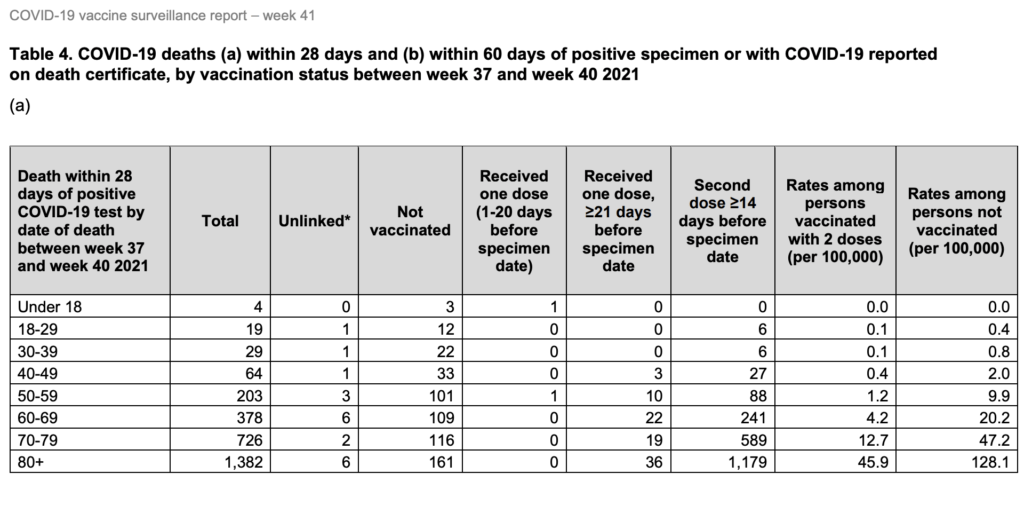 4. Pfizer soon will “offer” their shot to children 5 to 11 year olds. Offer. Cause that’s what they will do. Offer.

5. Dr. Zev Zelenko deals with the actual facts, as opposed to CBC, which pushes ever forward with whatever government policy that is current from one day to the next. Upload date on Zev interview is October 17, 2021

Thank you M., MissPiggy, Hellequin GB., PC., Yucki, Johnny U., EB. and all who contributed in the best way they know how to the greater good and liberty of humanity.

Anyone doubting this may want to think on how the US and the USSR and today Russia, both use jihadis as proxys for their political ambitions. The Taliban after all, was initially trained and equipped by the US to fight the Soviets.

11 Replies to “Berenson on Joe Rogan-UK data shows over 40 and vaxxed MUCH more likely to suffer great consequence from Covid: Links 1, October 19, 2021”