1. Kurt Westergaard dies of natural causes. A mighty triumph for a man in the top ten of the Muslim Most Wanted list

Please click through to RAIR Foundation’s examination linked above, of the events that turned a quiet gentle Danish cartoonist and made him into a most-wanted-dead for Muslims and a hero of free speech for the rest of the world. Having met him personally, and spent a few days with him in 2009, I can say that my impression was of a man who did not seek attention, nor did he wish to be a hero or villain of any kind. He was an artist and an admirer of the arts. But once the mantle was thrust on him, he rose to the challenge and never shrank from it, like for example, Salmon Rushdie did, who denounced his own work for safety’s sake and got neither praise nor safety for doing so. Kurt would have preferred to not be made a prisoner in his own home, or be attacked by multiple muslims when he was enjoying a visit from his granddaughter. But he never once said he would change anything he did.

An interview Kurt Westergaard did in Toronto in 2009:

(Mark these words: People who accurately point out how communists and islam creates enmity, hatred, incitement and persecution of select groups such as homosexuals, will be fined heavily and probably jailed. While the communists and muslims who actually write about or speak publicly on these matters, demanding gays and Jews be killed for just one example, will never be bothered beyond the absolute minimum when it cannot be avoided due to press leaks about thier activities. But Bill C-36 will also end those)

The controversial piece of legislation will “see more things through to charges,” said Corporal Anthony Statham of RCMP’s British Columbia Hate Crimes Team: “Law enforcement has to have the ability to use the law effectively.”

Bill C-36 An Act To Amend The Criminal Code threatens house arrest or $70,000 fines for any internet publisher, blogger or social media user suspected of posting hateful content without incitement of any crime. Cabinet introduced the bill June 23 just minutes before Parliament adjourned for a three-month recess.

Speaking in a webinar sponsored by the federally-funded Canadian Anti-Hate Network, Statham noted the current section 319 of the Criminal Code forbids “public incitement of hatred” by “communicating statements in any public place (that) incite hatred against any identifiable group.” The term “hatred” is not defined.

Statham outlined that Parliament did not “define what hatred is” when it outlawed hate speech in 1970.

(At 19 minutes there is a Google Whistleblower who in a few seconds exposes an evil of biblical proportions. The merger, he explains, of Marxist, “Critical Theory” with Artificial intelligence”.)

4. This is a bizarre and important story. A VP of Google is fired for past antisemitism. But the story is so convoluted, one cannot really tell if he was fired because he was antisemitic, or because he no longer is. Notice the massive lie of omission in this story. He was raised a religious Muslim. His hatred of Jews, CLEARLY all came from that. As his experience with Jewish people in a secular country informed his reason, he no longer harboured what he recognized was an irrational and religiously incepted hatred of Jews. So now he is fine with it all. And now he is fired. But the actual story omits ANY mention of Islam!

We all know that if he had been a Klansman and said the same things he would be celebrated and giving guest lectures and at the White House for dinner for his turnabout. But because he was Muslim, he has lost his career.

I no longer have a burning hatred for Jewish people, says Googler now suddenly no longer at Google

Google Cloud’s veep of developer relations abruptly left the web giant late last week after sharing a lengthy essay on how he no longer hated “all the Jewish people.”

One month ago, Egyptian-American Amr Awadallah, who joined Google in 2019, had posted on LinkedIn a 10,000-word missive, with an accompanying two-hour YouTube video, declaring: “I hated the Jewish people, all the Jewish people, and emphasis here is on the past tense.

“Yes, I was anti-Semitic, even though I am a Semite, as this term broadly refers to the peoples who speak Semitic languages, such as Arabic and Hebrew, among others.”

The piece continued by describing how antisemitism was ingrained in him as a child by those around him, and even by the time he arrived in America from Egypt in 1995, in his mid-twenties to study a PhD at Stanford, he “still held deep resentment towards the Jewish people.”

Awadallah, who described himself as “a proud Muslim with a touch of healthy agnosticism,” said he was “cautious” of his PhD research advisor Mendel Rosenblum, who later co-founded VMware with Diane Greene. She went on to be the boss of Google Cloud from 2015 to 2019. Both Rosenblum and Greene, now married, invested in Awadallah’s startup Cloudera, which made him a pretty penny by going private four years after going public. Awadallah described Rosenblum as his “first ‘Jewish angel,’ he solidified the elimination of prejudice from my heart.”

The post continued with Awadallah rattling off the Jewish people he came to admire, from John von Neumann and Albert Einstein to Adam Sandler, and how he realized he was wrong to harbor so much hate.

(IF they fired him for his admiration of Adam Sandler, I might understand)

5. Well given Pfizer’s safety record, we should probably all just take the shot 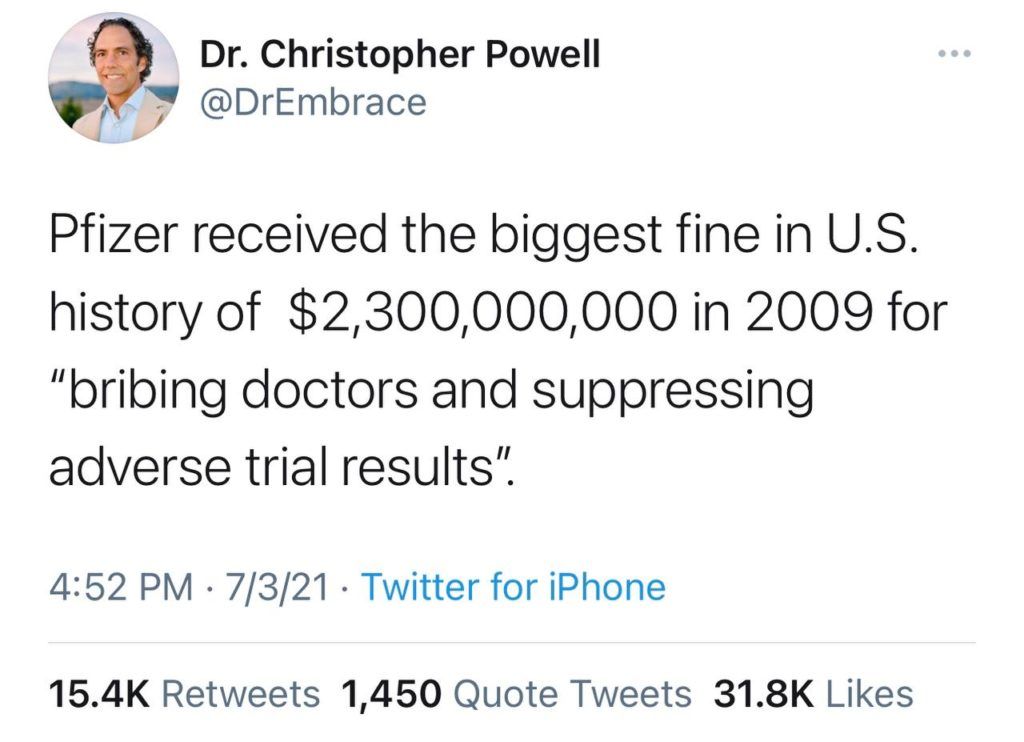 Thank you M., Johnny U., Pauline, Hellequin GB., Rich, Richard, PC., Marianne W., KAF., and MANY MANY more who are conduits of the real for us all.