1. Inventor of mRNA vaccines breaks ranks with the new politburo on how they must speak about the vaccines

2. If people are looking for another reason to buy things from somewhere other than Amazon, this may be for you.

Below, a screen grab of part of the email, America’s Front Line Doctors sent out to its subscribers: 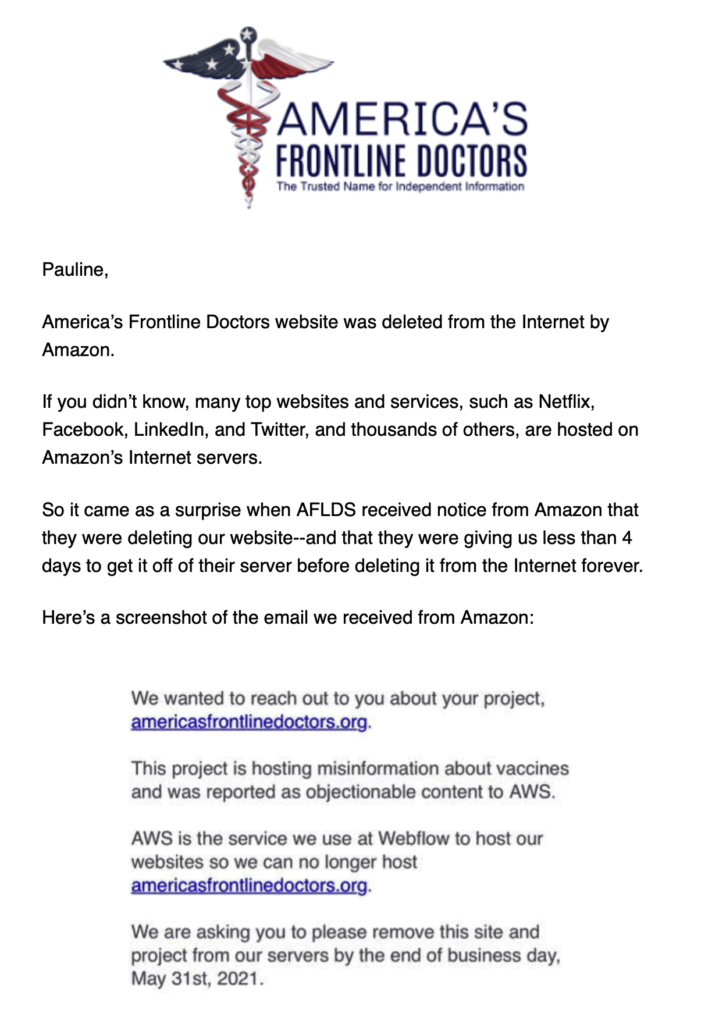 3. FOX: Rand Paul rips WHO after announcement of new “investigation”

(I have heard from someone who has TV, that FOX has been amazing all day. They are holding feet to the fire and raising issues no one else will touch yet.)

4. Wuhan Lab promotional video with English titles: Bats in the belfry, bats in the lab.

(As Stephen Coughlin explained in one of his videos about the Muslim Brotherhood and predicting the future, its important to watch and read enemy propaganda intended for us, also the propaganda they make for the home team. This is a great bit of home-team Chinese cheer leading which offers some pretty solid insight)

Portland‘s 50-person riot squad resigned in protest Wednesday in solidarity with one of their colleagues indicted for striking a photographer they claim was a rioter.

The resignations were effective immediately, according to the Portland Police Bureau, and come after the indictment on Tuesday of Officer Corey Budworth, for assault during an incident in which he allegedly struck photographer Teri Jacobs in the head during a riot last August.

‘Unfortunately, this decorated public servant has been caught in the crossfire of agenda-driven city leaders and a politicized criminal justice system,’ the Portland Police Association said in a statement Tuesday.

Video of the incident was shared on social media, in which Budworth appears to push the photographer, who has been identified as Jacobs, an activist, and then striking her in the head with his baton.

(Having seen a lot of video of the actual insurrection/violent revolution by communists in Portland, the only problem was using police with police rules when they should have used the army and army rules, like they did after January 6 in Washington, when they should not have used either, given that a police officer shot to death an unarmed trespasser.)

Thank you M., Johnny U., EB., Pauline, Richard, Kalloi and MANY more.

There is a great deal more material to do today. At this point it feels like humanity loves to indulge in an existential crisis except when there actually is one. Then they ignore it.