ET posted a notice from the College of Physicians and Surgeons of Ontario:

There have been isolated incidents of physicians using social media to spread blatant misinformation and undermine public health measures meant to protect all of us. In response, the College released the statement below. The statement is intended to focus on professional behaviour and is not intended to stifle a healthy public debate about how to best address aspects of the pandemic. Rather, our focus is on addressing those arguments that reject scientific evidence and seek to rouse emotions over reason. We continue to recognize the important roles physicians can play by advocating for change in a socially accountable manner.

The College is aware and concerned about the increase of misinformation circulating on social media and other platforms regarding physicians who are publicly contradicting public health orders and recommendations. Physicians hold a unique position of trust with the public and have a professional responsibility to not communicate anti-vaccine, anti-masking, anti-distancing and anti-lockdown statements and/or promoting unsupported, unproven treatments for COVID-19. Physicians must not make comments or provide advice that encourages the public to act contrary to public health orders and recommendations. Physicians who put the public at risk may face an investigation by the CPSO and disciplinary action, when warranted. When offering opinions, physicians must be guided by the law, regulatory standards, and the code of ethics and professional conduct. The information shared must not be misleading or deceptive and must be supported by available evidence and science.

Let’s have a look at this statement and see if we can figure out why so many in Ontario especially, but all over Canada and the West which implemented these measures are losing faith in government’s ability to manage health. To do this properly would mean an essay that would take several days. And it would be worth it, and should be done. But for the moment, a quick look at some of the things that the Ontario Health ministry does allow. One question still remaining is, does the term, “regulate” mean that it is covered under Ontario’s public health insurance? Either way the point is made. But its worse if they actually pay practitioners. 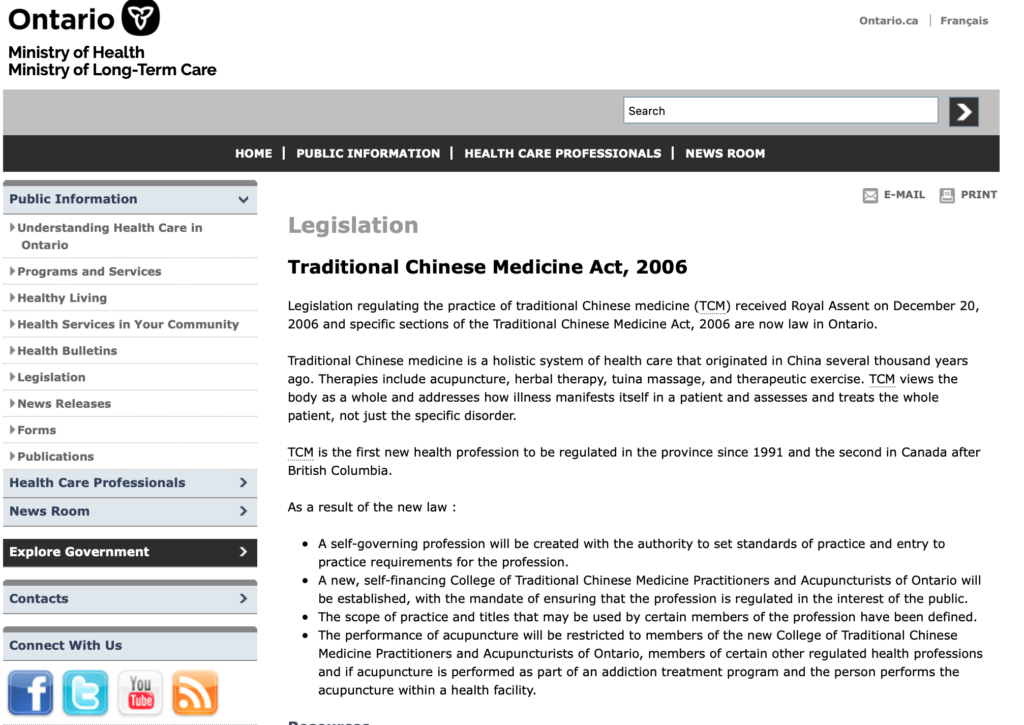 So while doctors are threatened with having their licence to practice medicine taken away if they prescribe safe, cheap and available medications to treat Covid19, medications such as Ivermectin, Hydroxychloroquine + Zinc, Colchicine, (proven by a Quebec hospital to dramatically lower the death rate from Covid), and now several more medications all of which have been quickly and commonly prescribed for a number of medical issues that are far far less threatening than Covid in some patients; and some of these medications have been peer reviewed and found to be effective, as we know from Dr. Peter McCullough, Chinese traditional medicine is a self regulating and available form of medicine in Ontario and perfectly legal.

Maybe with a little luck we can find some Chinese Tea with sprinkled Hydroxychloroquine or ivermectin in it like we found in the 90s except it was viagra. (Sorry, no link. Google doesn’t list it, but it was a news story in The Ottawa Citizen decades ago)

Meanwhile, ‘social’ media, (which I consider to be Judo-propaganda as it uses your own efforts and energy to defeat your point of view by making you spend the effort to write, research and create but limit dramatically who can see what you say) literally blocks and bans people for posting real medical and scientific information which contradicts a political narrative on Covid. That narrative is clearly based on zero treatment, lockdowns and at the beginning of these measures, a ‘vaccine’ which did not even exist at that point, but is based on a never-before-used technology on humans of gene therapy by injecting mRNA to make you own body manufacture the most dangerous part of the Covid19 virus, the spike protein. Examples are legion but here is an interesting one from this morning.

The INVENTOR of mRNA tech: 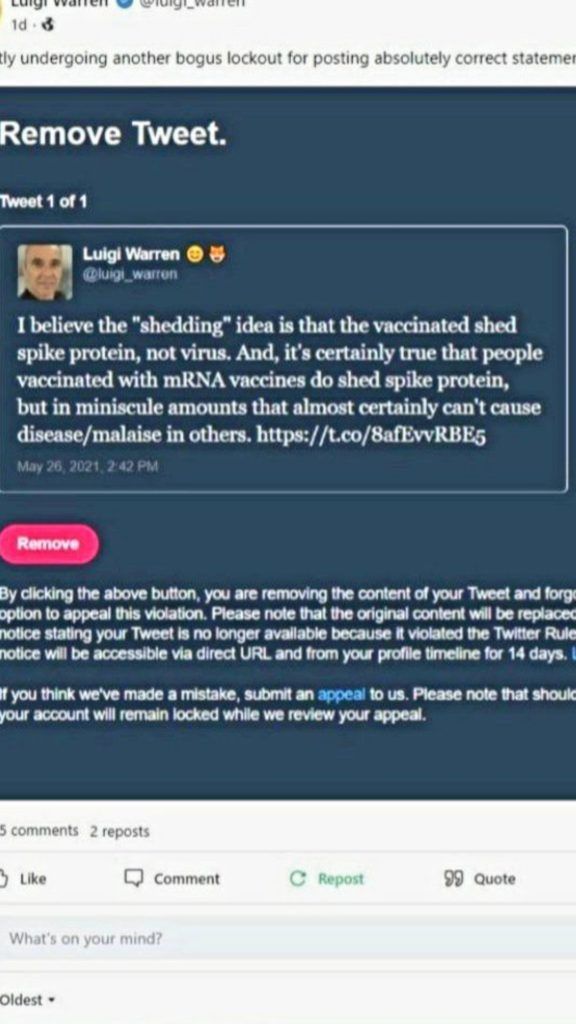 So Twitter suspended the inventor of mRNA tech for speaking a scientific fact about his own technology, even though he was not saying it was dangerous, but that what he did say could be seen as counter-narrative. This is nearly as bad as Twitter suspending the account of Dr. Zev Zelenko who invented the Zelenko protocol of Hydroxychloroquine, Zinc and Z-pac, and which saved thousands of lives and would have saved hundreds of thousands more if politicians in so many states and Canada had not made it illegal to prescribe HCQ ‘off licence’ (like it is every day for many illnesses) for Covid. An example from Texas below:

Frankly this could easily become a book, and again, should be a book. But the immediate purpose is to show that the Ontario medical system, and the doctors who obey its unscientific and highly political, not to mention hypocritical directives, deserve all the contempt and lack of trust they are now receiving, and a great deal more. They have taken an Orwellian stance on a matter of public health. What the party says must be the truth because the party says it is the truth. Any facts which contradict these truths must be suppressed and any speaker of these truths must lose their franchise as a practitioner, or even as someone with the right to express an opinion. Watch this video interview with a Canadian Doctor who explains that the Canadian version of the US VAERS is neither transparent not accurate and rejects any submissions by doctors who report adverse effects of the mRNA gene therapy injections.

In a Zoom interview with this same Doctor on Saturday night with VaccinechoiceCanada, he stated that his reveal of how the system actually works against public interests will cost him his medical licence, but the issue is too large to ignore. He is not the first doctor to say that. Which makes the statement by the College of Physicians that much more pernicious in nature.

There should be a much longer interview with this doctor from a Zoom call with Vaccine Choice Canada available online later today.

So in point form:

The official policy is to allow any kind of superstitious nonsense as medicine, unless it contradicts the directives of lockdowns and a new untested, unapproved except for emergency use, mRNA gene therapy.

It looks a lot like the people who determine what is an emergency are the same actors as determine the policies such as the experimental mRNA gene therapy, which has already killed 100X more people than the Swine Flu vaccine. The Swine flu vaccine was removed from the market for a mere 50 deaths in the USA. This according to the US VAERS which is said to under report adverse effects by a large large factor. But even going with their numbers, we can clearly see a massive problem.

Social media crushes any view no matter how true or beneficial it may be if it contradicts their narrative. The more fun and recent evidence of that, was how Twitter suspended anyone for saying the Covid19 virus was made in a Chinese lab, till this week, when suddenly that is OK now that the Democrat Party has allowed it.

It is very difficult to get real information about covid stats as the PCR test being used for it is insanely inaccurate and gives a 90% false positive rate.

The definition of a “case” was changed from a doctor looking at a sick person in front of him, who had a proper diagnosis done on him and a particular diagnosis had been arrived at. Then the doctor knew they had a “case” of something. But now it means that a test which is not a diagnostic test, found a fragment of a virus in a nasal cavity of a healthy person, and amplified it to the exponent of 40 or more, and determined that this healthy person now is a “case”. This inflation of case rate is the justification for the emergency powers all governments are using to justify the total elimination of all safety protocols in order to get everyone to take an untested and unapproved mRNA injection.

It is also even listed on the increasingly dubious CDC website, that injecting someone with these mRNA shots who previously had recovered from Covid19, will kill their existing T cell immunity, which all doctors agree is a far superior form of immunity than any vaccine can give.

And yet Ontario has granted fiat law allowing children from the age of 12 and up to get the injection without the knowledge or consent of their own parents, and then lured them to injection sites with ice cream.

The Flu has disappeared altogether this year, and the claim is that social distancing and mask wearing has ended the flu, but Influenza A and Influenza B are both Corona viruses so… No. It is more likely they are diagnosing flu cases as Covid19 to prop up numbers and justify the continued emergency act which is all that lets them force an untested vaccine on us, while simultaneously disallowing tested, safe treatments.

It also is interesting how the government-Bigpharma complex managed to get so many bright people onboard with its narrative in the following way, and as evidenced by the Global ‘News’ video above. The government creates an unnecessary state of emergency in which all your most basic rights and freedoms are removed from you. They then get special powers in that state of emergency,  giving them more power than ever before to skip regulatory agencies and proceedures so that they can create their own, normally illegal solutions to a problem they created. They then get the public to think that taking their solution is a path out of the emergency regulations, even though it has not been so far with masks, social distancing and lockdowns and pretty much full cancelation of the culture.

I believe that Karl Marx called this, “Thesis, counter-thesis, solution.” Invent the problem, force your solution for the invented problem, and hey presto you make whatever change you want in society via a dialectic scam.

There are countless provable aspects to this not included in this short article. But I welcome any augmenting facts, thoughts and ideas, as well as corrections and counter-narratives in the comments. No one can make an informed choice without real information.

And that clearly is the theme of the 21st century. “Make sure that no one has the information they need to make a choice other than the one we want them to have.”

I don’t know who the president of the United States is beyond knowing it is not that tottering senile old man they show us from time to time. And frankly I’m not even sure entirely about Canada. But the figurehead of both nations is surely Winston Smith, quietly burning all the articles from the past, and pasting in the newest edicts of the Party.