A professor at the renowned Johns Hopkins School of Medicine advised Americans recently to “ignore” guidance from the U.S. Centers for Disease Control and Prevention due to the public health agency’s puzzling refusal to recognize natural immunity from previous infection.

Dr. Marty Makary, who also serves as a professor at the Bloomberg School of Public Health, suggested during a Tuesday appearance on “The Vince Coglianese Show” that 150 million Americans, or “half the country,” likely already have natural immunity to COVID-19 due to having been infected with the virus and then recovering.

Yet despite that staggering figure, Makary lamented the fact that the CDC, in concert with Biden administration officials, have neglected to recognize the reality of the situation. Instead, previously infected individuals who decline being vaccinated are routinely “demonized” by health officials who insist that virtually all Americans must be vaccinated before normal life can resume.

But “herd immunity” has already been reached, argued Makary, citing up-to-date vaccination and infection data to suggest that 80% to 85% of Americans are currently protected from the virus.

Dr. Phillips has become a skeptic of the mRNA shots and especially of Lockdowns, which cause the exact conditions that make people susceptible to Covid 19

Alphabet/Google/Youtube seems to want to know who watches this counter-narrative material. So if people want to see this and not be tracked, let me know in the comments and perhaps it can be replatformed.

4. ATTENTION ANYONE WHO HAS AN AMAZON inhome spy device like Alexa:

Amazon Sidewalk, the company’s crowdsourced mesh network program, will be switched on across the US next week. But, if you own an Amazon device and don’t want to be part of it, you have just a few days left to opt out.

Amazon devices will automatically enroll in the program unless users explicitly visit their settings menu to withdraw. These include devices in the Alexa series, the Echo line, the Ring family, and other smart home equipment.

Sidewalk uses these devices as nodes that form the cornerstones of a crowdsourced Amazon mesh network. The service employs Bluetooth connections and other spectrum bands with network speed limited to 80kbps. A data cap of 500MB per month is also standard.

Amazon’s grand design for Sidewalk is simple. The free service allows the company to easily broaden the coverage and connectivity of smart home devices beyond a Wi-Fi network. “For example, if your Echo device loses its Wi-Fi connection, Sidewalk can simplify reconnecting to your router,” it explains. “For select Ring devices, you can continue to receive motion alerts from your Ring Security Cams, and customer support can still troubleshoot problems even if your devices lose their Wi-Fi connection.”

While Amazon does provide documentation (h/t Ars Technica) on how it uses the service, the encryption it employs, and user privacy, it’s likely many users aren’t too thrilled by the concept. Some might find it beneficial. Those who don’t want to take part do need to visit the Alexa app’s settings menu.

Cybersec friends of this site has described this program as “A hacker’s paradise”. To get directions on how to opt out, if indeed you can opt out, click here. Personally I would unplug it, let the battery run down, put it in a tin foil pouch and leave it in a closet till the sun burns out.

To 23 May 2021, 3.6 million doses of COVID-19 vaccines have been given in Australia. In this period, the TGA has received 210 reports of deaths following immunisation – 109 have been reported for the Pfizer vaccine, 94 for the AstraZeneca vaccine and seven where the vaccine was not specified. Most of these reports (93%) were for people 65 years of age and over, and over three quarters were 75 years of age and over. Many of the deaths relate to elderly aged-care residents.

(Since January I am told, there was 1 death from Covid in Australia. And 210 from the mRNA shots.)

Though the economy in Ontario will begin opening up once more in the coming weeks as we make our way out of the third wave of the pandemic, there is still a long road ahead as far as vaccinating the population, keeping variants of concern under control and assuring that COVID-19 case counts and hospitalizations stay low.

This is ostensibly why the provincial government is moving to extend its emergency powers, which enable it to make quick decisions and implement restrictions like business closures and gathering limits in less time and with less red tape.

But, this latest motion coming to Queen’s Park on Monday has some residents and local politicians concerned, as it is asking that these powers be extended all the way through December 1.

Thank you ML., M., PC., Johnny U., MissPiggy, Hellequin GB., HeHa, Gates of Vienna, KF., and MANY more as well as some new contributors to this site. Welcome one and all and thanks.

At last some non-Marxist propaganda has been appearing on the streets of this fine city recently.

Does this mean that people are finally caring enough to fight back in a small way? Or perhaps frightened enough to do so? 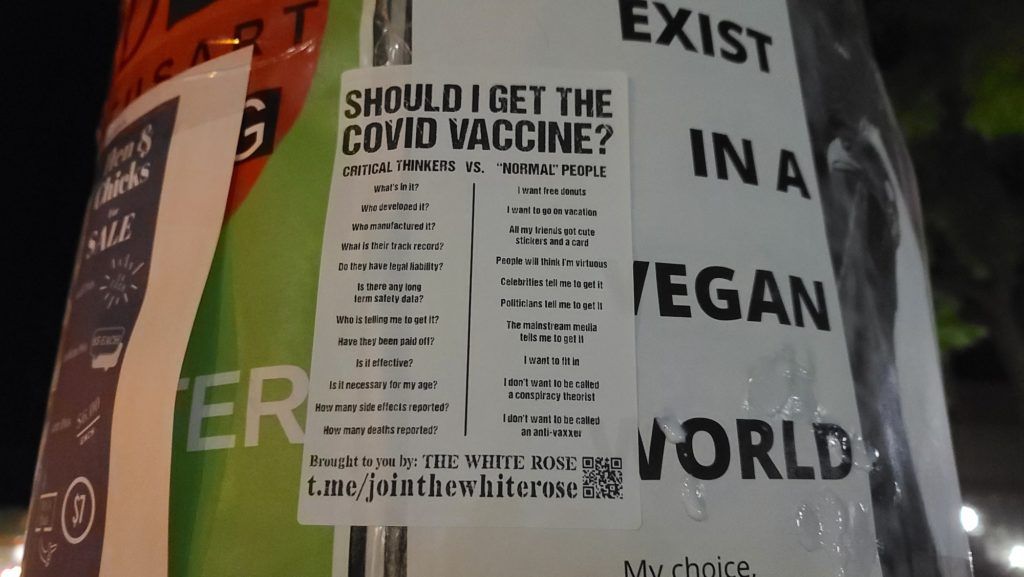 5 Replies to “Emergency measures till December, Got Alexa? Johns Hopkins says ignore the CDC, Scary news on the spike protein: Links 1, May 31, 2021”