1. Covid19 has affected ravens… or something.

When this happens, we should worry

3. At least some Republicans have a grip on 4th amendment and basic rights

4. Here is a stellar example of a Marxist dialectic scam. In this case, moral relativism as a weapon to delegitimize the Jewish people over an ancient scriptural legend. Not to mention that even if the legend was historical fact, the killing of the Egyptian sons was the last of 10 plagues God did, to free the Jews, who legend had it, the Egyptians had as slaves. So its a brilliant example of Marxist relativism, because anything someone did to end slavery normally would indeed be celebrated. Unless its Jews, and Jews who represent a Western tradition of thought and culture. 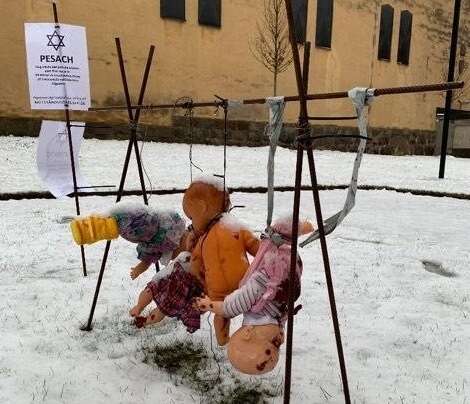 Police in Norrkoping, Sweden, are investigating after someone left a hate-filled message and a group of dolls hanging outside a synagogue there on the first day of Passover, March 28.

According to a post from the Anti-Defamation League, the note referred to Passover being a “Jewish celebration of killing thousands of Egyptian children.” The ADL also posted a photo of some of the hanging dolls with what appeared to be red paint or markers on them.

The ADL also noted that the neo-Nazi Nordic Resistance Movement posted the incident, including a photo taken at night that showed even more dolls hanging outside. In its tweet, the ADL said: “We urge the police to take quick action against such intimidation and harassment.”

A local news website reported that police would patrol the synagogue during the remainder of the holiday, which continues through Sunday night. Norrkoping is about 100 miles south of Stockholm, and according to the European Jewish Congress, has a small Jewish community.

Imagine what Israel could do if they used this kind of reasoning, to Saudi Arabia based on the Koranic tale of Mohammad committing genocide against the Jews of Banu Qurayza.

6. Brits will treat Covid like flu with lockdowns unlikely to be needed again, Chris Whitty says

(This seems like HUGE news? What is going on?)

BRITS will treat Covid like flu with lockdowns unlikely to be needed again, a top medic has said.

He added that the Government would only “pull the alarm cord” and reimpose lockdowns if a dangerous new variant of the virus arrived in the UK that Brits had no immunity to.

Professor Whitty told a Royal School of Medicine webinar: “Covid is not going to go away.

“You’ve got to work out what’s a rational policy to this and here I would differentiate quite a lot between a pandemic environment and what you get with seasonal flu.

“The last time we had that was three years ago and no one noticed it.

“So it is clear we are going to have to manage it, at some point, rather like we manage the flu.

“Here is a seasonal, very dangerous disease that kills thousands of people and society has chosen a particular way round it.”

Chief medical officer Professor Chris Whitty said that accepting some Covid deaths was a price worth paying to allow people to live a “whole life”.

Thank you EB., ET., Johnny U., Yucki, M., Richard and all who sent in thoughts, questions and links.

6 Replies to “Did the UK go back to individualism and drop Covid measures? Ravens are enjoying Covid changes: Links 2, April 1, 2021”