The House of Commons has passed the motion declaring China’s actions against the Uyghurs as a genocide.

2. Supreme Court Clarence Thomas appears to be the only judge left who seems to be concerned about the actual law as he dissents from the abdication of responsability of the Supreme Court over Pennsylvania’s unconstitutional election handling.

Supreme CourtJustice Clarence Thomas issued a dissenting opinion regarding the high court’s decision not to take up a case challenging the Pennsylvania Nov. 3 election results.

The court on Monday announced it won’t take up lawsuits challenging a Pennsylvania state court decision that relaxed ballot-integrity measures, including a move to extend the ballot-receipt deadline during the November election by three days due to the CCP (Chinese Communist Party) virus. Former President Donald Trump and Pennsylvania’s GOP urged the court to take up a review of the Pennsylvania Supreme Court ruling.

“This is not a prescription for confidence,” Thomas wrote on Monday, adding that “changing the rules in the middle of the game is bad enough.” Thomas, considered by many to be the most conservative justice, said the court should have granted a review.

VladTepesBlog covered the story in Gatineau that Tucker touched on around January 21, 2021 and our translated, titled video is below:

4. Brooklyn lawyers who were facing life behind bars for ‘throwing a Molotov cocktail into an NYPD car during a George Floyd protest’ are quietly offered a plea deal

Two Brooklyn lawyers who were facing life behind bars for allegedly throwing a Molotov cocktail into an empty NYPD car during a George Floyd protest have been quietly offered a plea deal.

On May 29, Urooj Rahman and Colinford Mattis were arrested after a protest in Fort Greene, Brooklyn. Cops say that Rahman crafted a Molotov cocktail out of a Bud Light bottle and threw it into an NYPD vehicle, then hopped into a getaway car being driven by Mattis.

It was caught on surveillance cameras and she was even photographed in their minivan holding the homemade bomb.

They were then hit with a seven-charge indictment which alleged use of explosives, arson, arson conspiracy and use of an explosive to commit a felony.

They both pleaded not guilty – not because they claim they didn’t do it, but because they don’t think the charges are called for.

They said all they did was destroy property and attend a protest and that they were being made an example of by the very police they were protesting against.

(What this site used to, and still refers to as selective enforcement is better understood to be a dialectic process of application or non application of law to achieve a specific outcome, always moving to the left. This would be the same as calling CNN or CBC “fake news” when in reality it is enemy propaganda.)

(Once again we see with the use of terms like “Essential” that the Covid virus can tell the difference between Kulak travel, [Any reason you might need to go somewhere for work or pleasure or personal reasons], and Politburo reasons, which the article refers to as “essential travel”. Clearly they are exempt because this killer virus clearly won’t infect them and make them a threat to the rest of us in the same way it will to a person who went somewhere to visit a dying relative.) 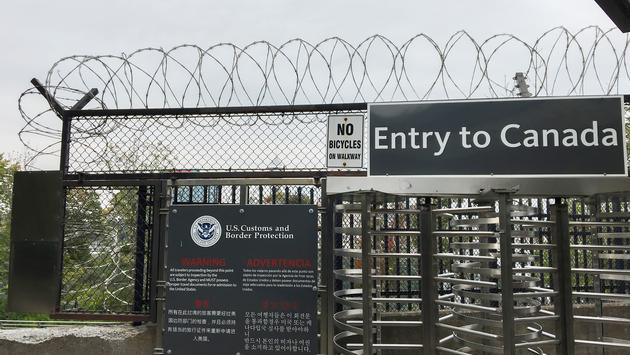 Strict new rules for anyone travelling to Canada came into effect today.

As of February 22, anyone flying into Canada will be subject to a PCR-style test for COVID-19 after they land. Travellers also are required to have arranged a three-night stay at a designated quarantine hotel near the Vancouver, Toronto, Montreal or Calgary airport. (Test results taken within 72 hours of a scheduled flight also must be presented at the airport someone is flying to Canada from.)

Fliers who take their Canadian airport tests and are negative for the virus can finish out their mandatory, 14-day quarantine at home or at a designated quarantine site and will be subject to increased surveillance. […]

Ottawa last Monday started requiring all non-essential travellers crossing into Canada by land to show a negative COVID-19 test taken within 72 hours. Starting today (Feb. 22), non-essential travellers granted exemptions and allowed into the country at land crossings also be required to take a COVID-19 test at the border as well as at the end of their 14-day quarantine. That rule will apply initially only to border crossings that have the proper equipment, and will then be expanded.

(We should add of course that illegals who walk into Canada at Roxham Rd. Quebec or anywhere else like that are not subject to any of this or any of the expenses detailed at the article linked above, and we still cannot determine if daily flights are coming in to Canada from China with none of this being applied to the passengers. Which means in all likelihood that is the case)

Thank you Rich, Richard, M., ML., Wrath of Khan, MarcusZ1967, Johnny U., ET., Tama, Sassy and ALL who are managing to keep watching despite the potential PTSD the deep sense of looming cynicism may cause.

Its good to know the FBI has its priorities straight

7 Replies to “Tucker Carlson deals with the Gatineau Quebec Stasi raid and MUCH more of import: Links 1, February 23, 2021”