(This post is everything other than US Electoral-coup related. For that material please see the 5 Electoral fraud posts which are being updated as the day goes on, as well as fraud post 6 is due probably this evening)

1. Canadian tax dollars at work. CBC article on “how capitalism is destroying democracy”

(We have said repeatedly that CBC is not fake news, its enemy propaganda. This makes the case for us)

Is capitalism destroying democracy and fostering the rise of authoritarian regimes around the globe?

With the election of right-wing populist governments and leaders in Hungary, Poland, the United Kingdom, Brazil, Turkey, India, Italy and the United States, the prospect that the answer is “yes” is gaining credence.

“And authoritarian capitalism is where the United States is heading… I think it is much more closely connected to a certain kind of capitalism — a capitalism which says: it’s okay for there to be radical inequality.” 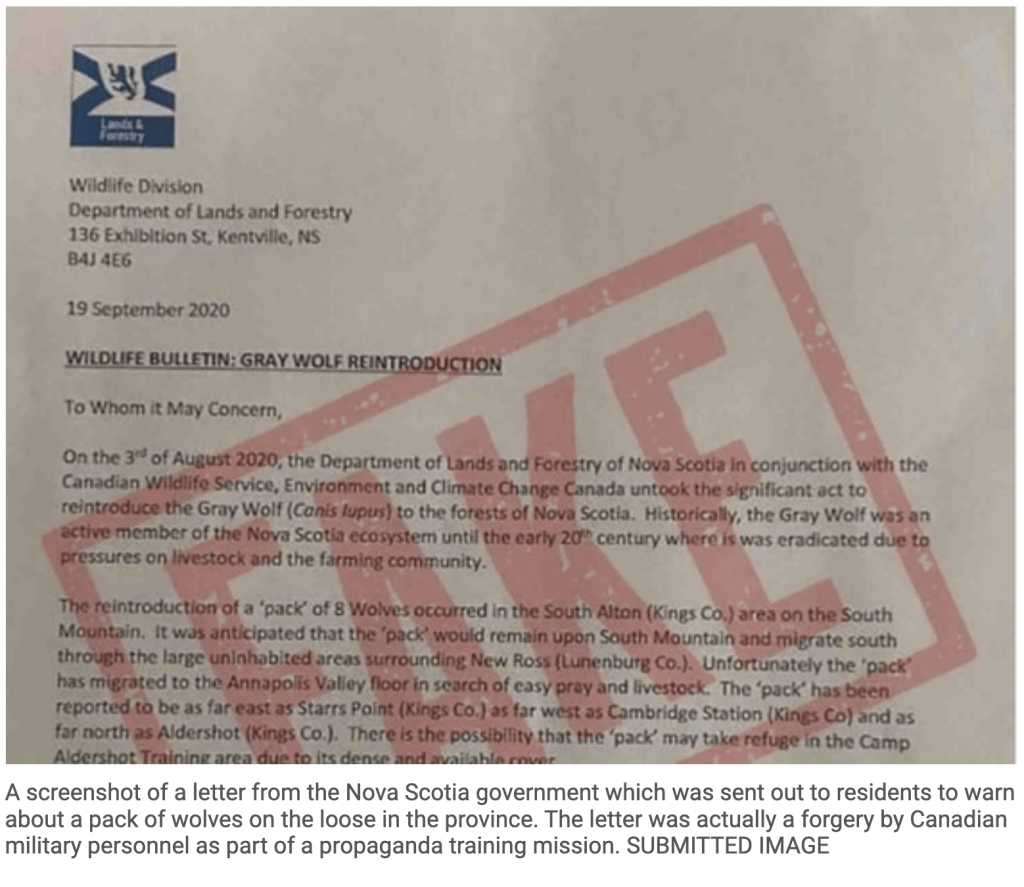 A letter from the Nova Scotia government sent out to residents to warn about a pack of wolves on the loose in the province was forged by Canadian military personnel as part of a propaganda training mission that went off the rails.

The letter told residents to be wary of wolves that had been reintroduced into the area by the provincial and federal governments and warned the animals were now roaming the Annapolis Valley. The letter, which later became public, sparked concern and questions among residents but was later branded as “fake” by the Nova Scotia government which didn’t know the military was behind the deception.
The training also involved using a loudspeaker to generate wolf sounds, the Canadian Forces confirmed to this newspaper.

The fake letter was part of new skills being tested by the military as it hones its expertise for launching propaganda missions at home and abroad. The letter was developed by information warfare specialists with the Halifax Rifles, a reserve unit.

(I do not wish to make light of the serious issue of the Canadian Military being used to gaslight Canadians more than we are already being gaslit by our own government and media, but this story sounds an awful lot like an episode of Father Ted)

3. Austrian Chancellor Kurz: EU Must Fight Back Against Political Islam

Following the terrorist attack that left four dead in Vienna, Austrian Chancellor Sebastian Kurz has vowed to fight “political Islam” and demanded the European Union focus on the issue.

Chancellor Kurz said that much of his country was shocked in the aftermath of Monday’s terrorist attack, saying: “Many people in our country believe that Austria is an island of the blessed. Most Austrians only know of terror and violence from the news of distant countries, but not from our own country.”

The Austrian leader, who spoke to German newspaper Die Welt, went on add that he saw both Islamic terrorism and the ideology of political Islam as a problem for Europe.

“Now, it is important that we resolutely continue the fight. Not only against Islamist terrorism but also against the ideological basis behind it — that is, against political Islam and radical Islamism,” he said.

I wonder how this influence occurs which leads Trudeau to supporting Islamists? pic.twitter.com/eQcA3E7bQz

The dismembered bodies of at least five adults and 15 boys were found on Monday, scattered across a forest clearing in Muidumbe district.

Suspected militants beheaded over a dozen men and teenagers participating in a male initiation ceremony in northern Mozambique, local sources said Wednesday, in the latest violent incident in the country’s insurgency-hit northeast.

The dismembered bodies of at least five adults and 15 boys were found on Monday, scattered across a forest clearing in Muidumbe district.

Islamist militants operating in the area had attacked several nearby villages over the weekend, looting and burning down homes before retreating into the surrounding thicket.

“Police learned of the massacre committed by the insurgents through reports of people who found corpses in the woods,” said an officer in the neighboring Mueda district who asked not to be named.

Thank you Wrath of Khan, M., EB., ET., Richard, Yucki, Johnny U., KF., and all who contributed and for that matter, all who manage to stay engaged at this point.