LOL. Biden got a 138,339 tranche of votes in Michigan without a single vote for Trump, in case you were wondering what is happening.

Trump Legal Adviser Jenna Ellis Discusses Magical 138,000 Michigan Biden Votes that Appeared Out of Nowhere in the Middle of the Night (VIDEO)

This is why President Trump called for a halt to voting

Glenn Greenwald: The U.S. Inability To Count Votes is a National Disgrace. And Dangerous.

The richest and most powerful country on earth — whether due to ineptitude, choice or some combination of both — has no ability to perform the simple task of counting votes in a minimally efficient or confidence-inspiring manner. As a result, the credibility of the voting process is severely impaired, and any residual authority the U.S. claims to “spread” democracy to lucky recipients of its benevolence around the world is close to obliterated.

At 7:30 a.m. ET on Wednesday, the day after the 2020 presidential elections, the results of the presidential race, as well as control of the Senate, are very much in doubt and in chaos. Watched by rest of the world — deeply affected by who rules the still-imperialist superpower — the U.S. struggles and stumbles and staggers to engage in a simple task mastered by countless other less powerful and poorer countries: counting votes. Some states are not expected to finished their vote-counting until the end of this week or beyond.

Why are we surprised by their brazen corruption? Name one consequence they've suffered for all that's been exposed?

FLASHBACK: Error and Fraud at Issue as Absentee Voting Rises</b> “The more people you force to vote by mail,” Mr. Sancho said, “the more invalid ballots you will generate.”

The following Tweet by President Trump is not able to be shared on Twitter in any way. Here is a screen grab. 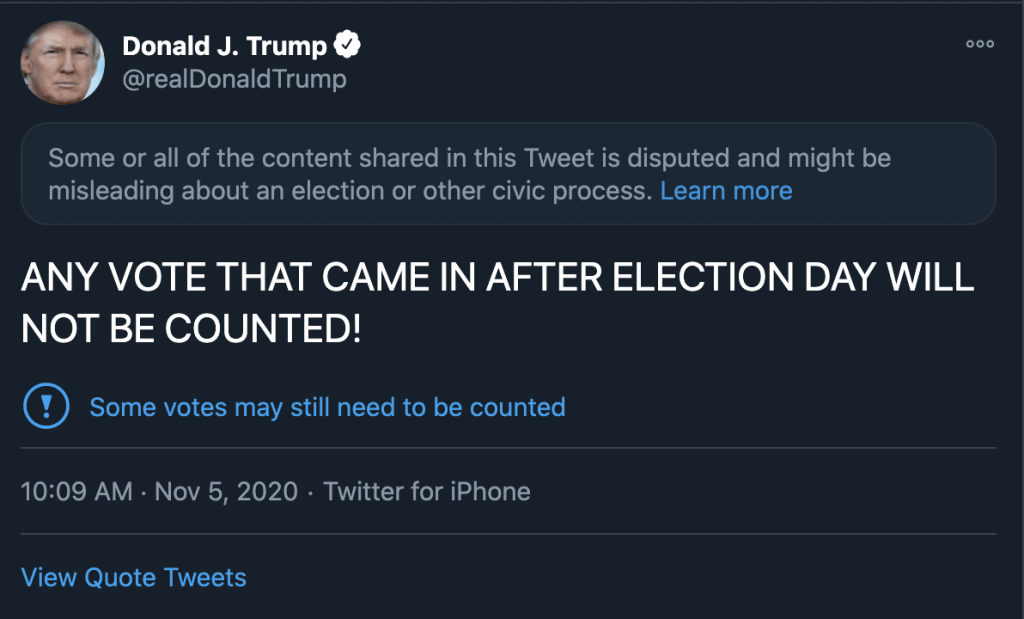 The fact that we have a political party dead-set against voter ID is such an obv tell as to their intentions. https://t.co/iIOgtwbdMd

Why does it seem like the only time Trump ballots are "found" they're found in the trash or dumped on the side of the road?

Former Florida Attorney General @PamBondi: “We plan on entering that building right now and legally observing the voting process. If there is one illegal vote that is cast, it takes away from the great men and women of Pennsylvania who came out to vote legally.” pic.twitter.com/ZSaveXvWHp

Four months ago, he could see it. https://t.co/UYxq9M4baI

FACT CHECK: Hundreds of Pro-Trump Ballots Have Been Recovered in Rural Michigan City

UPDATE: Clerk has told county Republican officials that the ballots were simply misplaced and accidentally not included in the results. This indicates either complete incompetence and negligent behavior or extreme voter fraud

TENS OF THOUSANDS OF BALLOTS Dropped Off in USPS Boxes at Detroit Absentee Ballot Processing Center at 3:30 AM After Election

One day after the election, the results are still pending and will likely depend on the rust belt. President Donald Trump holds a strong lead in the state of Michigan, but the city of Detroit and their mail-in and absentee ballots have yet to be officially tallied.

In news that will likely cast further doubt on the election results, tens of thousands of absentee ballots arrived in large U.S. Postal Service boxes at the TCF Center in Detroit, Mich. on Wednesday morning at 3:30 am. The TCF Center, formerly Cobo Hall, is where the absentee ballots are counted for Wayne County, which is the home of Detroit.

Former Michigan state senator Patrick Colbeck wrote that the total number of ballots dumped on the counting board totaled 38,000:

Here’s the moment @msnbc cut out of the president at the podium.