1. Quebec appears to have gone into a massive Covid lock down and even has a repeat of the Toilet paper shortage. (For you entrepreneurs, this might be a good time to sneak into Quebec after a visit to a grocers with a trunk full.)

A sample of the measures: 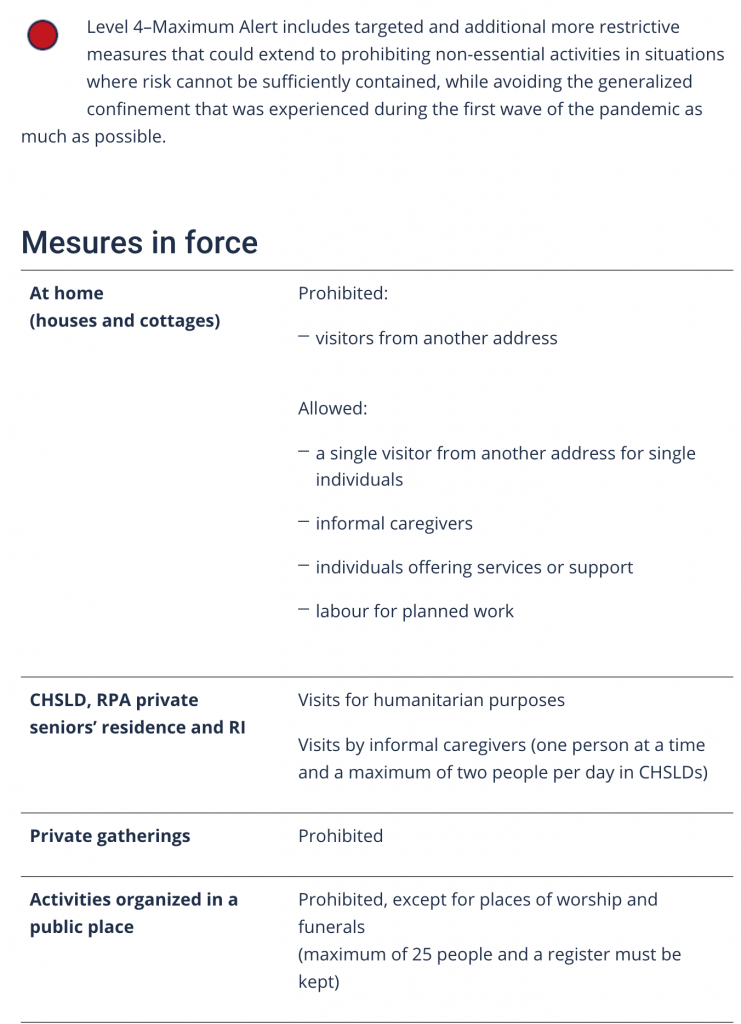 (One cannot help but wonder if this is more a reaction to the mass protests against government measures than against growing “case” numbers in Quebec.)

2. PICTURED: Democratic Senator Dianne Feinstein, 87, is seen walking through a private airport without a mask – just three months after she demanded a nationwide face cover mandate

Senator Dianne Feinstein has been branded a ‘hypocrite’ after being pictured walking inside a Washington DC airport terminal without a face covering on – just months after she called for a national mask mandate for all airlines and airports.

The maskless California Democrat was caught on camera traversing her way through a private terminal at Dulles International Airport on Friday, with the images first aired by Fox News’ Tucker Carlson on Monday night.

Feinstein, 87, previously penned a letter to the Federal Aviation Administration and Federal Transit Administration on June 30 to institute mandatory mask mandates throughout airports, on airplanes, and on public transit across the country.

3. Armenia reports first death on its soil after Azeri shelling

YEREVAN (Reuters) – A civilian was killed on Tuesday in the Armenian town of Vardenis after it was shelled by Azeri artillery and targeted in a drone attack, Armenia’s foreign ministry said, the first casualty on Armenian soil since fighting broke out in Nagorno-Karabakh.

Armenia and Azerbaijan accused each other on Tuesday of firing into each other’s territory, far from the conflict zone in the breakaway Azeri region backed by Yerevan, as the worst spate of fighting since the 1990s raged for a third day.

(Brad has been saying this for some time now. The real news is yesterday’s post that Pakistani fighters are with the Azerbaijanis)

ISTANBUL (Reuters) – Turkey is sending Syrian rebel fighters to support Azerbaijan in its escalating conflict with neighbouring Armenia, two Syrian rebels have said, as Ankara pledges to step up backing for its majority-Muslim ally. The clashes over the territory of Nagorno-Karabakh are the heaviest since 2016, with reports of dozens of deaths and hundreds wounded.

Hey @realdonaldtrump – can you believe this? We caught @jack from @Twitter removing retweets from our video. pic.twitter.com/SiPxSpHkF6

6. In case we thought it was just Minnesota

The New York City Board of Elections is blaming a vendor for an egregious error on absentee ballots mailed to voters in Brooklyn that could cause their votes to be thrown out–even if they follow the rules to the letter. The reason is that the absentee ballots were sent out with return envelopes that were mismatched and bear the names and addresses of other voters so that if the person signs the envelope with their own name it won’t be counted as the signature would not match the name on the mistakenly sent return envelope.

“This is totally illegal. Hope that the U.S. Attorney in Minnesota has this, and other of her many misdeeds, under serious review??? If not, why not???,” the president tweeted early Monday.

“We will win Minnesota because of her, and law enforcement.”

The president was referring to a report from Project Veritas that implicates progressive “Squad” member Omar in an alleged cash-for-ballots scheme to gather absentee ballots illegally from Somali immigrants.

This is totally illegal. Hope that the U.S. Attorney in Minnesota has this, and other of her many misdeeds, under serious review??? If not, why not??? We will win Minnesota because of her, and law enforcement. Saved Minneapolis & Iron O Range! https://t.co/yete31P680

10. Harvard medical school Prof on Lockdowns and how it affects Covid deaths

Thank you EB., Johnny U., Sassy, ML., M., Wrath of Khan, C., X., Hellequin GB., and many more not listed but not forgotten or unappreciated.