2. I don’t normally like amplifying enemy propaganda, but when its actually funny…

Lebanese Researcher Jihad Saad: Police in the U.S. Are Carrying Out a Policy of Killing Black People So Whites Can Have More Face Masks, Which Are in Short Supply pic.twitter.com/wyjJCMtiva

3. Seattle closed a park where Christians planned a prayer meet. It is a very large park and it could have been done safely. But Christians, undeterred, hit the streets and had their event anyway. ANTIFA, who have had run of Seattle streets for months, attempted to end it with no success.

4. Gotta say. This is pretty awesome. And now we know what the Village People are all upset about. Which tells us something about them.

5. This one may surprise some of you.

We posted a story about a pharmaceutical company who’s stock price fell when a vaccine trial produced a bad side effect. The company is AstraZeneca.

Their stock price has rebounded fully and here is why:

This company has made something like 800 variants of the Flu vaccine with no serious side effects showing up later. They also have two other less developed variants of the Covid vaccine still on the go, and the one which had a bad side effect was immediately pulled. This company actually has a great track record for safety and transparency. Should this company actually get one to market, those considering taking a vaccine would be advised to use theirs. As opposed to say, the Chinese Military one Canada was considering.

It is quite a relief to be able to post something which is positive these days. Lets hope this is the vaccine that President Trump has been talking about. If so, it makes sense why he would promote it. 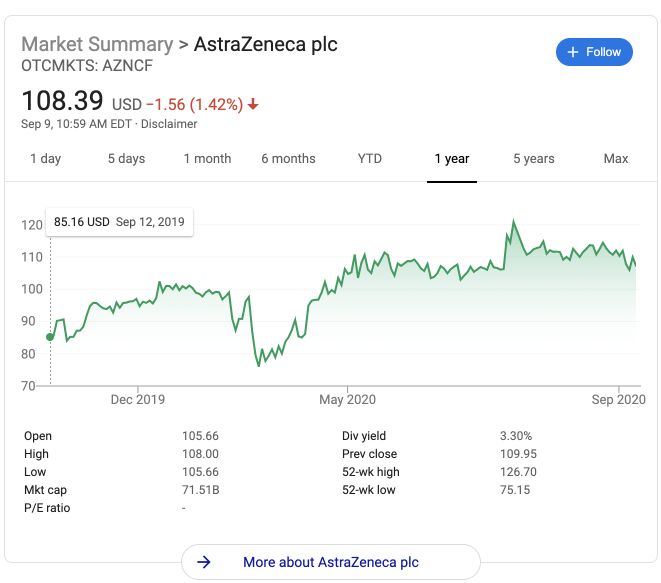 Thank you M., Richard, Wrath of Khan, Chris Jones, Johnny U., and all who are participating in our mutual emancipation