1. President Trump touches on the appeals court dropping the death sentence for one of the Boston Marathon killers. (At some point, if in a death penalty case, victim impact statements are to be allowed in a court then there should be nothing wrong with having that trial in the city where the crime was committed.)

2. Houston area doctor doubles down on HCQ (Nigerian Dr. interview in case this disappears and needs to be restored)

(Question: If an immigrant was in a US hospital, asked to have an imam come in and perform an exorcism of Djinn to cure the virus, they would pretty much have to allow it. If a naturopath demanded some water that a certain flower petal or pill had soaked in for the homeopathic remedy, they would allow that. In fact people in the US have a wide variety of rights to their own bodies and risk assessments. So the prohibition against HCQ is especially sinister. Remembering of course that Fauci specifically stated it was effective against the Corona virus in 2005.)

3. Texas Sate Senator does ANOTHER live conference on Hydroxychloroquine use. Watch it while you can. If it disappears, we will endeavour to restore it.

4. A refreshing tweet from pat Condel. It’s been a while since I saw naked reality like this.

Ha ha. Here comes the mob. The replies to this are a blizzard of faux outrage.
Two points.
1. I don’t give a toss if I get banned from Twitter. You can find me on Gab or Parler.
2. Pakistan is world leader in first cousin marriage. Yay, number one. High sixes all round. https://t.co/4qQYOh7qWf

5. Over the last few years, many videos have been posted here and in the Reader’s Links of naked people wandering around in the roads, often in Germany, blocking traffic and usually African males. One person seems to have found a solution.

7. To what degree is the New York Times, enemy propaganda? There was a MASSIVE protest in Germany by people who are sick of having their clear constitutional rights violated by government using the Wuhan Flu virus as the excuse for it. We have published numerous videos at Vlad dating back months on these protests by normal working Germans and law students and lawyers even. This weekend saw the largest protests ever and some of those videos are in Reader’s Links for today and Yesterday. But how does the NYT describe them? Yep. as NEO-NAZI

This was the scene in Berlin, where an estimated 17,000 people defied social-distancing and mask requirements to join a protest supported by neo-Nazi groups, conspiracy theorists and others who said they were fed up with the restrictions.

This seems like a good time to repost the Goebbels quote:

8. A plan to silence doctors who defy the narrative?

9. Covid is part of a communist revolution.

If you are a D.C. resident and attend a funeral for your grandparent, you are required to quarantine for 14 days.

Elites who go to John Lewis’ funeral? Of course the rules don’t apply to them. https://t.co/Y5v9j3ux13

10. Illegal militias parade around in the UK with no legal opposition for some reason.

Street theatre, #Brixton style. Paramilitary organisations have no place in the UK. Will the local Labour @helenhayes_ move to disavow? pic.twitter.com/tNImmJ7Xku

11. Another Black man stabbed for leaving the Democrat plantation in Portland. This time a journalist. 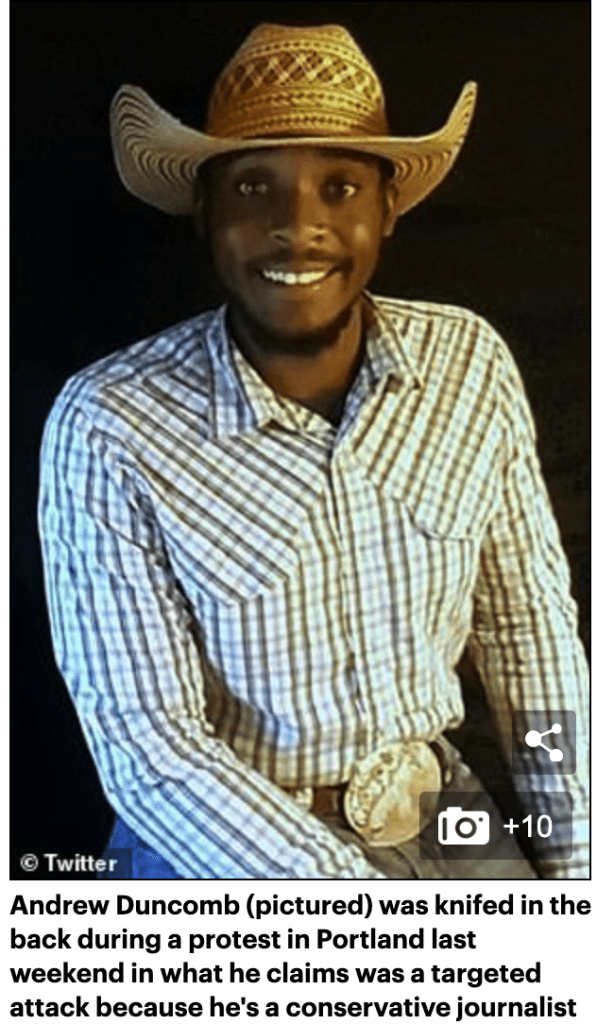 12. The land with no face masks: Holland’s top scientists say there’s no solid evidence coverings work and warn they could even damage the fight against Covid-19

As I walked around the sun-dappled streets of Amsterdam, something felt strange in this world swept by fear and pandemic. There was laughter coming from barges sliding along the famous canals, clusters of cyclists clogged the streets, shoppers dipped into chic boutiques, the barber shops seemed busy and cafes served couples chatting over coffee. […]

The nation’s top scientists, having examined key data and research, have declared there is no firm evidence to back the use of face coverings. Indeed, they argue that wearing the wretched things may actually hamper the fight against disease.

‘Face masks in public places are not necessary, based on all the current evidence,’ said Coen Berends, spokesman for the National Institute for Public Health and the Environment. ‘There is no benefit and there may even be negative impact.’

This is a bold but highly controversial stance – especially as fears grow of a second wave sweeping through Europe. Last week, Downing Street joined the global stampede to enforce face masks in public spaces such as shops, supermarkets and stations, following Scotland, Spain and France, along with Holland’s neighbouring nations of Belgium and Germany.

Thank you Johnny U., M., Wrath of Khan, EB., ET., Richard, and MANY more who sent in materials this weekend.