1. Police ‘have lost control of the streets’: Cressida Dick is accused of turning Met into ‘laughing stock’ and abandoning ‘law abiding residents’ to ‘mob rule’ after overpowered officers fled rioters screaming ‘run them out!’ as ‘up to 30 PCs’ were injured

The Daily Mail has managed to put entire articles in headlines these days!)

Police Commissioner Cressida Dick has been accused of turning the Met into a ‘laughing stock’ and abandoning ‘law abiding residents’ to ‘mob rule’ after a video showed them overpowering police and screaming ‘run them out’ as 22 officers are injured – including two needing a full body scan. ‘

In shocking scenes, social media footage showed hundreds of people gathered at the south London street party as fighting between revellers broke out before they turned their anger onto the police who had been called to the disturbance at the ‘unlicensed music event’.

Tory MP Andrew Bridgen told MailOnline: ‘Cressida Dick has lost control of the streets to a lawless minority. She has lost the confidence of the law abiding majority of residents in Brixton and the country and by effectively abandoning them to mob rule’.

Suggesting Home Secretary Priti Patel should remind Ms Dick and any other police chiefs of their responsibilities, Mr Bridgen added: ‘The duty of a chief constable is to uphold the law. Any who are not willing to do that should go immediately’.

(At this point the fury of what appears to be hypocrisy on the surface, actually is resolving into the relief of it being in reality just honesty. The reason we thought it was hypocrisy is because we imagined there was one law for all of us. So it was infuriating. But now we know it is all about the Habermas/Marcuse strategy of how a minority can dominate a majority and so now when we see this we can feel relief instead of anger because it is increasingly easy to show others what the real policy is, and how it is being implemented.) 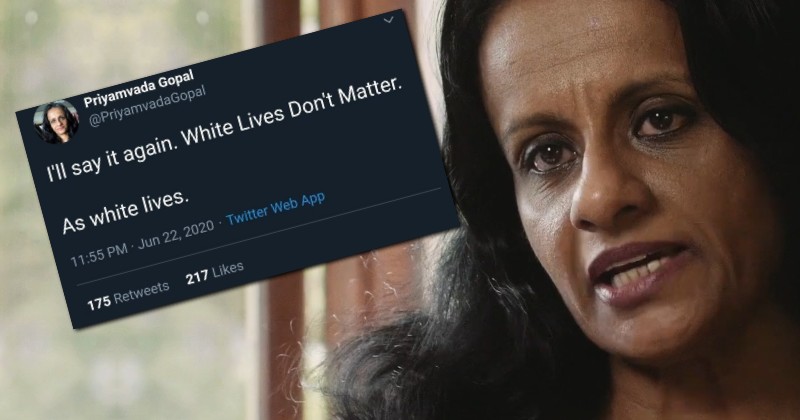 Cambridge University has defended one its academics after she tweeted “white lives don’t matter,” despite the institution previously dismissing another academic who made far less controversial statements.

“The University defends the right of its academics to express their own lawful opinions which others might find controversial and deplores in the strongest terms abuse and personal attacks. These attacks are totally unacceptable and must cease,” said the statement.

Media reporting on the incident has centered around alleged “abuse” Gopal has received off the back of a petition being launched to get her fired.

Apparently, the backlash to Gopal’s remark is more contentious than the racist nature of the remark itself.

3. The London school that tried to end racism: Year 7 pupils are divided into mixed race ‘affinity groups’ for a TV experiment – but white pupils ‘are terrified they could ruin their lives by saying the wrong thing’

White children were left in tears and admitted they felt ‘guilty’ and terrified of saying something racist ‘that could follow them for life’ in a new TV experiment that split pupils along racial lines.

Pupils in Year 7 at Glenthorne High School in South London were separated into ‘affinity groups’ of white and non-white students to discuss race and ethnicity during a three-week experiment in Channel 4’s new documentary The School That Tried to End Racism, airing tomorrow at 9pm.

The segregated affinity groups took place once a week, while 24 pupils aged 11 and 12 had further workshops and lessons together on white privilege and racial inequality throughout the programme.

Experiments included showing pictures of black children to see seeing how quickly students could associate negative words with them, versus positive words with white children; discussing ‘what it means to be white’, and doing a ‘privilege walk’, where they stepped forward or back in response to questions about their lives.

4. Just another article on another professor who is being deplatformed and apologized for speaking his truth.

[…] None of the people with COVID-19 infections were hospitalized and none died. A total of 289 people were interviewed as part of the investigation.

Contact tracers warned asymptomatic travelers and other people who came into contact with the students to self-quarantine. They also offered them a coronavirus test.

(If this was real news the headline would have been that lots of people got it, none of them got seriously sick.)

8. The state of rule of law and democracy in Toronto

9. Communist leader of the UN makes demands and threats on Israel over Judea and Samaria. Does anyone know what the UN said when China annexed Tibet?

The "Recovery" Trial, an investigation into #hydroxychloroquine's effectiveness, is funded in part by the Gates Foundation, the "biggest funder of vaccines in the world." Conflict of interest much? Getting big money out of scientific research can save lives.#crowdprotocol pic.twitter.com/ZfMcTD2zDJ

You may have heard that the FDA banned use of #hydroxychloroquine for COVID19. Here what the FDA actually did. pic.twitter.com/TpS6uKZ3No

Thank you M., Wrath of Khan, MissPiggy, ML., Don Laird, Richard and all who sent in materials and comments this week.

For those of you wondering what happened to Don Laird, he sent in this video which I slightly edited for safety. But I have to say in Budweiser’s defence, Light beer is kinda gay.