1. Global Warming is passe. Here is the newest climate conspiracy theory, brought to you by a Democrat Washington DC. councilman.

This model however has a lot of solid science behind it and is the real likely future. In fact should the sun spot/solar cycle continue to worsen, its possible Europeans will be crowding the beaches of Africa to survive the coming ice age. The good news is, they will likely be empty by then.

For a really good and comprehensible understanding of sun spots and climate, watch the documentary, The Cloud Mystery, which may be here on the Global Warming page at Vlad.

(Yet another example of how antisemitism and related values are the property of the left. As one German leader once said: “How can you be a socialist and not be an antisemite?” -Adolf Hitler. Quoted from The Lost Literature of Socialism.)

The Women’s March — a civil-rights group at the center of protests against the Trump presidency — is losing top staffers and supporters over its leadership’s refusal to denounce a racist, homophobic and anti-Semitic rant by Nation of Islam leader Louis Farrakhan.

The latest to jump ship is high-profile staffer Alyssa Klein, who quit last week as the group’s social-media director.

Klein called Farrakhan “a dangerous troll,” and tweeted on March 5 that Women’s March leaders are “turning a blind eye to the hate spoken about a group of people.”

Regional branches in Canada, Florida and Washington, DC, have condemned the leadership’s unwillingness to speak out against Farrakhan.

In 1988, an FBI source inside the Muslim Brotherhood revealed that the Islamist group’s proxies in America had a six-phase plan to “institute the Islamic Revolution in the United States.” [1]  Among these front groups was The International Institute of Islamic Thought (IIIT), a think tank committed to the “Islamization of knowledge.”

[2] This ideology, as Professor Vali Nasr writes, entails the subordination of scientific inquiry to “the mere implementation of the assorted teachings of the Shari?a.”[3]

Over the last three decades, IIIT’s part in the Brotherhood’s plan has met remarkable success.

The institute has made itself an indispensable resource for Islamic studies scholars: It has provided funding for over 70 active researchers based at institutions across America (see appendix); it has spent millions of dollars on endowing chairs in Islamic studies;[4] and it has publicized the research of hundreds of like-minded academics at its Summer Institute for Scholars.[5]

IIIT’s activities are integral to the Brotherhood’s broader strategy of inciting an international Islamic revolution. As an official IIIT handbook notes:

4. A proper analysis of the zeitgeist at the FBI

5. CBC article invents justifications for subverting the electoral process in favour of the left-ideologues for all time.

Hundreds of schools across England received an electronic bomb threat on Monday, causing some to evacuate.

The electronic threat claimed a bomb was placed on school grounds and would be detonated if demands were not met.

The emails are thought to have come from the United States and have been sent across the UK, primarily to London, Northumberland and Humberside. 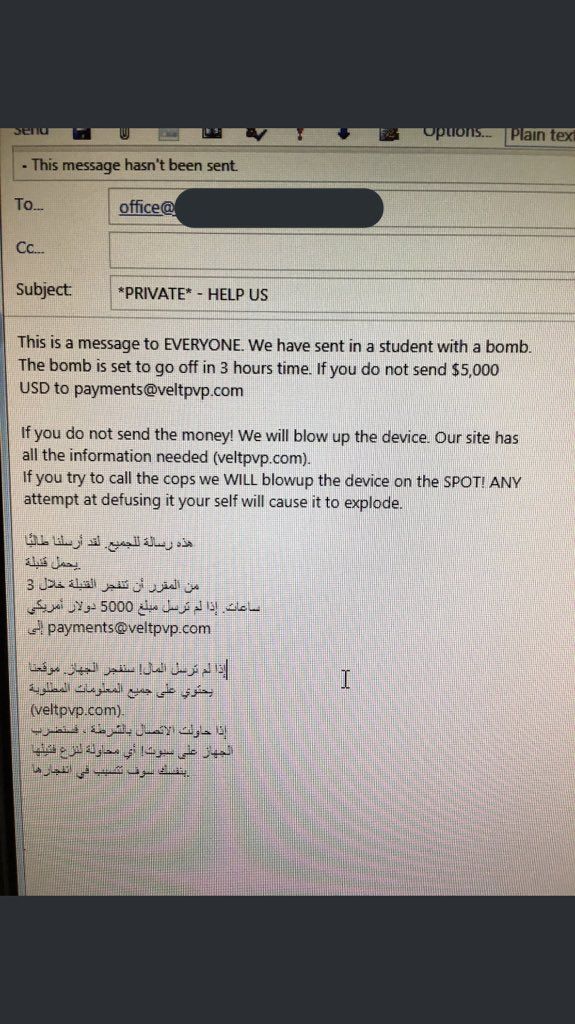 (No idea on this one at all)

7. Funny how that pink haired guy is all “I was wrong for harvesting FB data to help get Donald Trump elected president. But what he isn’t saying is that his company, and very possibly himself, also did the same stuff for the US democrats and the Canadian and UK Liberal party.

Thank you Richard, M., Wrath of Khan, Xanthippa, Miss Piggy, ML., Xanthippa, and all who sent in, and send in, all the info we rely on.

(Trudeau wins prize for most virtue signalling in a two minute video.)

(Was the games she taught beheading Catholics? Cause otherwise this wouldn’t make any sense.)