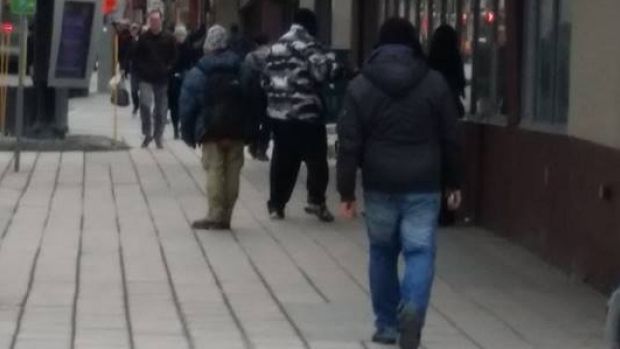 An Ottawa man has been charged with five counts of assault after a series of seemingly random attacks on people walking down Rideau Street Tuesday.

Stephanie McLeod said she was walking along Rideau Street near King Edward Avenue around 4:30 p.m. Tuesday when a complete stranger who had been leaning against a post quickly turned and kicked her in the thigh.

‘I didn’t understand. I didn’t do anything to antagonize this person.’

She said when she turned around to see who had kicked her, a man was filming her with his phone. […]

Police said in a news release Thursday afternoon that a 26-year-old Ottawa man has been charged with five counts of assault. The accused appeared in court Wednesday and was remanded into custody until March 19.

Police confirmed they’ve charged Mustafa Khoshnaw of Ottawa, 26, with five counts of assault after they investigated a string of complaints from people walking on Rideau.

Ottawa police are investigating after a man was stabbed in the stomach Thursday evening in Ottawa’s east end.

Police said in a news release the stabbing happened on North River Road near Donald Street around 6 p.m.

The victim, a man in his 40s, suffered non-life-threatening injuries, according to police.

No one is in custody and police said the investigation is ongoing.

(No witnesses I guess, Not even the victim must have seen the guy. The Western World has a stunning and unprecedented epidemic of invisible men attacking people all over the place.)