Two knife attacks on Praterstraße in downtown Vienna, at least 4 injured.
Update: Vienna Police announce one arrest made in connection with second stabbing. Connection to first stabbing not yet established. Suspect is an Afghan.

1. An original translation from heute.at:

An unknown person seemingly randomly stabbed passers-by on Wednesday evening on Praterstraße near subway station Nestroyplatz, and subsequently fled in the direction of Praterstern. According to first information, there are at least three critically wounded – they are in critical condition.

The exact details of the deed are still unknown. The perpetrator is currently on the loose. Police and special unit WEGA are carrying out operations. Officers in heavy equipment with assault rifles search the area. Police cars are patrolling the streets with flashlights.

Victims between 40 and 50 years old

According to police, the victims are one man and two women – a couple and their adult daughter. The two women have been stabilized by now, but the man is still in critical condition. Rescuers are in action with eight emergency vehicles and an emergency subway train.

After the deed, there was another person critically injured by knife stabbing at Praterstern. Police announce that they are investigating whether there is a connection between the two deeds. Praterstern is just a few walking minutes away from Praterstraße.

Current information on the operation in the #Praterstraße area: at 7:45PM, a perpetrator wounded three people with a knife. Shortly afterwards, a second assault occurred at Praterstern. The connection is subject of current investigation.

The search for the perpetrator is still ongoing. Heavily armed police officers secure house entrances. Around 9:20 PM, an ambulance with flashlights raced downtown.

Subways turned around
The subways around Nestroyplatz were rerouted as a precaution. One of the U2 trains waited for 10 minutes at Praterstern before it turned around and returned to Taborstraße.

Police are combing the immediate neighbourhood, the Kärntner Street and the Donau channel.

Witness Silvia Franke said she was about 100 meters (330 feet) away when the incident happened.

“I saw how someone in the middle of the street was screaming and shouting — I thought he was beating his dog judging from his hand movements,” she said. “And in reality he was stabbing this man.”

“He could have stabbed me as well had I been there by chance,” Franke said. “He had lost all control.” 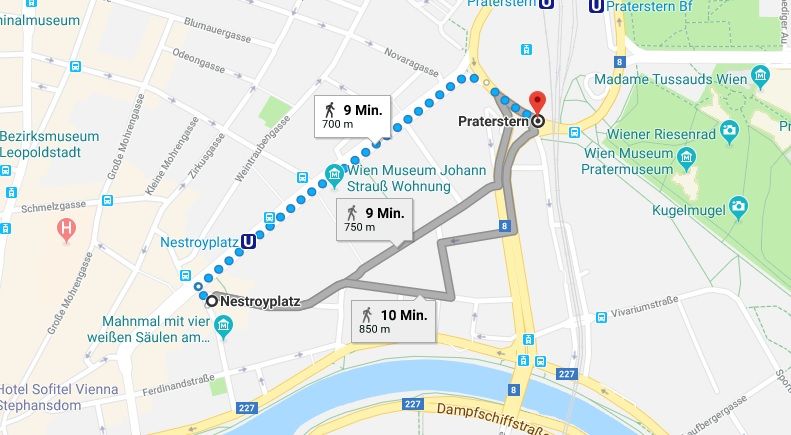 Praterstraße in downtown Vienna, between Nestroyplatz (l.) and Praterstern (r.)