1. In what appears to be a very Islamicly motivated copycat crime, four men in Toronto have been arrested for a forced child sex-slave gang referred to as a “human-trafficking” gang by local Toronto news.

Toronto residents Jahdine Desir, 19, Dane Cato-Simpson, 22, and Tahje Tucker, 18, are facing several charges, including procuring/exercising control over a person under 18, material benefit from sexual services provided by a person under 18, and accessing child pornography.

A fourth man, identified by police as 45-year-old Sukminder Lota, of Brampton, has also been charged with two counts of trafficking of a person under the age of 18 by exercising control, and financial/ material benefit from trafficking in persons under 18 years.

While it would be expected that any presidential event would have a flurry of imputed meanings follow it like a cloud of sweat bees, this article on the Obama portrait has some fun as well as points at what are at least some interesting coincidences.

The point about the time on the watch, 3:18, and the ring are especially interesting. So I used some photo enlargement software to look at them both. There is no doubt about the time on the watch, but the ring is still ambiguous in my option, although articles we have published here at Vlad in the past have shown photos of the ring which offered more clarity and seemed to show at least part of the declaration of Islamic faith in Arabic. Its also been reported that Obama already wore this ring before he was married and then continued to wear it as his wedding ring. 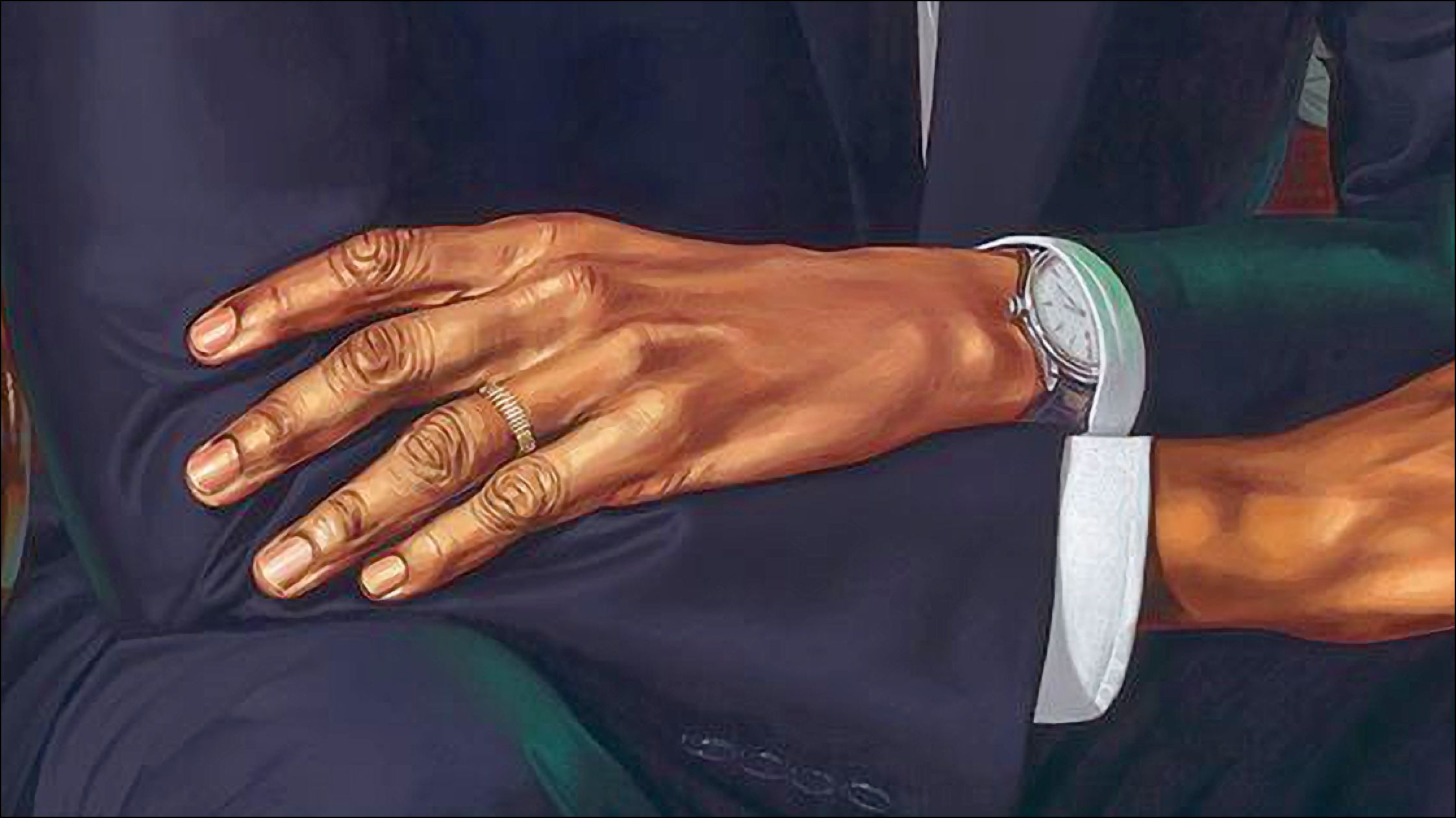 After showing it to The Baron at Gates of Vienna, he suggested that it seems to be between 3:18 and 3:19 and hard to be certain.

“Indeed, the religion in the sight of Allah is Islam. And those who were given the Scripture did not differ except after knowledge had come to them – out of jealous animosity between themselves. And whoever disbelieves in the verses of Allah, then indeed, Allah is swift in [taking] account.”

The rest of the reveals get a little wiggy but in no way inconsistent with the Artist’s other works.

3. Keeping up with the facts of the unravelling massive corruption of the Obama-Clinton regime is a full time job and overwhelming. For those that wish to be well informed, please do read the Reader’s Links posts since it broke and look for the videos.

This one is good as it covers the basics and gives a rough idea of where we are in relation to the overall nature of the scandal. What is interesting is that the danger of this one is much like the danger of flying a light aircraft especially before universal GPS. The real danger was in a failure to properly navigate. And this scandal is so large many will lost interest for exactly that reason.

5. Former leftist Prof. self-red pills and does excellent interview nailing the issues of the day. This is very good. Send it to all you know who are still choosing which pill to take.

6. Malaysian Muslims show their multicultural tolerance by making Chinese businesses take down references to the year of the dog, cause you know, Muslims don’t like dogs.

BUSINESSES marking the coming Chinese Year of the Dog in Malaysia have stopped displaying images of canines on their decorations and souvenirs over fears it will upset Muslims who live in the country and consider the animals unclean.

The country has a large Chinese population who are preparing to welcome in the new year.

But some shopping malls have decided not to have images of dogs, sparking an online backlash, CNN reported.

Malaysia has a growing Islamic population, with many Muslims observing the practise of ritually washing themselves if they come into contact with a dog.

One shopkeeper at the Sunway Pyramid near Kuala Lumpur said: “This is a multiracial country, when they do something like that it shows disrespect to the Chinese race here.

Thank you M., Xanthippa. Wrath of Khan, Richard, and many MANY more. There are a lot of comments and links to check in the Reader’s links the past two days. And well worth it.

Below, a 2012 talk by Alexandre Del Valle, the person who we posted a partial interview of this morning. He is exceptional. For those who have not seen it, please go and watch it to the end. I will repost below his 2012 talk at ICLA:

With luck and much hard work by Ava Lon, section 2 may come later today..