1, Saudi student on attempted murder charge for trying to kill a woman at a university campus in Vancouver.

Two men are being credited with saving a University of British Columbia student from a terrifying dorm attack.

Adam Casey and Luca Berg, who also study at the school, were near UBC’s Salish House residence on Tuesday when they heard distraught students saying a girl was being assaulted, according to CBC News.

“She was screaming,” witness Chantel Almeida told the outlet. She said the attacker had injured the woman’s throat with a knife. 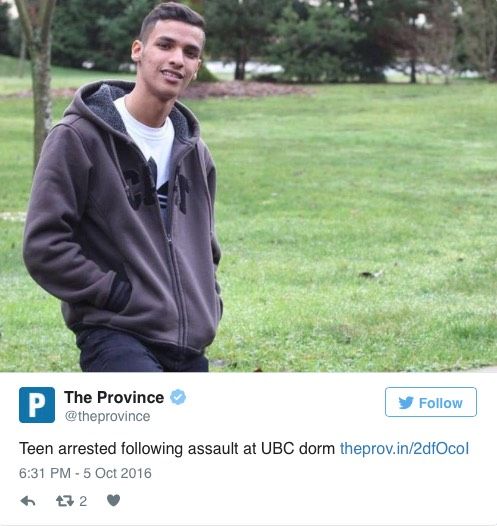 2. The enemies of Islam are attempting to delink terrorism from it. Terrorism is a fundamental of Islam. So sayeth the imam.

3. The European Union exposes again as an elitist graft machine.

The chief of the German police union claims that criminal migrants from North Africa are laughing at the German justice system as they are allowed to go free after committing crimes.

Cheif of the German police union Rainer Wendt has expressed severe concern regarding the increasing number of migrant criminals, especially those of a North African origin.  He claims that unless the justice system changes no real action can be taken to solve migrant crime, reportsKronen Zeitung.

“They despise our country and laugh at our justice,” Mr. Wendt said and warned that the police cannot address migrant crime unless the justice system is willing to step up and deport repeated offenders.

In a lengthy article at CounterJihad.com, Christine Brim asks, “Should Family Affiliation With Foreign Islamist Movements Prevent a Security Clearance?”

While the article concerns an official in the office of the Defense Department Inspector General named John Crane, an even more urgent example would be longtime Hillary Clinton aide Huma Abedin, who has similar family connections to the Muslim Brotherhood, and might be just a few months away from access to the Oval Office.

John Crane rose to the position of Assistant Inspector General after 25 years with the Defense Department, even though his father Robert Crane converted to Islam in 1980 and became “a high-level official in multiple Muslim Brotherhood and Hamas-affiliated organizations in the U.S. and Qatar.” Crane told Brim he was never once asked about his father’s affiliations during his long DoD career.

6. Iranian semi cult semi political dissident group against the Islamic Republic of Iran, protests the murder of 30,000 political prisoners in 1988.

Thank you Wrath of Khan, M., Xanthippa, Kathy, Richard, Ava Lon and so many more.

There is more to come tonight as well.

The Economist seems to be buying into the narrative as well these days. 7 Replies to “Saudi students teach situational awareness to Canadian women, Imams straighten the record on Islam and terror and more: Links 1 on Oct, 7 2016”