THIS is the head-cooking housewife and militia commander so feared by ISIS she has even received personal death threats from the terror group’s leader.

Machete-wielding Wahida Mohamed has been battling ISIS in its various guises since 2004. 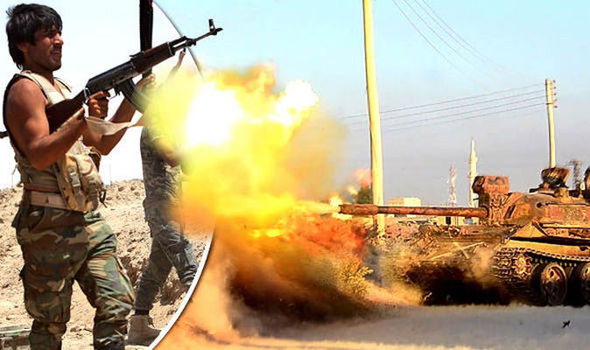 According to the extremists’ twisted ideology, Dabiq – a tiny town in northern Syria – will see a “major apocalyptic showdown with the armies of the infidel” that will result in the collapse of civilisation.

And Turkish troops backed by American commandos are understood to be just three miles from the town.

(This seems like a good moment to point out yet another critical distinction between islam and Christianity. In Christian eschatology it is clear that there is no way humans can know the timing of the end of things, and much more importantly, there is no way humans can influence events such that the end times are brought about. “No one shall know the hour” or something very much like that.

In Islam, it is believed that humans in fact cause the eschatological events which muslims are so looking forward to. And frankly 72 virgins aside, if I had to live under Islamic law I can totally see how they would be begging for death.

Muslims believe that they can force the events which are prophesied. Which rather make them less prophesy and more just long range planning really. And it appears they did just that.)

ISIS even named its terrorist propaganda and recruitment magazine after the settlement, which lies around six miles from the Turkish border.

Jihadists believe the Prophet Mohammed remarked that “the last hour will not come” until an army vanquishes the Romans at “Dabiq or Al-A’maq”.

One of the founders of ISIS, Abu Musab al-Zarqawi, is quoted in the vile group’s propaganda magazine as saying: “The spark has been lit here in Iraq, and its heat will continue to intensify – by Allah’s permission – until it burns the crusader armies in D?biq.”

(Good luck with that)

4. FCC Commissioner on Internet Oversight Switch: ‘If You Cherish Free Expression,’ ‘You Should Be Worried,’ This Is ‘Irreversible’

He added that Internet oversight is a case of, “if it ain’t broke, don’t fix it.” Pai further stated, “[I]f you cherish free expression, and free speech rights generally, you should be worried, I think, when there’s — this oversight role’s going to be ceded to potentially, foreign governments who might not share our values.”

(Audio file at site. Frank Gaffney of CSP also weighed in. Frankly, and without deep examination, this looks suspiciously like a plot by Obama, to get Islamic style blasphemy laws to be introduced to the Internet. And if Frank Gaffney is also concerned about this move, he likely thinks the same. Again, this is without a deep examination of the articles in question)

From Magyar tv:
-Budapest bombers were Muslims lost in the crowd during last year’s migrant crisis.
-Turkey building a 900km concrete and razor wire fence along Syrian border
-fences going up in Spain

-takes 8000 police and soldiers to patrol Serbian border. Every day.

The new logo is a joint venture of the Malaysian Institute of International Islamic Corporation (IKIAM) and the Malaysian Rubber Industry Smallholders Development Authority (RISDA).

Both organizations report that the market for halal and Muslim-manufactured products is expanding exponentially. They are hoping their efforts will encourage more Muslim-held companies to cash in and share in the Islamic market.

“The need for another halal logo is to distinguish products that were produced by Muslims against that of non-Muslims,” said RISDA Chairman Zahidi Zainul Abidin, which will help “Muslim entrepreneurs make forays into the halal markets locally and abroad.”

7. it looks like some European countries are getting a little fed up with their own governments doing a proxy suicide for them.

8. Sweden advised to bring conscription back in 2018

(Great idea. Can’t think of a way to get guns into Muslims hand’s faster than forcing them to join the military and arming them and letting them go in the population.)

The report suggests that young men and women should be made to complete questionnaires for future recruitment to the Armed Forces from July 1st 2017, while the obligation for those selected to complete basic military training would then apply from January 1st, 2018. Young adults born between 1999 and 2000 would be the first age group affected.

Under the new system, which is designed to help an increasingly stretched Swedish Armed Forces, the number of people called to obligatory service would depend on the volume of standard recruits available. It is expected to take in a few thousand drafted recruits each year.

“Not enough people are being recruited in the current system,” commented Annika Nordgren Christensen, who headed the inquiry.

Thank you Wrath of Khan, M., Richard, Maria J., Kathy,  Johnny U., Oz-Rita and all who sent in links and apologies to all who did and were temporarily forgotten, but not unappreciated. There are more translations to post. Much more tomorrow.

12 Replies to “Nineteen links indicating the effects of Islam, leftism and the wake of suffering they bring: Links 1 on October 1 – 2016”