1, A stabbing attack at a church in front of a congregation. The attacker is in custody. No eye witness reports about the appearance of the attacker or anything he may have chanted during his attack.

Yesterday, upon the stair,
I met a man who wasn’t there.
He wasn’t there again today,
I wish, I wish he’d go away…

Police SWAT teams have swooped on the area in Kentucky at Hillvue Heights Church in the US.

The rampaging knifeman is believed to have badly injured at least one person in the horror attack at around 09.30am local time.

Armed officers have sealed off the area as a helicopter flies over the area.

The attacker has been arrested.

Witnesses told WBKO local news that they saw lots of blood as the church service descended into chaos.

There are also reports that one of the pastors tackled the armed attacker.

Police have not confirmed a motive. 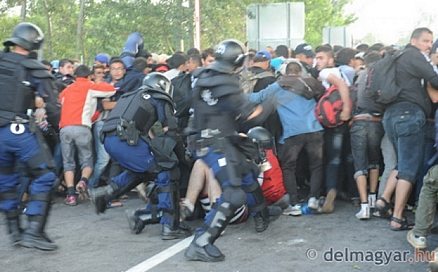 There was serious trouble at the border between Serbia and Hungary last September during the height of the migration crisis. Back then Hungary instituted border controls and started building a fence to try to stem the flood that was crossing from Serbia on the way to Austria and Germany. In one of the worst incidents, a mob of migrants, egged on by a man with a megaphone, reacted violently and stormed the new fence. The Hungarian police responded with tear gas and water cannons directed at the rioters, even when they were on the Serbian side of the border.

(Please click over to Gates for the rest of this non-repoted event.)

3. Muslims murder at least 13 Christians in ongoing war “by Islam to eliminate Christianity” in Nigeria

A survivor of the attacks told Morning Star News that the herdsmen killed two Christian women in Ninte village in the Jema’a Local Government Area (LGA) of the north-central state on Aug. 1, and that she knew of eight Christians killed in Gada Biyu on Aug. 2. Local newspapers reported nine people were killed in Gada Biyu, with an additional two men killed in Akwa’a on Aug. 3.

One of hundreds of Christians displaced from the area, Martha Yohanna of Alheri Baptist Church in Gada Biyu village, told Morning Star News that the attacks on Ninte and Gada Biyu villages were carried out by Muslim Fulani herdsmen from Aug. 1 to Aug. 3.

4. London, ON Imam calls on Muslims not to apologize for foiled suicide attack

Mazin AbdulAdhim, a prominent Imam of Iraqi descent in London, Ontario who is affiliated with the radical Islamic global movement of Hizb ut-Tahrir, says in reference to ISIS foiled suicide attack west of London on August 10, 2016, that Muslims should not feel pressured to apologize for actions that they are not responsible for. He maintained that the “crimes against humanity” committed by the West are far more worse than the attacks carried out by individuals.

The following are excerpts from Mazin AbdulAdhim’s Facebookposting on August 11, 2016:

“Aaron Driver, a Muslim convert from my city, was killed in a confrontation with the RCMP yesterday. They allege that he detonated a device inside a taxi, hurting himself and someone else, and was shot when he tried to detonate another one.

“It is important to not jump to conclusions about this information until details are made clear. The media clearly has a campaign against Islam and Muslims, and so we should be careful how we respond to news like this.

“Even if the information is true, we must not allow these sorts of events to cause us to be pressured to apologize for actions that we are not responsible for, nor should this cause us to become afraid of speaking the truth.

(The attack that took place in Thailand the other day was a much bigger deal than was generally reported, even here. However Gates of Vienna has a corespondent who was in Thailand and near the event at the time and sent in a proper report.)

BANGKOK (Reuters) – Thai police over the weekend found and defused five explosive devices that had failed to detonate when an as yet unidentified group carried out a series of deadly bomb attacks on popular tourist spots late last week.

Police said they had arrested one suspect following the bomb and arson attacks on Thursday and Friday that killed four people and wounded dozens more in some of Thailand’s best-known southern resorts and islands.

The attacks came just days after Thais voted to accept a military-backed constitution that the ruling junta, which seized power in 2014, has said will lead to an election by the end next year.

“These acts were undertaken by a group in many areas simultaneously, following orders from one individual,” Pongsapat Pongcharoen, a deputy national police chief, told reporters on Sunday, without elaborating.

A highly regarded researcher and academic has warned that Muslims in Europe view migration as the start of the Islamisation of the continent. Prof. Abdessamad Belhaj also detailed how globalists are using Muslim migrants to turn Western countries into socially divided societies of easily-controlled consumers.

The scholar of Islam and social sciences warned that large numbers of migrants are “calamitous” for the European people, and that neoliberal elites see Islamic terrorism, and state bankruptcy and collapse as collateral damage in their pursuit of endless wealth.

(Summary: Turkey legalizes child rape, gets annoyed with Austria for reporting it)

Turkey summoned Austria’s charge d’affaires in Ankara over what it said was “indecent report” about Turkey on a news ticker at Vienna airport, a foreign ministry official said on Sunday.

“Turkey allows sex with children under the age of 15,” read a headline on an electronic news ticker at the airport, images circulated on social media showed.

“Our disturbance and reaction over this display which tarnishes Turkey’s image and deliberately misinforms the public have been strongly conveyed to the charge d’affaires,” the Turkish ministry official said, adding that the headline was removed following the ministry’s intervention.

Turkey’s constitutional court last month ruled in favor of removing a provision in the penal code which identifies all sexual acts against children under the age of 15 as “sexual abuse” following an application made by a local court.

The 7-6 ruling by the panel of judges, which is to take effect in January 2017, stirred outrage on Turkish social media and among women’s rights activists, who voiced concern that it would lead to cases of child abuses going unpunished.

Thank you M., Wrath of Khan, Richard, Johnny U., Pete P. and a lot of great people who send in materials. We are still looking at more news from Europe to translate or title.

Sometimes when doing housework or other repetitive chores, I look for a lecture to listen to while working.

Only part way into this, but its already truly excellent. A must see and a must spread.