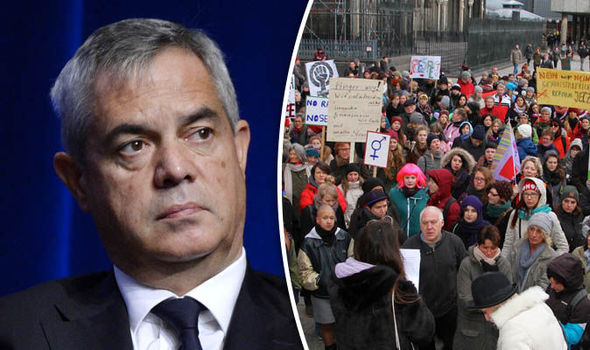 Patrick Calvar, chief of the Directorate General of Internal Security, told members of the French parliamentary commission: “We are on the brink of civil war.”

He said that the situation in France is on such a knife edge that it could just take one more major Islamist terror attack to lead to a huge right-wing backlash.

Speaking to the leading French newspaper, Le Figaro, Mr Calvar said: “This confrontation I think it will take place.

“Even another one or two attacks and it will happen. It therefore behooves us to anticipate and block all these groups.”

2. CIA director wants to cause an ice age with Con trails cause he believes in Global Warming. (Here is another video with an analysis of this video below)

3. Venezuela’s dictator puts the army in charge of food distribution.

4. Here is an example of some of the worst reporting, even by CBC standards, one may see today. Not a single witness report. No description and no names, not even of the one already charged and over 18. How exactly is this report supposed to make anyone safer in the area it happened?

5. Fliers and letters in parts of the UK are appearing in mailboxes asking people not to have dogs in public for Muslims.

(I have gone back and forth with Pym Purnell on this all day. I thought it was a hoax. Even the Arabic script looks like LOLZ backwards.

But when I put the text in google translate, as Pym suggested, it did in fact translate to “Purity” In English.

Then there is the accompanying letters, and then the testimony of those who claim to have received both the fliers and the letters. All this at the Breitbart link above.)

No it’s not a joke!, it’s been posted in letterboxes in Manchester! A nation of Dog lovers! WTF? pic.twitter.com/XC2kcSBzem

Thank you Nash Montana, Ava Lon, M., Wrath of Khan, Johnny U., and all who sent in links.

For anyone new to the site, PLEASE read the Daily Links Post comments. There is a lot of red meat there.