1, It’s not their fault, it’s yours! Swedish GIRLS blamed for rise in migrant sex attacks

Sweden has the worst rates of sexual violence

The damning police report, which is looking at why Sweden has the worst rates of physical and sexual violence committed against women and girls in Europe, has also excused refugees who it says “cannot handle the alcohol”.

Shockingly, the report revealed the majority of sex attack victims were under the age 15.

Police also admitted the majority of attacks have taken place in public places had been committed by migrants.

(They obviously did this because of lack of jobs, not enough basketball courts and exploitation by the West)

A 70-year-old Christian woman has been stripped naked, beaten and paraded through the streets by a mob of around 300 Muslim men in a village in southern Egypt.

The mob also burned down seven homes belonging to Christian families, according to an unusually outspoken statement issued by the local Orthodox Coptic church, after rumours circulated in the village that a Christian man was having a relationship with a Muslim woman.

4. Important update to the story about the Detroit home-invasion story from yesterday:

(Some worthy comments at The Rebel link above)

5. Pakistan is a partner for terrorists, not United States: Senator Rohrabacher US Senator Dana Rohrabacher has said Pakistan is a reliable partner for terrorists and not the United States, warning that the provision of millions in aid to Pakistani government in fight against terrorism would have a reverse outcome.

The US Senator was speaking to Voice of America’s Afghanistan during an exclusive interview.

Senator Rohrabacher further added that Islamabad considers the US airstrike against the Taliban leader a violation of its sovereignty as it has provided safe havens for the terrorists who are taking lives of thousands of people and innocent Afghans.

He said the United States will not be concerned regarding the feelings of Pakistan for the US airstrikes targeting the terrorists.

6. Remember the German Cardinal who lectured Europe on how evil it is for not cutting their own heads off to suit the Muslims? Well he did it again. This time, aranging to have one of the migrant boats brought to the actual train station in Cologne where all the rapes, robberies and molestations took place, and stood in it lecturing the Germans about how “The wounds on the migrant’s faces remind him of the wounds of Christ” and similar fallacies of false comparisons. We hope to have some of his 30 minute lecture titled later but for now, enjoy this picture of a commie dupe standing in a boat at a train station.

7. Sultan Knish: The facts about this history of “Palestine”

150 years ago, Mark Twain visited Muslim-occupied Israel and wrote of “unpeopled deserts” and “mounds of barrenness”, of “forlorn” and “untenanted” cities. 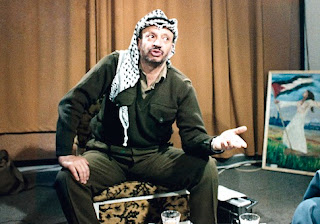 Palestine is “desolate”, he concluded. “One may ride ten miles hereabouts and not see ten human beings.” The same is true of the Palestinian Museum which opened with much fanfare and one slight problem. While admission is free, there’s nothing inside for any of the visitors to see except the bare walls.

The Palestinian Museum had been in the works since 1998, but has no exhibits. The museum cost $24 million. All it has to show for it are a few low sloping sandy buildings indistinguishable from the dirt and a “garden” of scraggly bushes and shrubs. The Palestinian Museum is open, but there’s nothing inside.

VIENNA: Austria’s interior ministry has asked the state prosecutor’s office to follow up on apparent regional irregularities in the absentee vote count for the country’s presidential election.

The move is a result of action by the Freedom Party, whose nominee Norbert Hofer was in the lead after polls closed Sunday but lost narrowly to a left-leaning candidate after absentee ballots were counted.

Ministry official Robert Stein Wednesday cited party officials, who said that the count began too early in and around the southern Austrian city of Villach.

The United Nations Security Council wants a global “framework” for censoring the Internet, as well as for using government propaganda to “counter” what its apparatchiks call “online propaganda,” “hateful ideologies,” and “digital terrorism.” To that end, the UN Security Council this week ordered the UN “Counter-Terrorism Committee” — yes, that is a real bureaucracy — to draw up a plan by next year. From the Obama administration to the brutal Communist Chinese regime, everybody agreed that it was time for a UN-led crackdown on freedom of speech and thought online — all under the guise of fighting the transparently bogus terror war.

The UN, ridiculed by American critics as the “dictators club,” will reportedly be partnering with some of the world’s largest Internet and technology companies in the plot. Among the firms involved in the scheme is Microsoft, which, in a speech before the Security Council on May 11, called for “public-private partnerships” between Big Business and Big Government to battle online propaganda. As this magazine has documented, Google, Microsoft, Yahoo, and other top tech giants have all publicly embraced the UN and its agenda for humanity. Many of the more than 70 speakers also said it was past time to censor the Internet, with help from the “private sector.”

Thank you Egri Nok, M., Nash Montana, Wrath of Khan, Johnny U. Xanthippa, ML and all who sent in materials.

7 Replies to “Swedes find new low in victim blaming, Egyptians torture elderly Christian for entertainment and more: Links 2 on May 26 – 2016”