The weekend brings surreal stories and massive evidence of government/media deceptions and deflections, similar to what one may see in wartime except it appears that in some ways at least, the governments and the media are on the side of the enemy.

Some of these are about Islamic manifestations of their religion in ways that are designed to crumple civilization and others just might be but without spending a lot of time chasing down witnesses how can we know? Like this one.

Has the US adopted the British euphemism “Asian” to avoid saying “Muslim”, thereby actually using racial terminology to avoid allegations of racism by naming the motivating ideology?

Then there is this. This likely has nothing directly to do with Islam, other than perhaps a symptom of the kind of civilizational decay that the culture of diversity brings. If there are many possible sets of equal values than no set of values are correct and the women caught stealing bras and panties at a Victoria Secrets store may feel indignant enough about it to mach back in to the store, after having escaped with her, ahem, booty, and throw another punch at the employee.

In Austria the polls are about to close and counting the postal votes begins. Hofer, the leader of Austria’s FPÖ, (Freiheitliche Partei Österreichs) the equivalent of Germany’s AfD, or Holland’s Freedom Party led by Geert Wilders, leads 50.2 percent. This will be an interesting day.

There is all kinds of news already out of Austria but it seems somehow muted. Not getting the attention they deserve. We will try and fix that as the day goes on.

1, Saudis promise that US bill allowing suits against the Saudis will open up the “Gates of Hell”. (I guess they mean they will invite us all to visit Mecca?)

TEL AVIV – The Saudi press slammed the U.S. for its “despicable” double standard in regard to a proposed bill that would allow victims of the September 11 attacks to sue the kingdom, claiming that the move would “open the gates of hell,” enabling all countries that have been wronged by the U.S. to sue it for war crimes.

The popular Saudi daily Okaz ran a scathing article translated by MEMRI, entitled, “Congress’s Satanic Deed Opens the Gates of Hell for the World’s Largest Country,” accompanied by an image of President Obama with a Star of David and the emblem of the Iranian regime on his forehead.

(They do have a point. It may be one of the vey few times Obama has it right. But the 23 pages should still be released)

2. Syria: Suicide bomber detonates his payload near a Dominoes in city center leading to gruesome horror. Here is a link to the video. I will not embed it. What Muslims consider sacred acts, are so horrifying that simply looking at the results can trigger, and perhaps even cause in the long run, PTSD.

The signs read, “There is no bread”.

Caracas (AFP) – If a visitor to Venezuela is unfortunate enough to pay for anything with a foreign credit card, the eye-watering cost might suggest they were in a city pricier than Tokyo or Zurich.

But of course no merchant is pricing at the official rate imposed under currency controls. It’s the black market rate of 1,000 bolivares per dollar that’s applied.

But for Venezuelans paid in hyperinflation-hit bolivares, and living in an economy relying on mostly imported goods or raw materials, conditions are unthinkably expensive.

Even for the middle class, most of it sliding into poverty, hamburgers and hotels are out-of-reach excesses.

“Everybody is knocked low,” Michael Leal, a 34-year-old manager of an eyewear store in Caracas, told AFP. “We can’t breathe.”

(Make no mistake about this. It was the dalliance with Communism that caused this)

Turkey’s new prime minister, Binali Y?ld?r?m, has vowed to boost efforts for the adoption of a presidential system as part of the new constitution in line with President Recep Tayyip Erdo?an’s demands after officially taking the reins of power from Ahmet Davuto?lu at an extraordinary convention.

“The most important thing we have to do today is to turn this de facto situation into a legal one and thus end the confusion. The way to do is with a new constitution and the presidential system within it,” Y?ld?r?m said in a statement to the Justice and Development Party (AKP) at the convention on May 22.

(Maybe they should have a separate show. Like, “Britain’s got Jihadis”. And people can bet on what their targets will be and how much damage they will do. One might argue thats a form of integration) 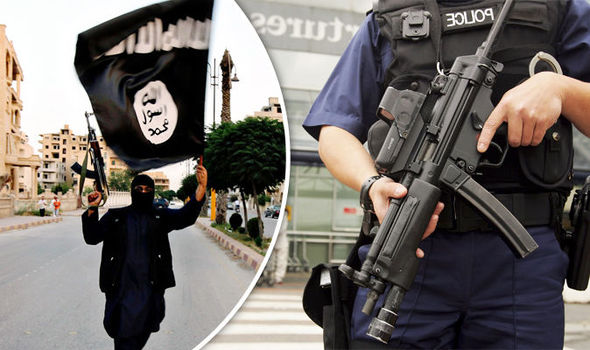 Sources last night revealed they are “desperate” to keep the judges, acts and audience safe from possible ISIS plots.

Airport-style security measures have been introduced at Fountain Studios in London, where the live shows are filmed.

Five semi-final heats will be broadcast between tonight and Thursday, while the final takes places next Saturday.

French authorities fear that radical Islamists may have slipped through the net to gain security clearance to work at Paris’s Charles de Gaulle airport.

Detectives are already investigating CCTV footage from the airport to determine whether an employee may have helped bring down the Egyptair flight to Cairo on Thursday. Now security sources are highlighting how weak security checks are for airport staff.

The Timesreports that all employees who work “airside” at the airport, such as maintenance staff, security personnel and baggage handlers, are theoretically vetted by police before they can start work.

In reality, however, the vetting consists of little more than checking for a criminal record and seeing if they are on the French intelligence agencies’ list of individuals deemed a national security threat.

Here is some nice fantasy writing. I guess whoever wrote this piece wanted it to be true so badly they just went ahead and made this up. Still, even false hope can feel like hope for a second.

The FpO, the rough equivalent of Geert Wilders’ People’s Freedom Party, appears to have won the elections in Austria. that is, he took all but 2 of the regions marked in yellow on this map. 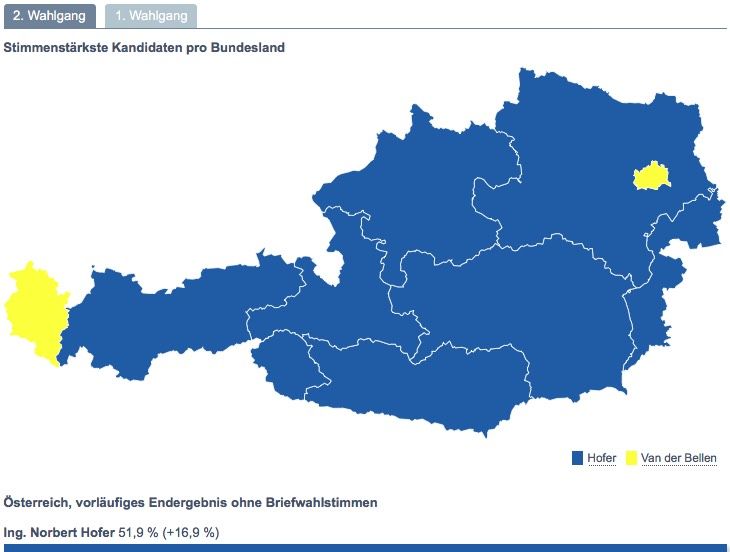 The problem is, now they count the postal ballots, which of course are designed for electoral fraud, and we know there is going to be lots of that. But in terms of the votes we can count, the Islam-critical party won by something close to 2%.