1, German universities are closing down mosques on campuses for violation of German law. Muslims protest by breaking more laws.

(Please click over to the Rebel link above to see the videos and get a cogent look at the issue. One I might add, that seems not to have been linked together by German media as far as we can see)

(An Egri Nok translation over at Gates of Vienna)

An intramural migrant brawl broke out yesterday between Muslims and Yezidis in the German city of Bielefeld in North Rhine-Westphalia. The fight was instigated by Muslim “refugees” — specifically Chechens — who did serious harm to some of their victims. The Yezidis in the surrounding area were numerous enough to gather together and fight back, taking revenge on behalf of their ethnic fellows with knives and clubs.

Many thanks to Egri Nök for translating this article from Neue Westfälische:

Bielefeld-Oldentrup. It seems, a religious war between Muslims and Yezidis escalated near the refugee shelter Oldentruper Hof.

The trigger was a mass brawl that took place around 6 pm on Potsdamer Street 500m from the Oldentruper Hof. It seems a group of 15 Chechens waited for a group of Yezidis and unexpectedly attacked them. Everyone involved in the brawl lives in the refugee home. The Chechens used clubs and knives and gravely wounded some of the victims.

(This appears to be a Facebook page about this attack, which busts the media narrative that it was a “mass brawl” and not an attack by Muslims against Yazidi) 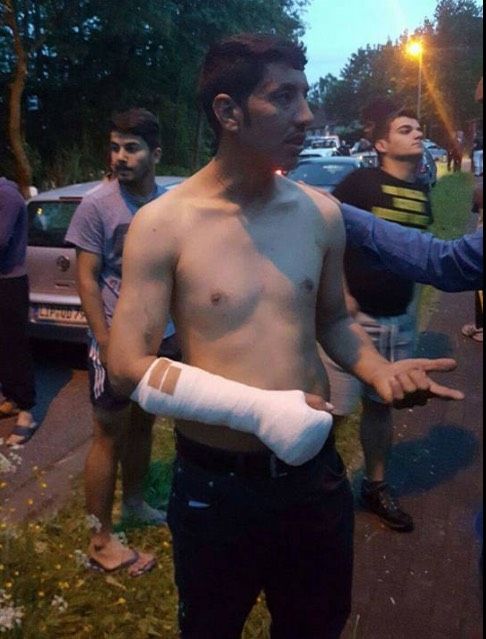 The EU-Turkey migrant deal has suffered a blow – after a Greek court set a precedent, by ruling against sending a Syrian asylum seeker back to Turkey. Judges deemed the country ‘unsafe’ – saying that <strong>there were no basic human rights there</strong> and noting also the risk of being illegally sent back to Syria. However, conditions for migrants in Greece have also been slammed – by human rights groups.

(And that is because J Street, like Black Lives Matter, and a hundred other fake identity groups are not actually advocating for the groups referred to in the name, but are in fact usurping their moral authority in order to use that authority as a battering ram against classical civilization.) J Street received more than half a million dollars to advocate for the Obama administration’s controversial nuclear deal with Iran, it has been revealed.

The liberal Jewish group, which bills itself as “pro-Israel and pro-peace” but which critics say takes solely anti-Israel stances, was paid the money by the White House’s main surrogate organization for selling the deal.

The Ploughshares Fund was named in an explosive New York Times profile of Obama aid Ben Rhodes, in which the President’s chief spin doctor listed the central groups responsible for creating an “echo chamber” in order to promote the deal, even when the White House’s official line didn’t jibe with the facts.

6. Courageous Christian to the end – last words of girl burned alive by ISIS: FORGIVE THEM

7. Lars Hedigaard on the Islamization of Norway

Bulgarian Minister of Interior and Deputy Prime Minister Rumyana Bachvarova and Defence Minister Nikolay Nenchev inspected a newly constructed border fence, aimed at preventing refugee flows from Turkey, at the border town of Malko Tarnovo, Sunday.
Bulgarian authorities first started erecting the fence along its 274-kilometre (170 miles) border with Turkey in November 2013. Bulgaria has already constructed 100 kilometres (62 miles) of the fence and aims to have 132.5 kilometres (82 miles) finished by July.
Moreover, Prime Minister Boyko Borisov has recently announced that Bulgaria is also ready to build a fence on its border with Greece.

Thank you M., Dan F., Buck, Snaphanen, Gates of Vienna, Wrath of Khan, Xanthippa, and all who took the time to post links.

You can see why Obama doesn’t mention Islamic terrorism in any way, shape or form. Once you drop the “I” word, then the argument is that you need Islam to fight Islam. And Muslims to fight Muslims.

This is bad enough in the Muslim world where we are told that we have to ally with the “moderate” Muslim governments of Saudi Arabia and Pakistan to fight the Muslim terrorists whom they sponsor.