1. The cult of social justice warriors

(This video ties in somewhat with my personal theory that for a lot of contemporary college students, their extreme leftist views are actually driven by the idea that pretty much anything is less scary than getting a job and being responsible to yourself and your community.)

2. The Archbishop of Cologne, yes, the land of mass muslim rape of the local kaffirs, shills for Islam in this video against the German classical liberal party against Islamic mass immigration. Fortunately the Austrians didn’t agree and if the church was really a Catholic church they may object to their senior members making political videos while being a tax-free institution.

3. Trudeau seems to get it about right on the decapitation of the Canadian hostage in the Philippines. That is a relief.

4. ‘What you get for dealing with dictators’ – German PP leader Kramm to RT on his Erdogan poem arrest

The head of the Berlin branch of Germany’s Pirate Party, who was arrested for citing an insulting poem about Turkish President Erdogan, has told RT people should expect to lose their freedom of speech when their government “signs deals with dictators.”

Bruno Kramm was arrested on Friday for quoting a line from Jan Boehmermann’s satirical poem about Turkish President Recep Tajiip Erdogan during a rally supporting the comedian. The latter was forced to suspend his TV show last week after Chancellor Merkel heeded Erdogan’s calls to begin criminal proceedings against the famous satirist. He is now being prosecuted under a rarely used section of the German criminal code – Section 103 – for “insulting a representative of a foreign state.”

5. Turkish government in urgent need of a team of experienced proctologists

Thank you Xanthippa, M., Richard, Wrath of Khan, and all who sent in materials. More to come as the work gets done. 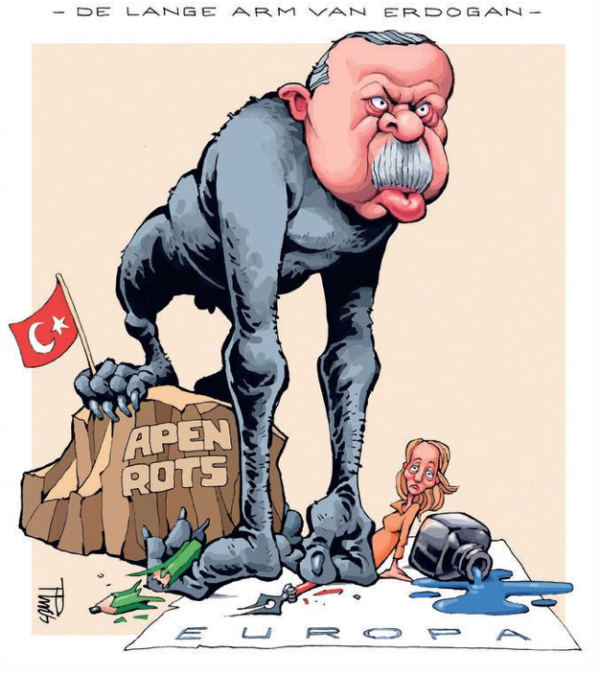