1. Mark Steyn on Merkel’s prosecution of a TV comic

Max Miller, the “Cheeky Chappie” of Britain’s music hall, liked to say that the great thing about comedy was that it was the only job where if you’re really bad at it nobody laughs at you. The dead hand of the demographically exhausted German state is taking it to a whole other level:

The German government has approved a criminal inquiry into a comic who mocked the Turkish president, Chancellor Angela Merkel announced.

Health officials in Salzburg are on the alert after an asylum seeker staying in a luxury hotel converted into an refugee home was found to be suffering from a deadly disease spread by lice.

The man from Somalia had complained of intense pain and a high fever, leading to doctors being called out. On being taken to hospital, he was put in the intensive care ward on arrival and tests later confirmed he was suffering from the potentially deadly louse-borne relapsing fever, a rare disease spread by lice.

The asylum seeker had been given accommodation in the form of VIP Hotel Kobenzl in Salzburg, which had been converted to an asylum home to cope with the large number of refugees coming to the region.

Salzburg health officials quoted in local media said they had registered a growing number of diseases in asylum homes that until recently were thought to have died out in Europe. But the latest case caused particular concern.

(Not to argue with the excellent blog, CIJ News, but there is no such thing as a ‘Canadian Imam’. Either one is Canadian and has Canadian values and allegiances, or one is an imam. Quite frankly I think most imams who are being honest would agree with this and the dishonest ones would agree with each other on this)

Abu Ameenah Bilal Philips, is a Canadian and Toronto-based Muslim scholar, was born as a Christian in Jamaica in 1947 and grew up in Canada, where he accepted Islam in 1972.

In recent years he was banned of entrance to or was deported from several countries, including Australia, UK, Germany, Kenya, Bangladesh and the Philippines, reportedlybecause of radical views or security reasons.

Europe is in the midst of the “most serious crisis since World War II” thanks to weak European Union (EU) elites letting in over a million migrants, former Czech President Vaclav Klaus has said.

In a robust speech at the Institute for Applied Systems Analysis (IIASA) in Austria, Vaclav Klaus blamed Europe’s migrant crisis squarely on the defects of the EU’s “post-democratic” institutions and the “absurdity” of the bloc’s guiding ideology.

He also ridiculed the idea that the newly-arrived migrants would contribute to the continent’s economy by filling gaps in the labour market.

“The migrants we see in Europe these days do not come here as a labour force,” he said, adding that there is in fact no labour shortage in the first place.

A couple originally from Iraq, later domiciled in Dubai, moved to the San Diego suburb of El Cajon and brought with them their “servant” they had acquired in Dubai.  The woman, identified by police as W.M., managed to smuggle out a handwritten note asking for help, which resulted in arrest of the couple on charges of  “labor trafficking.”  But an agent who helped bust them was not so indirect.  Via the San Diego Union Tribune:

“Today’s arrests bring to light the sad reality of modern day slavery,” Dave Shaw, special agent in charge for U.S. Homeland Security Investigations in San Diego, said in a statement. “… Forced labor, which often involves individuals who are held in isolation, degraded, and most alarming — stripped of their basic human freedom — has no place in a modern society.”

The couple charged, Firas Majeed and his wife, Shatha Abbas, have pleaded not guilty.  The story told to police by W.M. is heartbreaking:

A $16-million RCMP project to help keep dangerous refugees out of Canada has turned out to be an expensive security flop.

An internal evaluation says the screening project delivered information too late, strayed beyond its mandate, and in the end did almost nothing to catch refugees who might be linked to criminal or terrorist groups.

Meanwhile, 30 Mounties were tied up for four years on duties that did little to enhance Canada’s security.
FedElxn Conservatives 20150909

Then prime minister Stephen Harper said in Welland, Ont., on Sept. 9, 2015, that Canada needed to proceed cautiously in taking in refugees from war zones because they had to be properly screened for criminal and terrorism links. (Adrian Wyld/Canadian Press)

“The current approach does not appear to provide much by way of relevant information to support the admissibility screening of refugee claimants,” concludes the Sept. 29, 2015, report, obtained by CBC News under the Access to Information Act. 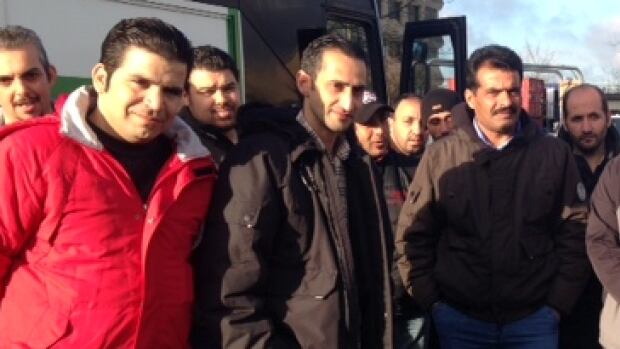 Some 60 asylum seekers have taken part in a massive fight at a refugee center in the Swedish town of Brannberg. Staff at the center were forced to escape the premises, local police said.

The ruckus started early on Friday morning, NSD media reported. Fifteen people were apparently the instigators of the brawl, which saw dishes being thrown around the premises.

“We have information about the injured,” Provincial Police Duty Officer Thomas Shäufele told NSD. He added that authorities will have to use interpreters help to find out why the fracas erupted.

In a blunder reeking of the fallout caused by supplying Stinger anti-aircraft missiles to 1980s mujahideen in Afghanistan, civilian airline passengers are now under threat from Syrian jihadists armed with portable surface-to-air missiles (MANPADS).

Reports say some American-backed jihadi groups are being equipped with US-made MANPADS. Indications are they’re obtaining these advanced weapons either directly or indirectly from the US or its Mideast allies in connection with a recent escalation in the fighting in Syria.

On April 2, fighting broke out between western-backed al-Qaeda affiliates and the Syrian army, ending the Syrian ceasefire. The groups that broke the ceasefire included al-Qaeda in Syria (al-Nusra), the Chinese Uyghur Turkistan Islamic Party (TIP), The Levant Brigade, the Freemen of Syria (Ahrar al-Sham), Division 13 and other jihadi groups. According to AP, the US-trained and armed Division 13 is now fighting alongside al-Nusra and Ahrar al-Sham.” The latter two are part of the Turkey/Saudi/Qatar-backed Army of Conquest.[1]

Here is a cool little animated video on supping with new agers. Enjoyable and not entirely OT