1. This is an extraordinary expose of at least one kind of Islam by the BBC!

The resolution in no way referred to Islam or to whether Islam itself is to blame for global terrorism. It did not require anyone to contemplate the fact that the terrorists responsible for 9/11 were Muslims. “It merely stated that 9/11 has had a lasting effect on many students, and ought to be reflected upon for a single moment, once a year.”

But according to the Minnesota Republic, the resolution proved oddly controversial. MSA Director of Diversity and Inclusion, David Algadi, voiced “severe criticism” of the resolution.

he said. Algadi expressed concerns- in an email to the Washington Post – that efforts to recognize 9/11 are sometimes “thinly-veiled expressions of Islamophobia.”

3. Leaflets available at a Muslim school warn against adopting British customs and watching TV – and say women should not go to work.

A private Muslim school in Yorkshire is promoting an extreme form of Islam, claiming that Jews are engaged in a global conspiracy to take over the world and that adopting British customs is forbidden.

The Islamic Tarbiyah Academy in Dewsbury teaches 140 primary school children in an after-school madrasa and runs full-time classes for over-16s and adults.

Mufti Zubair Dudha, the centre’s founder and head, is a respected cleric from the orthodox Deobandi sect which is thought to control half of all mosques and madrasas in the UK.

In one leaflet Mr Dudha quotes the Protocols of the Elders of Zion, an early 20th Century anti-Semitic forgery, which claims to prove Jewish people are engaged in a global conspiracy.

(This dovetails nicely with item 1. Its also interesting how those involved in a global conspiracy to control the world always claim that Jews are involved in a global conspiracy to rule the world. I would suggest to any of those who are considering possible validity of that idea to go to just one Friday night dinner at a Jewish family’s home and see if the group agrees on any one thing enough to implement it as a standard. Then decide if Jews can organize a global conspiracy to rule the world. Personally I think thats more the province of the collectivists like Western far left and Muslims who submit to dogma at the expense of other people’s lives)

Funny how multiculturalism never includes ours

Stanford University students rejected a resolution during their spring election that would have brought Western Civilization courses back to their curriculum.

Only 14 percent of the student body voted in favor of the motion, with 1992 voting against and 342 students voting in support of the initiative.

The resolution was put on the spring ballot for Stanford’s 2016 election after The Stanford Review campaigned aggressively to restore Western Civilization courses to the school’s core requirements. Among the Review’s campaign efforts was the circulation of a petition that received hundreds of student signatures, forcing students to cast a vote on the issue during this year’s election.

Notably, the petition received over 370 signatures yet only 342 students actually cast a favorable vote.

German counter-intelligence believes that at least 29 former soldiers from the country have left to join Islamic State in Syria and Iraq. An internal report also revealed that 65 active soldiers are being investigated for alleged jihadist sympathies.

The report was undertaken by the German military counter intelligence service (MAD), which was seen by the DPA news agency. The documents show that at least 29 former German soldiers have fled to the Middle East to join Islamic State (IS, formerly ISIS/ISIL).

(A right I am dead certain he would deny to most other people. Warning: Auto play video of one of his simple tunes at link)

In the article linked above there is praise for a petition allowing Springsteen the right to refuse service to North Carolina because he doesn’t agree with their laws forbidding old men to go into little girl’s toilets. Yet I feel confident that if he was asked if those Christian bakers should be allowed the right to deny service to homosexuals getting married I know what the answer would be. ‘Freedom of association for me, and not for thee’.

7. Preliminary update on the story about Muslim migrants choking and threatening and claiming Islamic Supremacy in Halifax school yards.

8. France: Police pepper spray Nuit Debout activists in Paris. (The name means Rise up at Night) but so far I have no idea what they are rising up about)

9. Curry house chef prepared food after wiping his bottom with his bare hands because he doesn’t use toilet paper for ‘cultural reasons’

(For the Halal restaurant file) 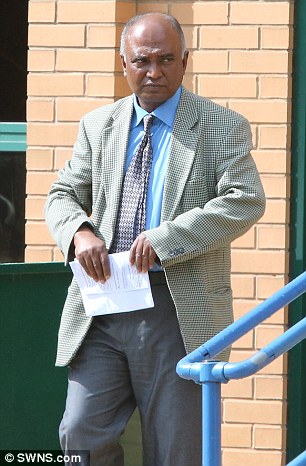 A takeaway chef wiped his bottom using his hands before preparing food because he does not use toilet paper for ‘cultural reasons’, a court heard.

Mahbub Chowdhury, 46, from Swindon, was found to have a filthy bottle in the kitchen of Yeahya Flavour of Asia, which inspectors concluded was covered in faecal matter.

When questioned, he said he filled the empty milk bottle with water from the kitchen taps before using it to clean his backside after going to the toilet.

Chowdhury prepared meat and fish curries at the takeaway, which was run out of a rented kitchen at the Nine Elms pub.

The chef, who no longer works at the takeaway, pleaded guilty to ten counts of breaching food hygiene regulations at Swindon Magistrates Court.

He was fined more than £5,000 last year for ten similar offences relating to food hygiene.

16 Replies to “BBC exposes one flavour of Islamic horror, Western students vote against the West, French protestors get peppered for some reason: Links 1 on April 13 – 2016”