1. Femen does an interesting protest for a worthy reason. 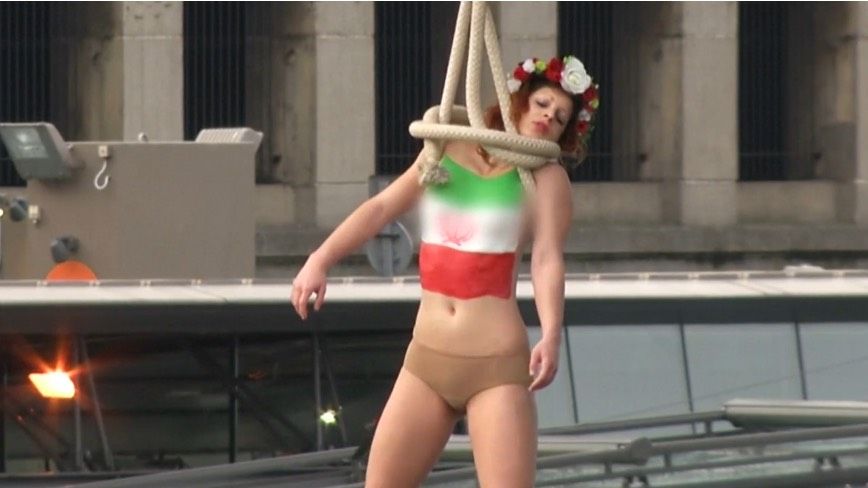 (The video, which is well worth seeing, is at the link. The embed code did not work properly for this WP site)

2.Tony Blair says ‘many millions’ of Muslims hold views that are ‘fundamentally incompatible with the modern world’

(Someone must have spiked his drink with the Red Pill)

Tony Blair has said that “many millions” of Muslims hold a viewpoint that is “fundamentally incompatible with the modern world.”

Rejecting arguments that ISIS is simply “tens of thousands of brainwashed crazies,” he said ISIS, the militant group also known as the Islamic State, ISIL, or Daesh, “does not seek dialogue but dominance.”

“It cannot therefore be contained,” he said. “It has to be defeated.”

To mitigate against such attacks, the former British prime minister argued for “active on-the-ground military support” for Arab armies, saying ISIS militants “have to be crushed.”

3. Odd group of video makers explored forbidden parts of Montreal’s subway system and made a video which would be of considerable interest to residents of that city who may have less than artistic ambitions.

4. A wonderful musical look at the life and philosophy of Turkey’s sultan, Erdogan

Erdogan, famous for his self mocking humour and ability to examine himself in a critical way, summoned the German Ambassador over the matter.

(If the people of Syria want Assad out so badly, why are so many of the opposition, nearly all of them it seems, religious Sunni muslims from everywhere else. Europe largely it looks like)

PARIS: The parents of a Syrian soldier allegedly decapitated by a French militant extremist have taken their quest for justice to a Paris court where they gave evidence against their son’s suspected killer, their lawyer said Tuesday.

The soldier, identified as Ghaisse M., was among a group of prisoners, including American aid worker Peter Kassig, decapitated by ISIS in November 2014.

One of the killers was identified from a grisly ISIS video of the execution as Maxime Hauchard, a 24-year-old Frenchman from Normandy, and an international warrant was issued for his arrest.

French authorities have opened a judicial inquiry into “murders linked to a terrorist act” over the executions.

“The Syrian justice system cannot function in the current context. It is up to France to judge its citizens when they commit atrocious crimes in our country,” said Ghassan M., the father of the soldier, who has filed a civil lawsuit against Hauchard in France.

6. Remember when a free Yoga class at Ottawa U was shut down because of one accusation of the newest weapon of cultural Marxism, cultural appropriation?

That was something at the time this site hammered on. The reason being, if the line of reasoning for action is accepted, there is no limit to how it can be abused against the one group it will be applied to. White (more or less) Christians and mostly males.

Here is the newest brilliant example from what looks like Carleton U.

Of course if this woman were to go to a doctor at government expense and get the benefit of thousands of years of Greek thought as opposed to seeing a Nigerian witch doctor or whatever her genetic heritage might be, that would not be cultural appropriation. But a blonde guy with a pseudo-rebelious hair cut, now that is.

This particular event may have been a joke on the part of the woman interfering with the man, its hard to tell. He didn’t seem to feel that it was. But this is clearly the next vector of cultural-Marxist rhetorical weapons and we will see more of it before someone finally calls BS.

7. In a similar video, a man goes out and canvases for Trump and for Sanders to see who’s opponents are more aggressive and violent.

The answer is no surprise but its nice to see it laid out this way.

(The way it works is, you can IMAGINE that something someone said offends you, then you can use your own offense at the said thing, real or imaged, as license to act against anyone you can impute as a proxy for that speaker)

(What could they possibly have been chanting?)

APPLE VALLEY (CBSLA.com) — Federal and local law enforcement authorities Tuesday are investigating after 17 men were detained for reportedly firing off hundreds of rounds in a remote part of Apple Valley.

San Bernardino County Sheriff’s deputies and an FBI agent were among the units that detained the men – reportedly all of Middle Eastern descent – who were camping out in the Deep Creek Hot Springs area Sunday morning, authorities said.

“They were up all night chanting ‘Allah akbar’-type stuff,” an unidentified officer is heard saying on the audio recording.

Thank you Wrath of Khan, M., The Rebel.Media, [email protected] and many many more for comments and links. More to come.