Located at 391 Burnhamthorpe Rd., East, Oakville, Ontario, ICNA Canada emphasizes that “the propagation of true and universal message of Islam is only possible in Canada when whole Canadian Muslim Community transformed into a Dawah community by practicing and propagating the true Islamic Way of Life. With the vision of building an exemplary Canadian Muslim community it is very important to spread the word of Islam…”

Dr. Iqbal Massod Al-Nadvi is the Amir (President) of Islamic Circle of North America (ICNA) Canada and is also serving as Chairperson of Canadian Council of Imams. he also served as Director of Al-Falah Islamic School in Oakville, Ontario from 2004 to 2011, prior to which he served as Imam of Muslim Association of Calgary Islamic Center from 1998-2004 and as a member of the University of Calgary chaplaincy team.

Zunera Ishaq, the woman that stood at the centre of the “niqab debate” in the Canadian election campaign, works/ed for the Islamic Circle of North America (ICNA).

On its official website ICNA Canada shares with its members, followers and supporters the book “Riyad us Saliheen” (“The Gardens of the Righteous” ???? ????????) compiled by Imam Zakaruya Yahya Bin Sharaf An-Nawawi, a Sunni Shafi’ite jurist and hadith scholar who lived in 13th century.

The Gardens of the Righteous (Arabic: Riyadh as-Salihin), is a compilation of verses from the Qur’an and hadith by Al-Nawawi. It contains a total of 1905 hadith divided across 372 chapters, many of which are introduced by verses of the Quran.

(Please click over and read Jonathan’s full analysis on this important issue, and expose of the now-so-common deception)

2. Two US Marines attacked and left for dead in the USA

(One can be anything. Two starts to look like a movement. Video at source link)

3. Gavin McInnes of Rebel.media exposes the intellectual slight of hand of the anniversary edition of Charlie Hebdo on the mass murder of its staff by muslims in the name of allah. But you wouldn’t know that from the paper itself.

4. Andrew Bostom tweeted out an interesting page from General Pershing’s memoirs about islam in the Philippines today. 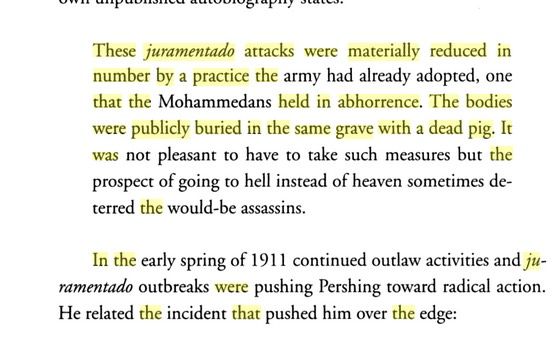 The incident took place between 5.30 pm and 7.30 pm on Thursday evening in Kiel, the capital of Germany’s northernmost state, Schleswig-Holstein.

As the teenagers aged between 15 and 17 went for dinner together, they were followed by two young men, both from Afghanistan, police report.

The two men then started filming the girls with their phones as they sat in a restaurant near the harbour.

According to statements the girls gave police, the men then appeared to send the video or pictures to other people.

Within a few minutes a group of up to 30 men had arrived at outside the restaurant.

Two of the girls ran from the restaurant at this point and managed to shake off a group of around ten men who followed them.

But when they returned to look for their friend, two men sat next to them and began again to harass them.

The perpetrators are believed to have mainly been of migrant background.

Meanwhile, provincial police chief, Gen. Ewaz Mohammad Nazeri, said the Taliban commander was killed after he entered into the house of the woman, an act that is considered a serious breach of privacy by the Afghans.

(Wow it sounds like Afghanistan has a version of the American ‘Castle’ law that allows the use of lethal force on home invaders. I wonder what the multicultyists, Sunshiners they call them in Europe, would say about that)

7. Father ‘Furious’ After His Son Was Reported to the Police For Looking At the UKIP Website

A schoolboy has been hauled out of class and interviewed by police after he accessed the UK Independence Party’s (UKIP’s) website on school premises, which teachers deemed to be “politically incorrect.” His father has reacted furiously, warning “they’re like the thought police”.

On Wednesday morning, 15 year old Joe Taylor was shocked to be removed from class at Wildern School in Hedge End, Southampton, to be quizzed by a Hampshire Police officer over his use of school computers to access the UKIP website.

According to his father, Mick Taylor, a UKIP supporter himself, the youngster was accused of being a “political activist for UKIP” which they said made him susceptible to being groomed by the English Defence League (EDL).

8. Denmark: Supporters of Lars Hedigaard, arrested for wearing T shirt with the name of his attempted assassin

(This really does give a whole new meaning to the term, “Fashion Police”)

(Anyone got a problem with that? Wait what? Oh! I have a Guinness in the fridge!)

“The kingdom will continue its fight against the terrorist activities of the so-called Hezbollah with all available means,” the Saudi Interior Ministry said in a statement carried by the state news agency SPA.

The Sunni Muslim kingdom last week suspended aid worth $3 billion to the Lebanese army over the Beirut government’s failure to sign up to statements condemning attacks on Saudi diplomatic missions in Iran.

Thank you Richard, M., Wrath of Khan, Buck, Maria J., and many more who sent in materials. There is more coming. Some of this material took quite a bit of time, so its more a quality day than quantity. But check back later.