1. Interesting short ‘Man on the street’ interview in Germany. Some people feel that perhaps there may be some degree of media bias, and perhaps a problem with immigration.

U.S. President Barack Obama urged Russia on Sunday to stop bombing “moderate” rebels in Syria in support of its ally Bashar al-Assad, a campaign seen in the West as a major obstacle to latest efforts to end the war.

Major powers agreed on Friday to a limited cessation of hostilities in Syria but the deal does not take effect until the end of this week and was not signed by any warring parties – the Damascus government and numerous rebel factions fighting it.

Russian bombing raids directed at rebel groups are meanwhile helping the Syrian army to achieve what could be its biggest victory of the war in the battle for Aleppo, the country’s largest city and commercial center before the conflict.

There is little optimism that the deal reached in Munich will do much to end a war that has lasted five years and cost 250,000 lives.

The Kremlin said President Vladimir Putin and Obama had spoken by telephone and agreed to intensify cooperation to implement the Munich agreement.

(So in other words, stop fighting the Islamic State, what Obama pretends NATO is doing, and let them destroy Assad, which is the only thing Obama cares about. This isn’t going to end well for anyone)

3. Saudi Arabia moves troops to Turkey as ‘base for Syria invasion’

(This is not going to end well. But Russia is better equipped to fight than the muslims so…)

Saudi Arabia is sending troops and fighter jets to Turkey’s Incirlik military base ahead of a possible ground invasion of Syria. The Turkish foreign minister, Mevlut Cavusoglu, confirmed the deployment in a statement to the Yeni Safak newspaper on Saturday, days before a temporary ceasefire is due to come into force.

“Saudi Arabia declared its determination against Daesh — the Arabic term for Islamic State (ISIS) — by saying that they were ready to send both jets and troops,” he said. “At every coalition meeting we have always emphasised the need for an extensive result-oriented strategy in the fight against the Daesh terrorist group,” he added.

(In a recent video interview with the Saudi FM., he made noises about fighting ‘Daesh’ but made it clear they intended to do that by taking out Assad, in essence, giving victory to the  Islamic State)

4. Pro and anti immigration people face off in Nuremberg, with Russians making up the anti-immigrant portion.

News is emerging on Facebook today that Tommy Robinson, co-founder of PEGIDA UK, is in hospital following an attack during a night out in hometown Luton last night (13/02/2016).

It seems Tommy, on a night out with his wife, was found unconscious with head injuries.  He is currently in hospital, but thought to be recovering.

This is not the first time Tommy Robinson has been attacked and he has been hinting more lately than normal that he feels he is in physical danger.  His mistrust of the local police affords him little feeling of protection from authorities.

Tommy’s recent appearance on Arab TV channel Al Jazeera sparked controversy, receiving particular infamy due to a portion being cut by the station.  I did feel that particular appearance could cause him harm, being a very direct form of confrontation and one likely to be well publicised.

6. Daily Mail picks up the Calais video we titled a few days ago. Calls us all “Far Right extremists” proving that the CVE is real and if you don’t conform, you will be punished one way or another. 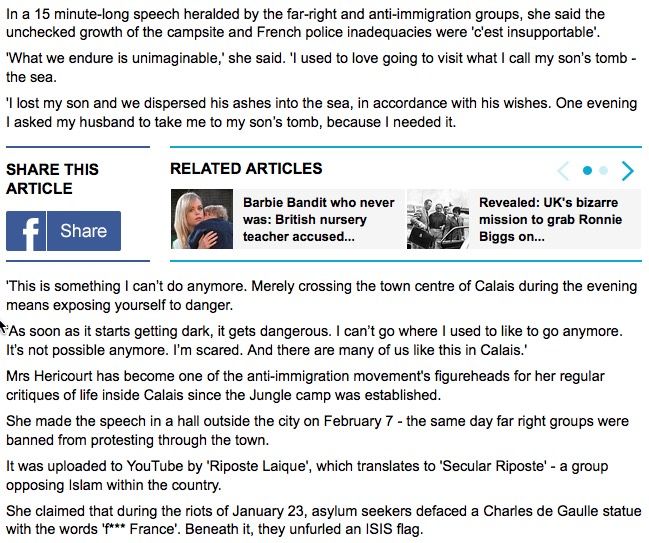 (No offense meant nor aspersions cast on the DM. The problem is clearly not there. Labeling classical liberals who actually fight for equality and rule of law as “far right wing” is clearly the cost of operations. If they meant it, the story would read differently)

7. Brutal attack on young woman in Hamburg by Illegal in Metro Station

These stories seem to be coming fast and furious now. Whether it’s in San Bernardino, California, Garland, Texas, Philadelphia, Pennsylvania, Detroit, Michigan or now in Montesano, Washington… terrorist supporting American-Muslims are being uncovered at an alarming pace.

The most recent example of this disturbing trend comes to us from a sleepy little hamlet in Washington state where a former soldier, now fisherman, was recently arrested on weapons charges, but whom the government will likely soon be charging for terror-related crimes as well.

9. Famed atheist Richard Dawkins suffers stroke — and now a debate over praying for him is lighting up Twitter

(And quite a stupid debate it is likely to be. Any atheist who opposes religious people praying for this great man’s recovery is a bigger believer than most who profess faith. If you do not believe in God, then you don’t care if people invoke one)

Speaking of Stupid, for anyone who reads this site and is not already frightened to hypertension about how government handles matters of actual importance, check out a BBC documentary where they took the actual people who would make the real decisions in a situation room in the event of a NATO conflict with Russia. Its called, BBC: This World 2016 World War Three Inside the War Room, but retired versions of them and watch them stupid their way into nuclear annihilation. Its like they were picked by their sibling’s tennis partners for the job. Not one of them seemed to be aware of what happened in the Ukraine or what the deal was with them to join NATO.

Gatestone has this article about oppression of academics asking the Turkish regime to stop slaughtering Kurds. It doesn’t go well for them.

Another speech from France after the Calais demo coming right up next.