1. Three Somali men who gang-raped white 16-year-old girl in bathroom of hotel where they had stayed to celebrate Eid are jailed for 30 years

Three Somali men who gang-raped a white 16-year-old girl in the bathroom of a hotel where they went to celebrate Eid have been jailed for 30 years.

Muhyadeen Osman, Bilal Ahmed and Mowled Yussuf, all now 20, were just teenagers when they attacked the girl at the Victoria Park Hotel in Manchester, regarding her as ‘easy prey’, the court heard.

The group, then all aged 17, had spent the previous night in the hotel with a number of other men as part of Eid celebrations when one of their friends, who had met the girl on BlackBerry Messenger, brought her round saying she should ‘meet his boys.’ 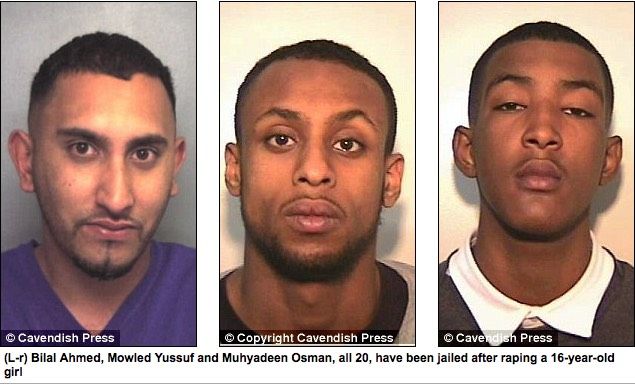 In the run up to the assault the group moved from room to room looking for unlocked doors to hide from a porter.

They eventually got into a bedroom where Yussuf was first to force the girl to perform a sex act on him in the bathroom.

Despite her repeatedly telling the group that she didn’t want to have intercourse, she was forced to perform a sex act on Ahmed before he raped her.

Osman then joined in after he had been ‘hanging around’ outside the door. He then moved her to the bed and raped her himself.

The video was taken from Arab sources and posted by 0404, a Hebrew-language Internet news site. Palestinians in Gaza during a roof collapse. (photo credit:Courtesy)

Problems appear to be coming in spades for the Islamist group Hamas and its followers in the Gaza Strip.

During a mass funeral for seven Hamas operatives who died after the tunnel in which they were digging collapsed due to the heavy rains that pounded the region earlier this week, a number of Palestinians required medical treatment when the ceiling of a kiosk in Gaza City collapsed under the weight of a number of people who were standing on the rooftop.

More footage of the funeral and additional collapses

America’s 14-year project to defeat the Taliban and build a stable Afghanistan is teetering on the brink of failure, according to a sobering report Friday by a government watchdog.

The Taliban controls more of the country than at any time since U.S. troops invaded in 2001, notes the quarterly report to Congress by the Special Inspector General for Afghanistan Reconstruction. The fragile economy is worsening. One of the few bright spots of the troubled reconstruction effort — getting more girls in school — has been tainted by allegations of fraud.

“The lack of security has made it almost impossible for many U.S. and even some Afghan officials to get out to manage and inspect U.S.-funded reconstruction projects,” wrote John Sopko, the inspector general.

(Should be interesting to watch most networks blame that on Bush)

5. Swedish police reveal they have dealt with 5,000 incidents involving migrants since October – and say the problem is increasing 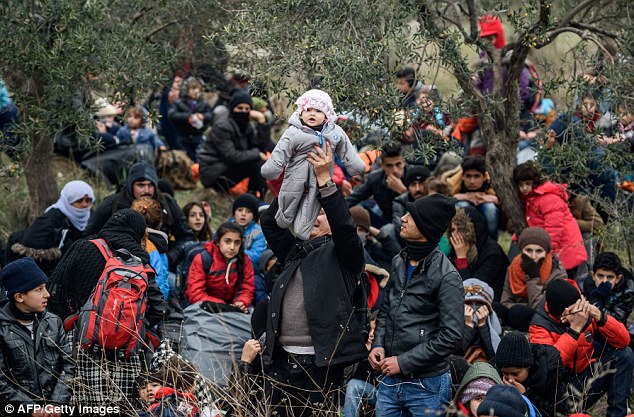 Swedish police have dealt with 5,000 incidents involving migrants since October as they revealed they are concerned the problems are getting worse. Above, migrants wait to board a boat in Canakkale, Turkey which they hope will take them to Lesbos, Greece, on Friday

Dan Eliasson, police commissioner, told SvD an increasing number of officers were needed to deal with the problems.

6. I have no idea what this fight was about but Ukraine politics seem a lot more visceral than Canadian. Mind you we just had an election.

7. British and US intelligence ‘hacked into Israeli drones’

British and US intelligence hacked Israeli drones’ video feeds, allowing them to watch in real time as Israel bombed Gaza and spied on Syria, according to documents leaked by American whistleblower Edward Snowden.

GCHQ and its US counterpart, the NSA, also monitored the drone footage in the hope of getting an early warning if Israel was attacking Iran’s nuclear facilities.

An Israeli soldier with a drone during a military operation to search for three missing Israeli teenagers in 2014  Photo: EPA

The revelations, reported by The Intercept, are the latest in a series of examples of how the US and Israel profess friendship in public but also spy intensively on each other.

(Because thats how the Obama admin treats its friends. One suspects it is a lot more honest with its enemies)

Canada rejected Wednesday U.S. security concerns over its fast-tracked resettlement of thousands of Syrian refugees, as the Senate in Washington prepares to hold a hearing on the repercussions for America.

“We have put in place layers of security activity to ensure that our refugee initiative with respect to Syria can be successful,” Canadian public safety minister Ralph Goodale told parliament.

“The program is working well and indeed it will resolve in something that Canadians can be very, very proud of,” he added in response to questions about why the Ottawa government declined an invitation to appear before the US Senate hearing.

Thank you M., Maria J., Wrath of Khan, ACT For Canada, and many more. The following video is probably not very good but on the plus side, its very short. I just felt I had to do it.

I think this space will be used for articles on the Clinton Email scandal, white house complicity, all of which seem tantamount to evidence that the US is just another tin-pot dictatorship now without rule of law and with presidential politicization of critical aspects of state.

Official: Some Clinton emails ‘too damaging’ to release

“I did not send or receive sex with that girl”