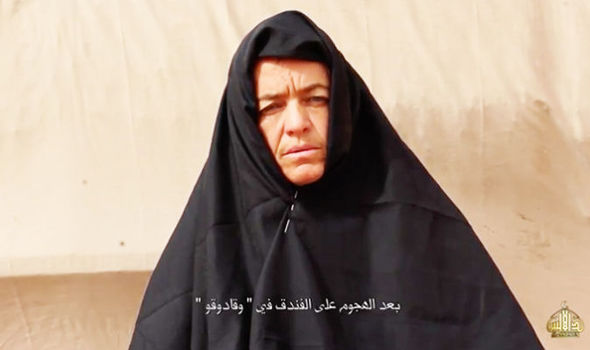 Beatrice Stockly was taken from her home in Timbuktu with the video demanding a jihadi be released in exchange for the nun.

The shocking eight-minute clip sees Stockly dressed in a hijab in front of an al-Qaeda banner draped in slogans.

Ralf Jäger, interior minister in North Rhine-Westphalia (NRW), has criticized the “concentration” of North African refugees in the western German state. He said many North Africans had been linked to crime in the region.

Speaking in Düsseldorf on Tuesday, Ralf Jäger (a Social Democrat) demanded a more equal distribution of North African migrants across the country. He said that NRW in was currently home to 80 percent of the Moroccan refugees in Germany, and to 50 percent of Algerian asylum seekers nationwide.

Jäger said the high figures were largely due to the close ties between the Federal Office for Refugees and Migration (BAMF) and specialists such as interpreters and country experts, based in particular regions.

As a result, refugees from Morocco and Algeria have been allocated across only four of Germany’s 16 states, namely NRW, Lower Saxony, Baden-Württemberg and Saxony.

3. The Alleged rape of a 13 YO Russian-German and police denial of the fact and coutner-accusation against the victim has Russians out on the street and organizing.

Mazin AbdulAdhim (a.k.a. Mazin Jillood), the owner of Halal “Bismillah Meats” in London, Ontario, is a senior cleric and activist with the Canadian branch of the global Hizb ut-Tahrir movement, which extensively promotes the idea of establishing the Islamic State, or the Caliphate, to unite all Muslims in the world under its supreme and exclusive Islamic authority.

On his official Facebook page (January 25, 2016), Mazin AbdulAdhim presented a hypothetical question dealing with the Islamic law with regard to enforced sex on the female partner in a couple relationship.

“If a young Muslim girl comes to an Imam and complains that her ‘boyfriend’ is demanding that she has intimate relations with him, but she wants to be married to him first before doing such a thing, would it be correct for the Imam to say ‘Islam commands the woman to obey her partner, and, in Canada, a common-law partner is equal to a husband, and therefore you are obligated to obey him as Islam commands?’” 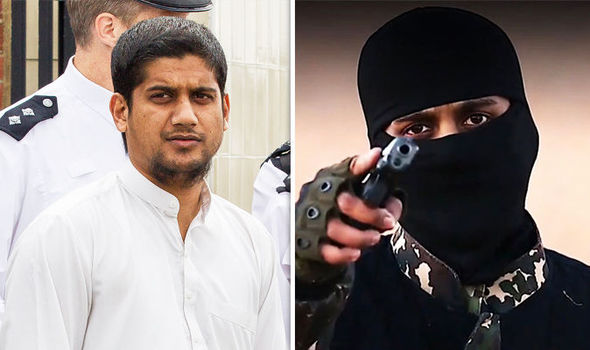 Siddhartha Dhar blasted the “evil” of “Zionism” in a hate-filled clip uploaded to YouTube moments before he fled to join ISIS in war-torn Syria in late 2014.

Praising the depraved Nazi leader, he said: “Other people were aware of this evil doctrine and they did things to stop it. Like Adolf Hitler.”

The sick terrorist’s nine-minute diatribe has emerged on Holocaust Memorial Day, which commemorates the millions of Jewish people who died at the hands of the Nazis.

6. Muslims are ‘not like us’ and will NEVER fit in with British society – ex equalities chief 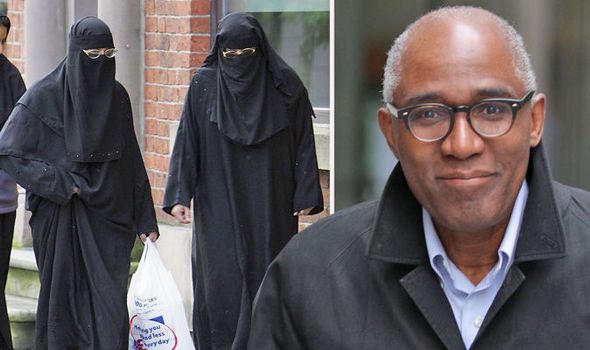 Trevor Philips has sparked controversy with his comments about Muslims

Trevor Philips, ex head of the much-maligned Equality and Human Rights Commission, has been blasted after claiming that Government efforts to integrate Muslim communities are “disrespectful” and should be stopped.

The controversial equalities chief said Muslims “see the world differently from the rest of us” and should not be asked to change to fit in with Western society.

But his remarks were attacked by faith campaigners, who said the assertion that Muslims are fundamentally different from others was dangerously incorrect and risked creating divisions.

Mr Phillips, who has previously described multiculturalism as a “racket” and slammed the political correctness which stops people talking about race, made the controversial remarks at a meeting of the Policy Exchange think tank in Westminster. 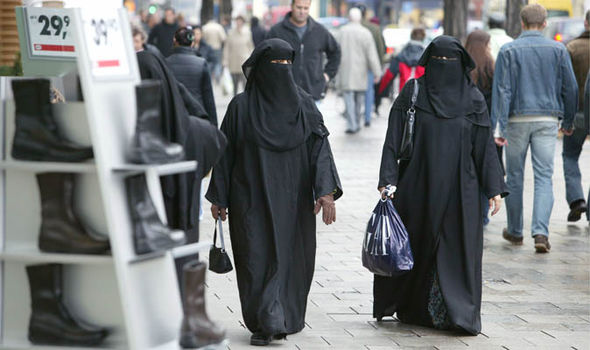 7. I just don’t think we should have to put up with this invasion’: Frenchman who brandished gun at migrant demonstrators at Calais insists he is not ‘anti-foreigner’ 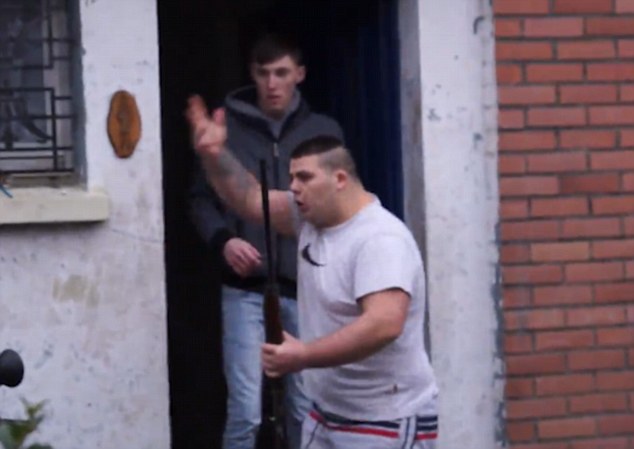 Gaël added: ‘I’m not political, and I’m certainly not anti foreigner – I just don’t think we should have to put up with this invasion.’

During the trouble on Saturday, a British left-winger could be heard calling the family ‘Nazi scum’, but Gaël, who is looking for work as a fisherman, said this ‘was ridiculous’.

I’m not political, and I’m certainly not anti foreigner – I just don’t think we should have to put up with this invasion.
Gaël, 21

‘We are just decent people who want to get on with our lives,’ he said. ‘We have a right to protect our homes, and will continue to do so, no matter what the threat.’

The makeshift migrant camp, known as ‘The Jungle’, is less than a mile from the social housing estate where Gaël’s family live in an end-of-terrace semi detached house with a small garden.

‘It was a terrible time for all of us, and my only thought was to protect my home and my family,’ said Gaël, who was born and brought up in the port town.

‘A small group broke off and started threatening my dad. They went straight for him and were shouting all kinds of insults.

‘Then stuff was thrown at us – mainly bike inner tubes that were lying nearby – and then they said they were going to try and get into our house.’

8. Muslims in Denmark caught with illegal machine guns: “Fuck all Danes. We will kill all and go to jihad. We are lethal to the West. Fuck Jews.” “‘Fuck all Danes. We will kill all, and go to Jihad. Looking forward. We are lethal to the West. Fuck Jews.’

This was the message from a 25-year-old Danish law students to his friend in a text message in the spring of 2015.

The message was sent a few days before the two friends with two other friends went to Malmo, Sweden, and according to police, bought two Scorpion machine guns and ammunition. …

…during the presentation today it emerged that at two of the accused’s residence in Copenhagen is found material of a religious nature. Including various religious scriptures from Hitz but tahrir.

(The religious material was most certainly from koran, hadiths and the example of mohamed. Distributed by Hitz but tahrir perhaps but that is a deflection)

“The Court of Appeal upheld the judgment today that Ikea killer Abraham Ukbagabir must be sentenced for life in prison.

This the 36-year-old Eritrianen knife attacked a 55-year-old woman and her adult son inside the Ikea in Västerås.

The man did not know the victims before, but told the hearing that the reason he murdered them was that they were “Swedish-looking”. He was unhappy that his request for asylum was refused and that he were to be deported to Italy.”

10. Cologne carnival organisers hand out leaflets telling migrants not to rape women or urinate in public in the wake of New Year sex attacks

(When you think about it, the US Gov’t is amazingly stupid for jailing Charles Manson for so long when they just needed to show him and his cult members a flyer that explains not to do break ins, murder, mutilate and write Beatles lyrics in other people’s blood) 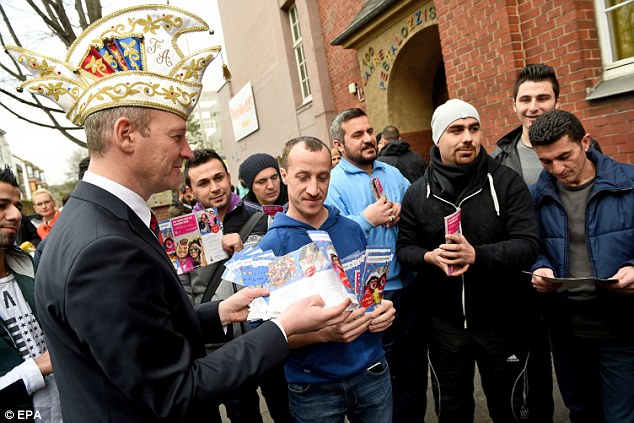 Cologne and Bonn carnival organisers have begun handing out rules for refugees for next week’s jollity – with warnings about women, alcohol and urinating in public.

The cities are on edge after mass sexual assaults by immigrants against hundreds of women on New Year’s Eve in Cologne. The number of complaints resulting from the frenzy in and around the main station now stands at over 820.

Carnival is, if anything, even bigger than New Year in the Rhineland where cities like Bonn, Cologne and Dusseldorf go crazy in a week long celebration of parades, parties, dances and fetes.

Thank you Wrath of Khan, M., Maria J., Buck, Nicolai Sennels, and all and a lot more to come.