An original translation by Anon

From this Czech news site: 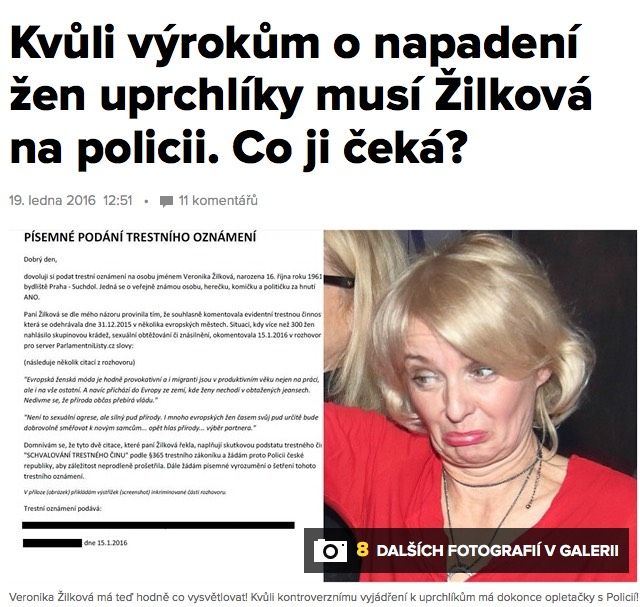 Veronika Zilkova has a lot to explain! Due to controversial statements regarding migrants, she faces entanglement in police matters. photo: Facebook, Herminapress.cz

Actress and community politician Veronika Zilkova is reaping what she had sown! Following her very unique defense of migrants who had attacked women during New Year’s Eve celebrations in Cologne on Rhine, she has become the target for criticism. “That woman has gone insane,” her fans agree and her words have even driven her to [the attention of the] police.

The actress Veronika Zilkova should, in the future, pay more attention to what it is she says.

When, in conversation with Parlamentni Listy [Parliamentary Papers], she had defended the migrants, who had groped and raped women during New Year’s Eve celebrations, saying this is just a ‘natural instinct’, she must surely have expected that her opinion would anger some people.

That she would become the target of hate and have to explain her statement to the police, that she certainly did not expect.

One of the groups from the social network Facebook had placed a criminal complaint against her.

“Mrs. Zilkova had, in my opinion, broken the law by condoning [positively commenting on] the obviously criminal action, which had taken place on the 31. 12. 2015, in several European cities. A situation in which more than 300 women had reported mass [group] theft, sexual harassment and rape, she had commented on on the 15. 01. 2016, in conversation with the server [online publication] ParlamentniListy.cz , states an excerpt from a criminal complaint, which had been handed to the Police of the Czech Republic on the 15th of January.

I would like to make a criminal complaint against the person named Veronika Zilkova, born on the 16th of October, 1961, currently residing in Prague-Suchodol [suburb of Prague]. This regards a publicly known figure, an actress, comedianne, and politician behind the [political] movement ‘YES’.

Mrs. Zilkova has, according to my opinion, broken the law by comments [she had made] which were in agreement with [condoning/approving of] obviously criminal activity, which had taken place on the day of 31. 12. 2015 in several European cities. A situation in which more than 300 women had reported theft, sexual harassment or rape, she had commented on on the 15. 01. 2016, in conversation with server [online publication] ParlamentniListy.cz using the following words:

(the following are several quotations from the conversation)

“European female fashion is highly provocative and the migrants are of an age [that is] productive not only for work, but also for all else. And to top it off, they are arriving in European countries where women wear tight jeans. Let’s not be surprised when nature takes its course.”

“This is not sexual aggression, but a strong natural instinct. Even many European women will, in time, follow this natural instinct and voluntarily head towards these new males…again, the voice of nature…choice of a partner.”

In my opinion, these two quotes, which Mrs. Zilkova had uttered, fulfill the real basis of the criminal act of “CONDONING OF A CRIMINAL ACT” according to paragraph 365 of the criminal code and, therefore, I request that the Police of the Czech Republic should investigate this matter most thoroughly. In addition, I request a written finding regarding the outcome of this criminal complaint.

Attached is (image) including the screenshot of the incriminating portion of the conversation.

Zilkova herself claims to know nothing about the criminal complaint. When we had tried, many times, to contact her, her phone had been turned off and she refused to comment on these news items.

According to our sources, the calamity [happening to her] on social media had struck her deeply. “She does not know who is saying what about her, and that makes her very nervous,” one of her family members had told us.

Zilkova should, in the future, better consider if it is suitable that she, as a community politician and the wife of the Minister of Defense, should publicly speak about such a sensitive and current, problematic topic, regarding which she seems to not have the full facts.

To top this of, since her main occupation is an actress and artists, and so we are dealing with a public figure.

It is not surprising that, unlike people who follow current news events, her statements – among which is that women are responsible for the attacks on themselves because of their choice of fashionable clothing – have angered even those people who have, in the past, defended her.

“Veronika belonged among my favourite actresses and entertainers. But, following these statements, I am done with her. She is insane,” is just one of the comments. The others are similar in spirit, but sharper [in the wording].

Perhaps the actress will learn from this situation and, in the future, be more considered in her public statements. Or, perhaps, [she will make] none at all.

Perhaps that may be the best thing she can do.

2 Replies to “Due to statements about women attaced by migrants, Zilkova must go to police. What awaits her?”