1. Via Rail terror plotter wants to be tried by laws of Qur’an

TORONTO – One of the Via Rail terror plotters is seeking an appeal because he wants to be tried by the laws of the Qur’an and not Canada’s Criminal Code.

Chiheb Esseghaier — who was convicted of plotting to derail a passenger train — appeared before Justice Kathryn Feldman of the Ontario Court of Appeal Wednesday via video-conferencing from his prison cell.

The convicted terrorist filed an inmate appeal and had lawyers Joseph Di Luca and Erin Dann appointed by Feldman to act in his best interest during the court process — including other avenues of appeal.

Esseghaier’s co-accused, Raed Jaser — who was also convicted of terrorism charges last March, filed a notice of appeal with the Ontario Court of Appeal in November and is asking for a new trial.

(How peculiar that there are no comments under that story)

2.USA: Cuts on American mortgage tax breaks, but hundreds of millions of US spending on rebuilding on FOREIGN MOSQUES

3. Switzerland follows Denmark’s lead to seize assets from refugees to pay for upkeep

Switzerland says it will introduce legislation which will force refugees to hand over cash and valuables to the authorities to help pay for their upkeep. The move by the Swiss follows a similar plan implemented by Denmark.

Refugees arriving in the Alpine nation will have to turn over any assets they possess which are worth more than 1,000 Swiss francs ($997).

“If you have property worth more than 1,000 Swiss francs when you arrive at a reception center you are required to give up these financial assets in return for a receipt,” an information sheet for refugees states, as cited by Reuters.

However, the move has been met with condemnation by human rights groups, who have called it “undignified.” Stefan Frey from refugee aid group Schweizerische Fluechtlingshilfe said that the practice “has to change.”

4. British charity for Calais migrants is condemned for saying truck drivers who complain about refugees attacking their vehicles should ‘change their jobs’

(It should also be known that there is likely a policy in place where if a truck is boarded by a migrant, the goods all have to be thrown out. This is resulting in very real shortages in the UK and is a defacto siege on England)

The founder of a British charity has outraged trucking chiefs by claiming lorry drivers who complain about attacks by migrants in Calais should just change jobs.

Clare Moseley, the founder of Care4Calais, said it was ‘not the end of the world’ if the drivers were forced from their work and claimed they still had a ‘safe future’.

Haulage chiefs condemned her comments as ‘absolutely outrageous’ and say their drivers fear for their lives as they are forced to run a gauntlet through the area delivering goods to Britain.

5. More Brits signing up to fight with jihadist militants in Iraq and Syria than for the UK Army Reserve

Just 170 extra reservists enlisted over the past year – despite a Government target to boost the stand-by force by 11,000 by 2018.

But at the same time the brutal al-Qaeda inspired ISIS forces tearing through Iraq have been boosted by ‘several hundred’ Brits, ministers told MailOnline.

(Well. Muslim immigration worked out well then. Didn’t it.)

The four boys attended the Schlossstrasse middle school in Salzburg. It was only in the wake of the widely reported New Year sexual assaults in Cologne that one of the victims, aged 14, made a complaint to police.

That resulted in the four youngsters, aged 14, 15 and 16, being suspended. Only one of them had a residence permit.

According to a report in the Kronen Zeitung newspaper, three female students say they were assaulted and groped by the boys for months.

Last Wednesday an attack on one girl was reportedly so severe that it came to the attention of the school headmistress Eva Szalony, who made a complaint to police.

She said the allegations were “a complete shock” and that the school is now  investigating why the girls had suffered for so long without reporting the abuse.

She said that the male pupils had all come to Austria as unaccompanied minors from Syria and Afghanistan and she believed them to be happy and grateful for being allowed to live in Austria and attend school, adding that “they were integrating themselves very well”.

7. Chilling CCTV captures the moment a woman wearing a kangaroo headscarf tried to stab a 15-year-old boy on a London bus with an eight-inch kitchen knife

This is the moment a woman tried to stab a 15-year-old boy with a kitchen knife as he boarded a bus with his grandmother.

Police said the 51-year-old defended her grandson when he was approached by the woman on a route 133 bus on Brixton Road, in south London.

The suspect, who was already on the bus, attacked the boy before his grandmother intervened. 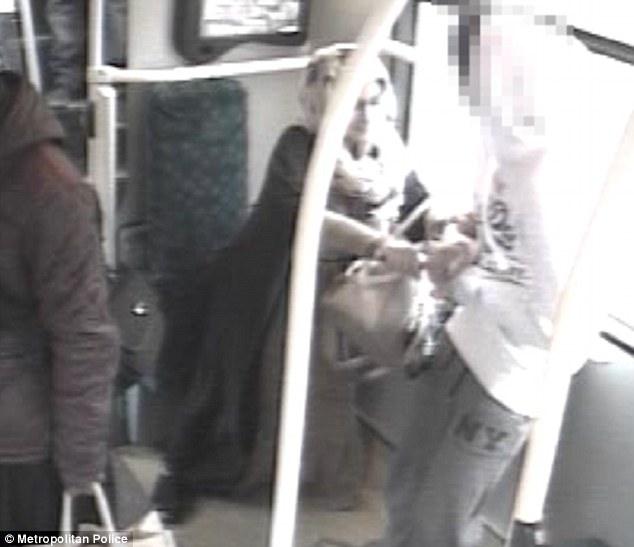 (It is almost like there will be open warfare on the streets of major Western cities in 2016 in a way. CCTV at link)

Hearing evidence during the Rotherham abuse trial, a jury at Sheffield Crown Court has been told that a policeman and a councillor played their part in a deal for one of the grooming gang defendants to hand over a missing teenage girl in exchange for not facing prosecution.

The officer and a man described by one the alleged grooming gang victims as “a councillor of Rotherham” were both involved in an alleged agreement for Arshid ‘Ash’ Hussain, 40, to hand over a teenange victim rather than face arrest for kidnapping, reports the Sheffield Telegraph.

The girl in question, known at trial as Girl J, is now 30 years old, but when she was in her early teens she would regularly go missing from home to be with Mr. Hussain.

Via video evidence she said that on one such occasion he was contacted by people warning him he risked being arrested for kidnapping her. She recalled:

“I remember being in the car with Ash and everybody was ringing, there was both his brothers, there was Akhtar which is some kind of relative.

“They was basically saying, ‘You need to get her back home sharpish’.

“I remember him being stood outside a phone box and he was on the phone to PC Ali.”

Girl J explained that PC Ali was someone Mr. Hussain had extensive involvement with and with whom he “got on really well”. After the warning call Mr. Hussain returned to his car to tell her she had to go back.

9. Swedish journo under fire for reporting about sexual assaults by migrants

10. German Christians are going to have to take the Church back from cultural Marxists and useful idiots.

(It would be interesting to hear from these people dictating to Christians what Christianity is, when the last time they went to church was, or what they know about it all. Video at site)

London (CNN)Germany’s Cologne Cathedral turned off its lights Monday in a symbolic rejection of an anti-Islamification rally taking place in its shadow.

The protest group “Patriotic Europeans against the Islamization of the West,” or PEGIDA, called for people to take to the streets at 5:30 p.m. (6:30 p.m. GMT) Monday in the cities of Cologne, Kassel and the German capital Berlin.

It follows a December 22 protest in Dresden during which the city’s opera house — Semperoper — turned its lights on and off to signify its rejection of PEGIDA. Semperoper has a banner reading “Refugees are welcome here” as its main profile image on Facebook.

Abdi Hersy is an Imam at Abu Bakr Musallah in Calgary, Alberta and a prominent voice in Calgary’s Somali community.

Addressing his congregation last year, Abdi Hersy strongly condemned the Islamic State (a.k.a IS, ISIS, ISIL, the Caliphate) and argued that joining the jihad in Syria and Iraq has no valid Islamic justification nor it has been approved by any of the Muslim scholars.

Abdi Hersy thinks that the best course for Muslims in Canada is doing Dawah, meaning propagating and spreading Islam by spurring Muslims to practice Islam and by introducing Islam to unbelievers in an effort to convince them to convert to Islam.

The following are excerpts from Abdi Hersy’s lecture (the video was uploaded on YouTube on February 17, 2015):

(48 minute video. You may want to click over and read the summary)

(See also: Abdi Hersy: “You have to choose either Allah or Canada”; wife must obey and serve her husband)

12. Israel would like to point out that isalmic terror is the same everywhere, but perhaps is not viewed as such when its in Israel.