Hundreds of anti-refugee rioters have gone on the rampage in the German city of Leipzig after a demonstration where they called for asylum seekers to be deported and their nation’s borders closed.

The attacks come just hours after Chancellor Angela Merkel admitted that Europe had lost control of the crisis. The right-wingers broke away from a largely peaceful march in the eastern city to trash the suburb of Connewitz.

Doner kebab fast food stalls were destroyed, cars set ablaze and shop windows smashed by around 250 hooligans of LEGIDA – the local branch of PEGIDA, the anti-migrant, anti-EU organization which marched against the refugees earlier in the evening. 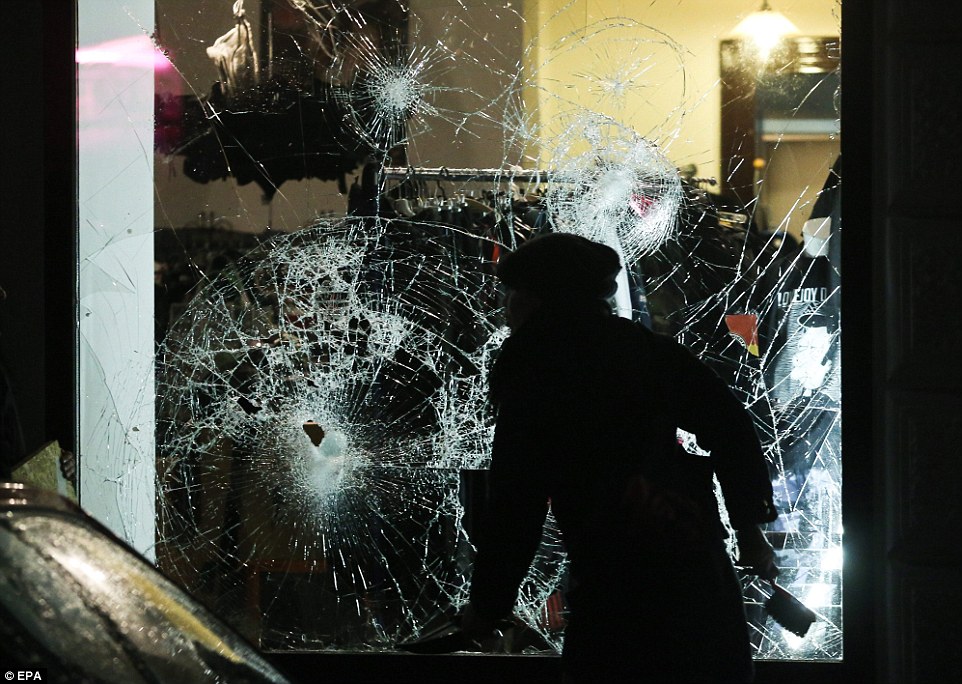 (All the best suicide bombers are Saudi. The culmination of 1400 years of solid islamic culture and belief. Of course it took the unbeliever to invent high energy chemistry, but they sure know what to do with it)

Suicide bomber, that has blown himself at the heart of touristic Sultanahmet district of Istanbul, has been identified as Nabil Fadl? of Saudi Arabian origin, born in 1988.

A blast has killed at least 10 people and injured 15, 11 of them told to be foreigners.

Nine of these injured people were German, while two others were from Norway and Peru.

Investigations of police continue to enlighten the links of the attacker.

A TEENAGE girl was surrounded and attacked in a swimming pool in the latest of a series shocking sex assaults emerging from Germany. 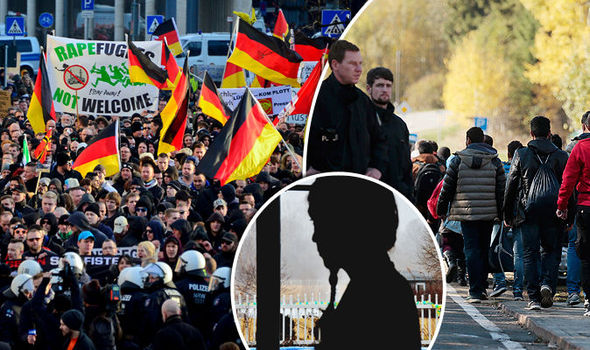 Police said they have detained migrants in three more cases – one of which was traced to an asylum centre.

It comes as legal programmes have been launched for migrants, addressing areas of sexual equality and freedom of speech.

The classes, launched in Bavaria, are voluntary, and officials say they were planned before widespread assaults on women were revealed.

Tensions in the country are at breaking point as protests and counter-protests over the New Year’s Eve attacks in Cologne spark riots.

4. ISIS burns its own fighters alive for losing Ramadi to Iraqi troops in terrifying warning to other militants after they fled to group’s stronghold of Mosul

(The Islamic State, influenced by the Koran 99% but maybe 1% Dante Alighieri)

Islamic State fighters who lost a town to Iraqi forces were burned alive after they fled to the group’s stronghold of Mosul, it has been reported.

Residents claim the jihadists were set alight in the town’s main square in a terrifying message to other militants who may be forced to defend Mosul from an attack.

The fighters had been driven out of Ramadi, the capital of Anbar province, two weeks ago in a major setback for their aims of creating a caliphate across Iraq and Syria.

‘They were grouped together and made to stand in a circle. And set on fire to die,’ a former Iraqi resident now living in the U.S. but remains in contact with family in the town told Fox News.

Other Iraqis with relatives in Mosul said defeated ISIS militants were being punished for not martyring themselves in battle.

Michael Pregent, a terrorism expert and former intelligence adviser to General David Petraeus in Iraq, said: ‘There is no surprise on executing ISIS fighters from Ramadi.’

5. Birmingham Central Mosque chairman will be city’s next Lord Mayor

The chairman of Birmingham’s Central Mosque has been selected by councillors to become the next Lord Mayor of Birmingham.

Councillor Mohammed Afzal was chosen by Labour Party colleagues to become the First Citizen of Birmingham after the May local elections.

As the current chairman of Birmingham Central Mosque on Belgrave Middleway he is a keen advocate of forging links with other faith groups and playing full part in the wider city. The Mosque recently hit the headlines after it set up winter soup kitchens for the city’s homeless .

(Let’s see how that goes)

6. Donald Trump on the Tonight Show

7. Video claims to be of a terrified German woman dragged on to subway by the usual pirates, thugs and haters of the unbelievers in the pirate mohamed. But I feel this needs substantiation. Thats a lot of English and scribbly for a German subway entrance.

*** UPDATE *** It was an authentic video from last year and in Egypt. I took it down

8. Jewish teacher speaks about the attack on him by a sane, non-redical religious muslim who wanted to kill a Jew. More here

9.  Jews in Marseille urged not to wear skullcaps

The president of the Marseille Israelite Consistory, Zvi Ammar, said that it was an “exceptional decision”.
“Life is more sacred than anything else. We are now forced to hide a little bit,” he told the AFP, adding that the move made him “sick to the stomach”.
The warning comes just one day after a teacher in his thirties was attacked by a teen wielding a machete.
The teacher escaped with only minor injuries. His attacker, aged 15, was caught soon after fleeing and arrested.

10. Cleanup after Germans took revenge on muslim owned shops for the litany of muslim crimes against Germans, but mostly for the Silvester rape night.

(WARNING: There is a wicked 60 Hz. hum on this video. Turn your volume down if using headphones)

(Wow its almost like they get their intel from this site)

French anti-terrorism experts believe the two major attacks in Paris in 2015 were a “dress rehearsal” for more professional and better-organised terror attacks on a much larger scale in 2016.

The January 2015 attacks on satirical magazine Charlie Hebdo – which had angered many by publishing cartoons of the Prophet Mohammed in 2006 – was the first in three days of attacks that claimed a total of 17 lives.

On November 13, gunmen in Paris killed 130 people in a series of coordinated attacks, the deadliest assault on French soil since World War II.

As bad as the carnage was, many experts agree that with the number of attacks on a definite upward swing, the threat will get much worse in the coming year.

“Unfortunately, I think 2015 was nothing,” an unnamed French senior counter-terrorism official told AFP last week. “We are moving towards a European 9/11: simultaneous attacks on the same day in several countries, several places. A very coordinated thing. We know the terrorists are working on this.”

(Do we even know what happened with the planned attack on the train station in Germany? Not the one the German government covered up that is out now, but the Christmas one with bombs? What did they find? Why is there no new news on that? Was it in fact Sarin gas and explosives like Homeland predicted? Why was their a total shut down on all information on that in German and English news, or so it seems?)

As I read the story in Item 4. of how the Islamic State treats its returning fighters, it seemed to me that was something out of Dante’s stunning poem, the Inferno, about a living man’s trip through hell. It further occurred to me that in Dante’s work he very likely wrote about Mohamed and gave him a special place in hell. So I googled for it.

The result is a brilliant laugh as the fearful political correctness of the webpage had to somehow describe what Dante had written about Mohamed in a way that made the Christians look worse than the Muslims and Mohamed that they wrote about. Even to the extent of adding unrelated content suggesting Mohamed was actually a Cardinal. Something which I am pretty sure was not in The Inferno. Check out the first bit below: 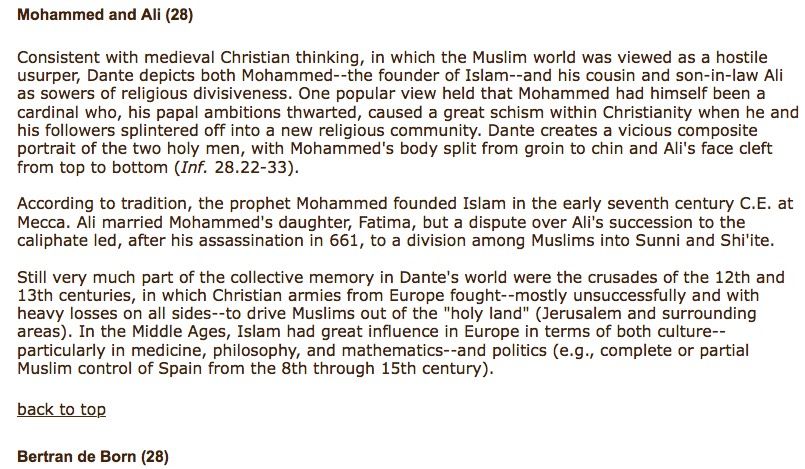 “Consistent with medieval Christian thinking, in which the Muslim world was viewed as a hostile usurper, Dante depicts both Mohammed–the founder of Islam–and his cousin and son-in-law Ali as sowers of religious divisiveness.”

Wherever could the medieval Christians ever get that idea?

Lastly, in a contest between Allah and German train schedules, who wins?