Police in Turkey say they have confiscated more than 1,000 fake life jackets made for migrants wanting to cross the Aegean Sea to Greece.

Officers raided a workshop in the port of Izmir, where they say they found life jackets stuffed with packaging rather than buoyancy aids.

On Tuesday, the bodies of 34 migrants were found along Turkey’s coast. Many were wearing life jackets.

Several children were among the dead.

Angela Merkel attended a meeting on Wednesday with representatives of the Christian Social Union (CSU), sister party of her Christian Democratic Union (CDU), after a tense previous appearance in November alongside state premier Horst Seehofer.

Meeting with CSU representatives in the Bavarian town of Wildbad Kreuth, Merkel again rejected proposals for capping the number of refugees allowed into Germany in 2016.

“There exist some varying positions. That will probably not change in the discussion today,” Merkel said, referring to CSU chief Horst Seehofer’s desire to implement a natiowide ceiling of 200,000 refugees this year.

Seehofer himself said people shouldn’t expect him and the chancellor to reach an agreement on the issue, telling reporters to forget the idea that “we’re going to have a completely new refugee policy” by tonight. “I stand by my claim that we need a change in refugee policy this year,” he said.

Other CSU officials, such as the party’s Bundestag chairwoman Gerda Hasselfeldt, echoed Seehofer’s comments. “That is a benchmark that makes it clear: We need a stronger limit,” Hasselfeldt said, referring to the proposed cap.

3. Tommy Robinson on the mass molestation and robbery of German girls in 3 or 4 cities on New Years Eve

4. ‘Syrian refugees’ trying to board flight to UK arrested on suspicion of terrorism 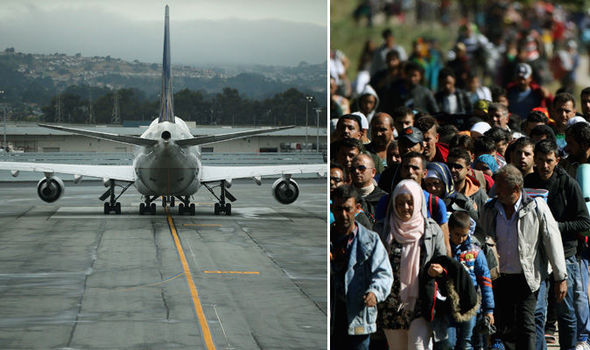 Fears the pair, who claimed to be Syrian refugees, were linked to jihadis were raised after anti-terrorism officers found images of violence and war on their smartphones.

The pair, understood to be brother and sister, were arrested at Cristoforo Colombo Airport in Genoa, Italy, while trying to board a plane for London.

The 31-year-old man and 24-year-old woman were promptly arrested after police found their travel documents were forged.

It’s not very likely that any of the men who harassed dozens of women in Cologne on New Year’s Eve will be convicted, says Cologne-based criminal lawyer Nikolaos Gazeas.

DW: Identifying the men who may have participated in the sexual assaults, harassment and thefts in Cologne on New Year’s Eve is proving to be a problem. If you don’t know who they are, the chances of arresting them are almost nil, right?

Nikolaos Gazeas: That’s true. The chances of convicting even one of the perpetrators are slight.

All the same, what is needed in order to take penal action in these cases of massive sexual assault, even including theft in many cases?

6. Ottawa Canada Shiia protest the execution of a cleric in Saudi Arabia

(I wonder if these fake liberals protesting the “atrocious crimes of the Saudis” would equally condemn the hanging of homosexuals from cranes in Iran for being homosexuals or the torture of Christian converts in Evin prison for converting to Christianity?)

7. What Pisses Me Off About The Germany Rape Attacks

(This is really, really good) 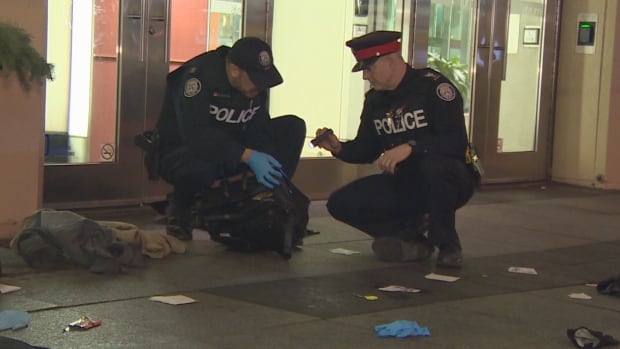 A man has been charged with attempted murder following what police call an unprovoked attack on another man near Toronto’s Eaton Centre Wednesday afternoon.

A witness, Terence Yip, who works in technological support and maintenance for CBC, told CBC News that he was heading south on Bay Street when he heard yelling. He said one man was swinging at a man who was holding a guitar. Yip said a woman was yelling for police. He said a lot of people were in the area at the time. 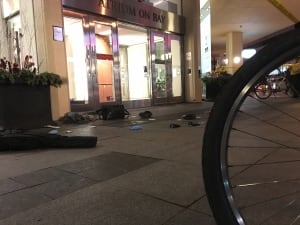 Clothing is left strewn on the ground after a man wielding a machete was tackled by security guards near Toronto’s Eaton Centre. (CBC)

Yip also tweeted that the attacker, a black man, yelled “F–k white people” before allegedly attacking the victim, who is white. He said the alleged attacker’s machete was “probably the length of my arm. It was pretty big, a substantial weapon.”

(Nauseatingly spun for the narrative)

Thank you Wrath of Khan, M., Dagawker, Gates of Vienna, PePi, and many more. No post script on this one, too much still to do.