2. Here is a cool chart showing number of UMIs at Hungarian border in the last 30 days

(Graph at link is interactive and dynamic. Below is static Screen cap) 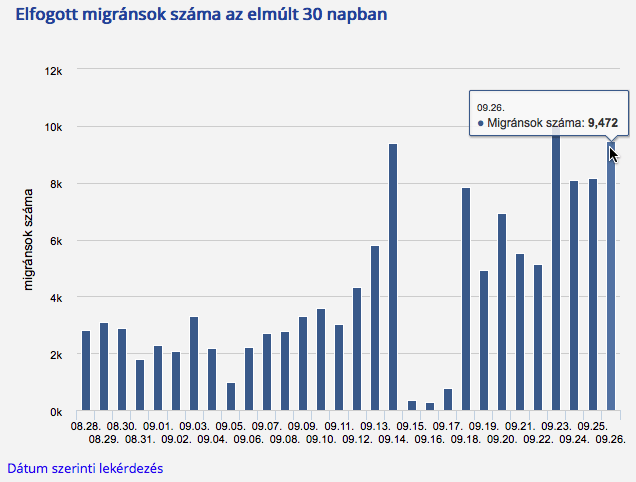 3. FOX Oped. Should we listen to Bill Maher?

Bill Maher seems to understand something that virtually none of his peers on the left understand. While the debate remains exclusively about “radical Islam,” ironically enough, you’ll often find that the most “moderate”, tolerant Muslims fit the exact description of the left’s perception of the stereotypical racist, sexist, homophobic, religious fanatic right-wing conservative that they profess to fear and loathe.

4. UMIs continue to head to the Croat Serb border in record numbers.

Claiming that children minds should not be distracted by religion, Uzbekistan pro-Russia government has banned children from attending regular Friday and `Eid prayer in mosques, in the latest violation of their religious rights.

The government’s position was that “children’s brains should not be distracted” from school studies by religion, Ubaidullo Azimov, said a local official in Tashkent.

Azimov added that the government thinks children should only learn what is taught at school, and that religious studies should take place only after students have finished their high-school studies.

(Wow! Uzbekistan actually has a grip on classical liberal thought!)

The local official was referring to the latest order issued by Uzbekistan’s Education Ministry on September 23 which imposed a fine of about $750 on parents if their children were caught by the authorities in mosque.

(Equivalent to over a years pay at min wage!)

Austria’s populist, right-of-center Freedom Party has doubled its share of the vote in a regional election amid concern about the influx of refugees in recent months.

Preliminary results put the Freedom Party in second place, with 30.9 percent of the vote in Sunday’s Upper Austria election — compared with the 15.4 percent it received in 2009.

7. UMIs race winter for a meal ticket and a crowd funded home

8. Turkish nationalists called ‘Kamalists’ chanting down with the PKK in Stockholm Sweden

Interesting that one doesn’t see any ‘antifa’ anywhere near. This pretty much tells us what we need to know about that group’s real politics.

10. UMIs getting frustrated with Sweden as a life long spa stop

11. Ok New info on this march in Poland:

From Green Infidel, our man on the ground there:

The main chant is “Poles against immigrants” – which is the? slogan of the series of marches across Poland, over the past month.

The banner says “Every Arab should remember. For us Poland is a sacred thing”.

Btw, this march is in Slupsk – a city with a mayor, Robert Biedron, who earlier was Poland’s first openly-gay member of Parliament. After taking office, one of his first actions was to take down a portrait of Pope John Paul II from the city hall, and then he announced that there would be “parity” in naming streets (one street named after a woman, for every one named after a man). Recently, he has been a very vocal? supporter of Poland taking in more refugees, and has said he “doesn’t mind if the city is full of Poles or full of Syrians”.

The “Gazeta Wyborcza” newspaper is one of his biggest cheerleaders, having touted him? to be Poland’s next president, and he has a big fanclub among the newspaper’s most loyal readers.

Thank you M., Kathy, Wrath of Khan, Green Infidel, Buck, Baron at GoV., Perfect Child, and all who commented and sent in links.