Study on “Muslims in Germany”: 94 percent is against integration, 24 percent of young Muslims inclined to violence, 51 percent think Islam will prevail on Earth

In the nineties, the survey of Heitmeyer and others already put their emphasis on the meaning of Islamic organizations and associations. Nearly half of the Islamic youths showed attitudes which can be identified as Islam-centered claims of superiority. Moreover there were tendencies analyzed which were based on a religiously motivated will to use violence. About one third of the youths showed this kind of thinking which is closely connected to the Islam-centered claims of superiority on the one hand and traditional conservative views on the other hand.

2. Revealed, ISIS has executed more than 10,000 men, women and children in Iraq and Syria since last year… and that doesn’t include thousands more killed in battles, suicide bombings and cut down as they fled

ISIS has executed more than 10,000 people in Iraq and Syria since declaring a ‘global caliphate’ in June 2014, MailOnline has learned.

The Syrian Observatory for Human Rights (SOHR), which has secret sources inside ISIS territory, said 3,207 have been killed in that war-torn country.

Another 7,700 were executed in Iraq, according to the Iraqi Observatory for Human Rights, which tracks ISIS violations.

The soldiers and civilians who have been beheaded, shot dead, drowned, blown up, stoned to death and thrown off buildings for violating ISIS’s twisted laws all contributed to this mammoth death toll.

The figure does not include the thousands more who have been killed in battle and suicide bombings – or the innocent people mown down by ISIS extremists as they tried to flee.

(Scroll down for video at DM link above) 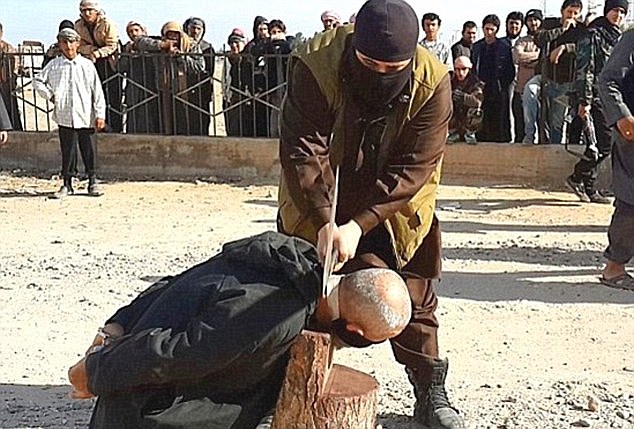 Executions: The terror group has released hundreds – if not thousands – of propaganda images and footage of civilians and enemy fighters being killed for breaking its strict laws

“Fanaticism consists in redoubling your efforts when you have forgotten your aim.” – George Santayana

I would not say that the apologists for Islam, even the most shameless, have forgotten their aim. I think one of their highest hopes is that we, the opponents of Islam, forget the aim of these apologists, which is to achieve in the Western world, if not complete political clout and religious preponderance, then, for the time being, a reputation for good the religion of Islam has never acquired complete possession of. They are contented with the fact that we are conveniently distracted by the many violent examples of Islam’s most extreme blood-junkies while the less noticeable proponents of this insalubrious faith, with all the privileges our Western democracies provide, stealthily emasculate all willingness on the part of our elected leaders to resist the erosion of our traditions and our freedoms. We are asked to combat and halt the expansion of ISIS in the Middle East while simultaneously the apologists for Islam here condemn us for not accommodating the same religious garb the ISIS henchmen require their multiple wives and traumatized sex-slaves to wear over there.

5. EU refugee summit in disarray as Tusk warns ‘greatest tide yet to come’

Donald Tusk, the president of the European council, who chaired the summit, warned: “The greatest tide of refugees and migrants is yet to come.”

In a barb directed at Merkel and Jean-Claude Juncker, the president of the European commission, Tusk added: “We need to correct our policy of open doors and windows.”

The summit pitted the governments of central Europe against Germany and France after Berlin and Paris on Tuesday forced a new system of imposed refugee quotas on a recalcitrant east. There was talk of boycotts and threats to take the issue to court from the Czechs and Slovakians.

Merkel singled out Turkey as the key to a crisis management strategy and Juncker said the fundraising would include a billion euros for Ankara.

But Tusk, just returned from Turkey, said money “is not the big problem. It is not as easy as expected.”

Ahmet Davuto?lu, the Turkish prime minister, wrote to the EU leaders on Wednesday demanding bold concessions from the Europeans as the price for Turkey’s possible cooperation. He proposed EU and US support for a buffer and no-fly zone in northern Syria by the Turkish border, measuring 80km by 40km.

This would stymy the Kurdish militias fighting Islamic State in northern Syria and would also enable Ankara to start repatriating some of the estimated 2 million Syrian refugees it is hosting. The militias are allied with the Kurdistan workers’ party (PKK) guerrillas at war with the Turkish state for most of the past 30 years. Ankara reignited the conflict in July after the ruling Justice and Development party (AKP) lost its parliamentary majority in a general election.

(Anyone else think its time to kick Turkey out of NATO?)

Thank you M., Richard, Wrath of Khan and all. I really lost track on this post but will catch up! Coughlin #4 should be available this evening or tonight. Please feel free to start a discussion on this brief with any thoughts you may have on it in the comments.