An essay by Ann Marie Waters on the eve which was supposed to be the Mohamed Cartoon exhibit in London.

Most readers are aware that Anne Marie Waters had planned to host a Mohammed cartoon exhibit in London today, but was forced to cancel the event due to the credible threat of violence against it. In response, she wrote the following essay on the significance of what did not happen today. 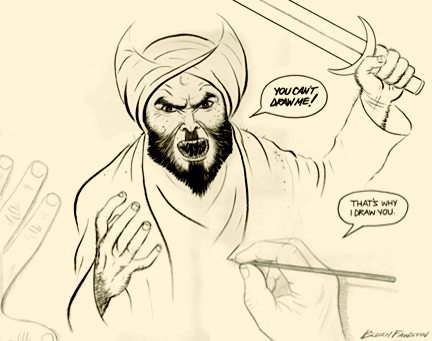 This is not how I expected to spend September 18th. I was supposed to be hosting an exhibition of harmless cartoons, along with others in this country and elsewhere who know the true value of freedom. Instead, I will write about it — while I still have the freedom to do at least that.

The Mohammed cartoon exhibition did not take place in London, not only because of the threat to those involved, and their families, but also because the Left went for our jugular and ensured that others would not support us. The despicable Hate Not Hope (I refuse to write that group’s name as they do), put together a complete fiction, aiming to intimidate others and discourage them from joining us. The far-Left extremists, accompanied by a Christian extremist, pretended that Tommy Robinson and I were using the cartoons to incite civil war. This was based on about ten minutes of speculation, to my memory, mostly initiated by said Christian extremist, stuck within about four hours of conversation — mostly about the Sharia Watch website. This is how low the Left is willing to stoop. Another left-wing blogger wrote that I might sue Vive Charlie; something else based on no truth whatsoever.

(Please continue at Gates of Vienna)

3. Muslim Brotherhood/OIC ‘Interfaith’ groups demand action from the US on Syria.

(For anyone uncertain about this group, their motives, their ideology etc. Please watch the series The Red Pill Briefs for a fully factual analysis and history of exactly who this group is and what they seek to achieve)

4. Short report on the missile attacks on Israel today

5. UMI’s doing that thing they do on the street on their way from Turkey to your house.

A photo from an ABC site:

(It should be noted that at least two of the people in this group of Arse to the Stars worshippers are Al Azhar imams. This means that they are graduates of the most prestigious islamic institute in the world by orders of magnitude beyond any other. It means that they have status and prestige in any Islamic community they go to in the world. You can spot them by their white hats with the red tops. To have them in this group is like spotting a couple of 4 star generals or admirals in a group of people you think are soldiers but are out of uniform) This is a photoshop. It did not really occur

6. Moscow Central Mosque to reopen on eve of Eid

(Links from this site often do not work. You may have to search the page that appears for the headline to get the article)

Moscow’s Central Mosque will reopen on the eve of Eid al-Adha, also called the Feast of Sacrifice, with Turkish President Recep Tayyip Erdo?an among the guests attending the event, Anadolu Agency has reported.

The ceremony will also be attended by Russian President Vladimir Putin and other world leaders, the agency said.

The mosque – also known as Moscow Cathedral Mosque and the Moscow Jum’ah Mosque – was demolished four years ago and has been rebuilt to house 10,000 worshippers.

The reopening on Sept. 23 will see a new complex 20 times larger than its predecessor at 19,000 square meters.

7. Al Jazeera video on the road to Germany.

Thank you M, Richard, Yucki, Kathy and so many who sent in materials.

I often suggest people check the comments under daily links posts but that is ramped up a notch now as it will take some serious time to edit the Coughlin videos. So there won’t be as many official posts as usual. So please everyone who visits the site, try and check the list of links the regulars provide under each day’s daily links post. Of course for things that actually manage to make it above the already horrific level of civilization jihad that is the new normal, they will get posted.

2 Replies to “Generals among the soldiery all posing as victims and ‘refugees’, Canadian judge gives Khadr everything except the Order of Canada: Links 1 on Sept. 19 – 2015”